SMA Involvement in Nigeria goes back well more than a century. Father Joseph Oswald Timothée Waller, S.M.A. was appointed Prefect of Eastern Nigerian in 1912 and since then SMA.s, many of them Irish, were involved in the development of the Church and the  Dioceses now in Nigeria.  Among them are Archdiocese of Kaduna, Zaria and Kafanchan Diocese, the locations of the sad events described in this article from La Croix International.

A Catholic priest was among 45 people kidnapped after Mass on Sunday in Kaduna state where Nigeria’s main Islamic jihadist groups have killed Christians and burnt and destroyed their worship places. This is the third instance of a Catholic priest kidnapped during this month of March in the violence-wracked region.

Assailants on March 27 abducted villagers along with Father Leo Raphael Ozigi, a priest of St. Mary’s Catholic Church in the town of Sarkin Pawa, the Nigeria Catholic Network reported. “The unfortunate incident occurred when the priest was returning to his place of residence in Christ the King Parish, Gwada, after the celebration of the Holy Mass in his parish, St. Mary’s Parish, Sarkin Pawa,” according to the diocesan chancellor. Father Felix Zakari of St. Ann’s Catholic Church, Zango Tama parish in Giwa local government area of Kaduna State was among 50 people kidnapped by bandits on March 25 and when they razed the church.

Bandits also raided other villages in the area where over 50 people were killed and about 100 abducted. The Chancellor of the Diocese of Zaria, Father Patrick Adikwu Odeh, called on Catholics to pray for the safe release of the kidnapped priest who was taken shortly after he left his residence at St Ann’s on his way to the diocesan headquarters. 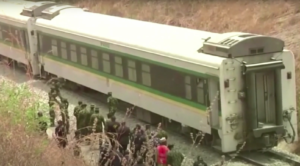 of St. John Catholic Church, Kudenda, Kaduna South local government area, serving in the Archdiocese of Kaduna, northern Nigeria, was abducted by gunmen on March 8. The gunmen invaded the church in large numbers after killing a security guard. The assistant parish priest was able to escape being abducted. In that incident, at least two other people were also kidnapped by the attackers. Additionally, in the last few days, two attacks have been carried out on trains running on the Abuja-Kaduna route. At least eight people were killed in the attack on the evening of March 28. According to Sahara Reporters, 44 villagers were also kidnapped during the attack.

On March 26, a group of some 200 attacked Kaduna International Airport and killed a security guard, preventing flights from taking off. Nigeria has been battling an insecurity challenge since the Boko Haram insurgency began in 2009. At least 536 Nigerians were killed by terrorists in the first three months of 2022. Kaduna state is one of the worst affected. According to a member of the opposition Peoples Democratic Party, more than 10,366 Nigerians were killed by terrorists in 2021 and more than 2,900 kidnappings carried out. The insecurity situation has been further worsened by the clashes between the nomadic herdsmen, predominantly from the Fulani tribe, and the more stable pastoral farming over water and grazing land. Insecurity in Nigeria varies from area to area.

In the north-east, the jihadists from the Islamic State of West Africa Province represent the main threat. In other Northern States and in the so-called Middle Belt, the central zone separating the Muslim-majority North from the Christian-majority South, the presence of bandit groups and clashes between peasants and ranchers are the main risk factors. In the South, separatist tensions and those related to environmental damage from oil production have created a potentially explosive situation. Kaduna state in Nigeria is one of the worst affected by banditry. In January this year Father Joseph Danjuma Shekari was abducted from his parish residence in the Diocese of Kafanchan but was released after one day. Last year bandits killed two people, abducted others and razed a Catholic church in a village in Kaduna State. In a separate incident bandits also shot and killed two Christians in their family home in the state. Media reported that gunmen belonging to kidnapping and cattle-rustling gangs – called bandits by locals – often raid villages in northwest Nigeria. However, Intersociety, the civil rights group International Society for Civil Liberties and Rule of Law, reports that jihadists belonging to Nigeria’s main Islamic Jihadists — Militant Fulani Herdsmen, Boko Haram and its offshoot ISWAP — have killed Christians and burnt and destroyed their worship places. Catholic bishops in Nigeria have criticized the federal government for failing to provide security in parts of the country witnessing ongoing anti-Christian violence.

With permission from La Croix Inernational