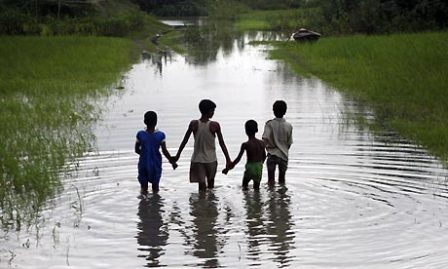 REFLECTION FOR JUNE 2013
Recently it was discovered that, due to human activity, the concentration of carbon dioxide in the earth’s atmosphere was 2% higher than it has been since well before humans lived on earth.  No one knows for sure what the exact long term consequences of this may be however, the UN High Commissioner for Human Rights  has said;  “Climate change poses an immediate and far-reaching threat to people and communities around the world.”   It is certain that the high CO2 level is due to the pollution that we in the developed world cause. We pollute while others pay the price for our modern energy consuming lifestyle.

It is a fact there are now more climate refugees than political refugees worldwide. These now include victims of the recent tornado in Oklahoma.  In spite of their misfortune they will not have to flee to another country as the United States has enough resources to rehouse and care for these citizens. There are many places that do not enjoy this luxury.

It is certain that  in the next few decades changes in sea levels will cover many populated Islands, for example in Papua New Guinea. In addition low lying costal and delta regions in places such as Bangladesh will disappear beneath the sea causing mass migration.  The opposite extreme of soil erosion and desertification in Africa will have similarly devastating effects on the lives and livelihoods of people in Africa.

To a much lesser extreme we, are also suffering from the effects of climate change.  Extended winters are affecting growth – farmers, wonder if they can feed livestock or if they can grow crops due to the shrinking growing seasons experienced during the last few years.  While the bad weather is inconvenient and will cause food prices to increase we will not be forced from our homes and we will not starve – our relative wealth will cushion us.   There are many places that do not enjoy this luxury.

We can help the places that do not enjoy the luxuries that we are beginning to take less for granted.  By deciding to take steps to consume and waste less we can begin to do our bit to lighten our “carbon footprint” , reduce the effects of climate change and also express solidarity those who suffer from its more sever effects.   Already it is too late for many who have been forced to leave their homes and homelands.  We can at least welcome those of them who have come among us and we must, do our part to ensure that its not too late for other vulnerable global citizens, our sisters and brothers.

LORD MAKE US INSTRUMENTS OF YOUR PEACE – WHERE THERE IS DESPAIR LET US BRING HOPE.