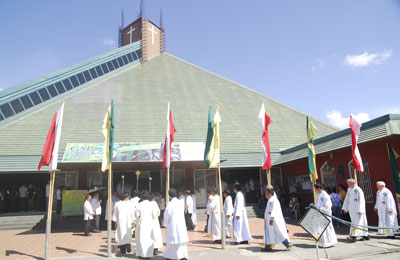 Entry procession for the Jubilee Mass

Fr Gus O’Driscoll SMA (from Rathcormac, Co Cork) is the only Irish SMA on the Asian continent. He may be the last, but by no means the least! Twenty five years ago SMA Fathers John McCormack (Mayo) and Pat Kelly (Belfast) launched the Philippines branch of what was then the SMA Asian Foundation. Since then the SMA in the Philippines has made steady progress and now boasts 11 priests. Filipino SMA priests are on mission in Ghana and Tanzania.

A special and historic day was celebrated on 15 May 2011, at Good Shepherd Parish, in the diocese of Paranaque, Metro Manila, marking the 25th anniversary of the establishment of the parish. It was back in September 1985 that John McCormack and Pat Kelly set foot on Philippine soil to begin a new venture – the presence of the SMA on the continent of Asia. Six months after their arrival, the parish was formally inaugurated by Cardinal Sin; construction of the parish church began the following year and was completed in 1989, together with the parish house.

Left is a picture from 1986: Fr Pat Kelly and the late Cardinal Tomás O’Fiaich, Archbishop of Armagh, who blessed the ground the church is built on. You can already see some of the roof supports on left.

A House of Formation in the northern part of the city was also opened at this time, to be followed a few years later with the opening of the International Spiritual Year Centre, Silang, in 1992.

The parish fiesta activities began on 6 May with the parish novena, and the launching of the photo exhibit and memorabilia, depicting the different milestones of parish life over the 25 year period. John McCormack had arrived back in the parish just in time for this event, together with four travelling companions from Ireland. Michael Flattery also came from South Africa for a two week visit. Throughout the week, various activities of a cultural, musical and pastoral nature were held around the parish. Our picture shows Bishop Mercado preaching at the Mass. To the left are SMA Fathers German Patiga and Alan de Guzman (the SMA Philippines Superior).

Originally part of the Archdiocese of Manila, the parish became part of the diocese of Paranaque on its erection by Pope John Paul II in December 2002. The diocese has more than 1.3 million Catholics with just over 200 priests to care for them in 47 parishes. Our picture above shows Bishop Mercado preaching at the Jubilee Mass with SMA concelebrants seated in the sanctuary.

Fiesta Day itself, Good Shepherd Sunday, began with the formal blessing of the recently constructed Parish Pastoral Center. This was followed by the Eucharist, with Most Rev. Jesse E. Mercado DD, bishop of the diocese, as principal celebrant. Four Irish and six Filipino SMA priests concelebrated, together with some diocesan priests. De Marion Brésillac Hall, on the second floor of the Pastoral Center (left), with seating capacity for approximately 300 people, was the venue for the reception and lunch. A long and joyfilled day came to an end with a fireworks display after the final Mass of the day at 9.00pm.

The Irish Province has made a major contribution both to Good Shepherd Parish and in the growth and development of the Philippines District-in-formation over the years. Eleven members of the Province, some now deceased, have worked here for various lengths of time.

One man, John Flynn, has spanned most of that 25 years; he has been at the center of the pastoral life of the parish for 21 years. As I write these lines, he is on board an aircraft on his way home to Ireland to begin a well-earned retirement. His send-off by the parishioners at the weekend, and again earlier today, was truly memorable and filled with emotion.

It is good to give thanks to the Lord,

to make music to your name, O most high…

Your deeds, O Lord, have made me glad;