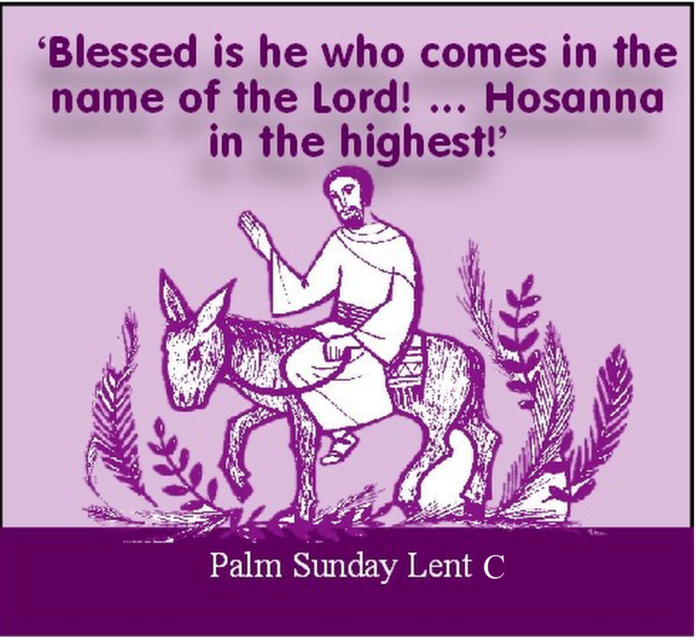 Today, Palm Sunday, is the first day of Holy Week, the high point of the Church’s year, climaxing in the Easter Triduum: Holy Thursday, Good Friday, and the Easter Vigil on Holy Saturday. Two gospels are proclaimed during today’s Eucharist. The first, during the procession with palms, is taken from St Luke and recounts Jesus’ triumphal entry into Jerusalem, riding on a borrowed colt. He is greeted joyfully by the crowds, who spread their garments on the road before him and acclaim him with the words: ‘Blessings on the king who comes in the name of the Lord! Peace in heaven and glory in the highest heavens!’ (Lk 19:38). These are the same crowds who will, a few days later, shout out in unison, ‘Crucify him! Crucify him!’ (Lk 23:21).

During the Liturgy of the Word, the events of Jesus’ passion are proclaimed in full, this year from the Gospel of Luke. We will hear these same events once more on Good Friday, when the passion of Jesus according to the Gospel of John will be proclaimed. Why does the Church give so central a place in its liturgy to the passion and death of Jesus on the Cross? Why do we continue to remember in all their shameful and gory details the humiliation and crucifixion of the one who was Love Incarnate, the one who came on earth only to bring healing, forgiveness and peace? It was surely not because this was the price demanded by the Father for our sins. Only a sadist would demand such a price, and God, far from being a sadist, is Love itself. Nor does Jesus deliberately court his own destruction. He did not seek the Cross, though he did embrace it freely as he discerned that the inevitable outcome of his mission of love would involve being handed over to his enemies and put to death: ‘Now it happened that as the time drew near for him to be taken up, he resolutely turned his face towards Jerusalem’ (Lk 9:51). Jesus’ suffering and death shows us with startling clarity what happens to self-forgetful love in a world ruled by the demons of hatred and violence. Jesus might have avoided the Cross, but only by turning aside from his mission of proclaiming and inaugurating the God’s reign of justice, peace and love. And this he could not, and would not, do. To reveal the full extent of God’s love for us, he had to endure suffering and death. The events we recall today represent the final phase and climax of Jesus’ life-giving mission of love.

In the story of Jesus’ passion and death, presented in exacting detail by all the evangelists, Jesus’ mission moves into a higher key, in which he allows himself to be acted upon rather than to act. For three years, he had acted: reaching out to people, especially the poor and marginalised, proclaiming a message of hope to those longing for liberation, healing the sick, forgiving sinners, and casting out demons. In the first phase of his mission, he was the protagonist. Now, in this final phase of his life, he is the one being acted upon. We see him being betrayed, arrested, imprisoned, interrogated by Caiaphas, Herod and Pilate, scourged, crowned with thorns, mocked, forced to carry a cross, stripped of his garments, and finally nailed and hung on the cross until he expired. This is the supreme moment of his witness to the God of Love. Jesus, suffering and death on the Cross, as the noted Dominican theologian, Herbert McCabe, points out, reveals ‘the weakness of God…, not the weakness of ineffectiveness but the weakness of love, which is our best picture of the power of God. From creation itself right through to redemption the power of God is exercised not in manipulating and interfering with things but in letting them be, because the power of God is the power of love’. It is, however, only through the lens of the resurrection that we come to see the weakness of divine love in our world not as a tragic defeat but as a glorious victory.

As we prayerfully recall the memory of Jesus’ passion and death, we profess our gratitude for the love that allowed Jesus to be ‘led like an innocent lamb to the slaughter’. We express our solidarity with all the victims of violence in our world today: the people of Yemen, Ethiopia, Iraq, Syria, Afghanistan, Democratic Republic of Congo, Northern Nigeria, and especially the people of Ukraine. Let us pray that, like Jesus, we may be active witnesses to his transforming love in our violent world.

I will end with an apt reflection from the pen of Fr Flor McCarthy SDB:

‘On the cross Jesus endured insults and mockery.
Yet his heart remained open even to his enemies.
He absorbed all the violence, transformed it,
and returned it as love and forgiveness.
One’s pain can so easily turn to rage,
so that one wants only to lash out blindly
at whoever happens to be within range.
From the depths of his own pain,
Jesus reached out to comfort the thief.
Some people are like sugar cane:
even when crushed in the mill, what they yield is sweetness.
Jesus stretches our capacity for compassion.
He challenges our idea of love.
The pity is that it often goes unused.
By our love people will know that we
are followers of Christ the King.’