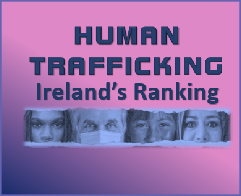 Today we bring you the third in a series of six videos based on the Annual Trafficking in Persons Report (TIP) published by the US State Department in June 2021. Globally recognised as the most authoritative information on human trafficking it ranks each country based on their anti-trafficking efforts.

Today’s video, reflecting the findings of the TIP Repot, shows how the response of the Irish Government to Human Trafficking fell short of expected standards resulting in Ireland, for the second year in succession, being ranked on the “Tier 2 Watch List” (Countries meeting minimum standards are ranked Tier 1 while those not making any efforts to meet minimum standards are ranked Tier 3).

Videos yet to be published

For ease of access the previous two videos in the series are also available below.