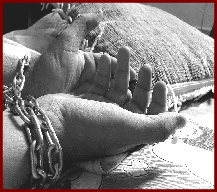 “Every human being, man, woman, boy and girl, is made in God’s image. Therefore, modern slavery, in terms of human trafficking, forced labour and prostitution, and organ trafficking, is a crime against humanity.”
Pope Francis Dec 2014

Human trafficking is modern day slavery. It causes unimaginable misery and suffering to those who are dehumanized, become commodities that are bought, sold, abused.  The human dignity we take as a birthright, which is central to Catholic Social Teaching and enshrined in the Universal Declaration of Human Rights is denied to millions of people.  More people are currently victims of human trafficking and slavery than at any time in history. The International Labour Organisation (ILO) estimates that 40.3 million people globally are living in slavery.

The presence of victims of human trafficking has been documented in over 160 of the world’s 197 countries, including Ireland.  Human trafficking is driven by greed and the huge profits it generates.  It is maintained by an insatiable demand for cheap labour, sexual services and cheap goods.  It is sustained by by people who turn a blind eye, by those willing tp pay for the services of trafficked people and by those willing deny other human beings their God given dignity.

The 2018 Global Slavery Index tells us that modern slavery is a hidden crime that crosses borders, sectors and jurisdictions. It is found in industries including garment manufacturing, mining, agriculture, prostitution and in many contexts such as private homes, factories, fishing boats, restaurants, farms, car washes and nail-bars.

Many richer countries view modern slavery as a problem that happens elsewhere. They deny all responsibility. However, in these countries, even those with strong anti-slavery laws and structures, human trafficking is present.  One of the most important findings of the 2018 Global Slavery Index is that the prevalence of modern slavery in high GDP countries (e.g. US, Canada, UK, France, Germany, Netherlands and other European countries) is higher than previously understood.

The Report identifies critical gaps in protections for groups such as irregular migrants, the homeless, workers in the shadow economy and certain minorities. These gaps are being exploited by criminals. The report also makes clear that in every country, there are enormous differences between the estimated size of modern slavery and the small number of victims that are identified.

Just as important is the fact that high GDP countries can be linked to slavery and human trafficking which happens far from their shores.  This can be the direct result of policy decisions allowing the importation goods produced by victims of trafficking. The link may also be indirect, i.e. resulting from a blind-eye being turned to practices that facilitate and profit from the sale of goods made through the forced labour of slaves. These are everyday products in common use such as computers, mobile phones, clothing, fish, cocoa and timber. As long as developed countries continue to allow the importation and sale of the products of slave labour they fuel and perpetuate the demand for the slaves needed to produce them or to mine the raw materials needed to make them in places like Asia and Africa. In this way richer countries contribute to the conditions that allow slavery to prosper.

All governments have committed to achieving the UN’s Sustainable Development Goals by 2030.  One of them, Goal 8.7, is to eradicate Slavery. To achieve this then wealthy countries cannot continue doing more of the same – there is an urgent need to prioritise prevention, through a focus on discrimination, safe migration support for victims and the prosecution of traffickers.  Rich countries, including Ireland, also have an obligation to take serious steps to address the slave labour products they import.  They owe this obligation both to consumers in their own countries but more especially to victims along the supply chain, where products are made, packed and shipped.

On an individual and everyday level modern slavery touches us all of us, through the food we consume, the clothes we buy and other goods we purchase. We all have a responsibility to address and eliminate this crime everywhere it occurs and in every way that we can. The choices we make matter, the goods we buy may cost much more than the money we pay in terms of human suffering and the lifelong bondage of people in countries far away.

The next article in this series looks at human trafficking in Ireland.  This will be published on February 5th.