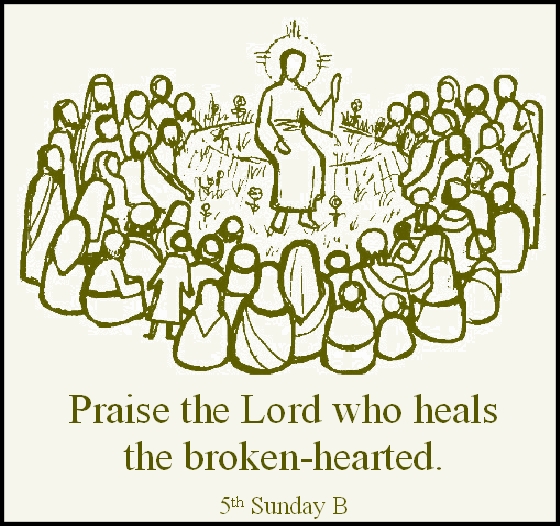 Praise the Lord who heals the broken-hearted

The readings of today’s Mass touch on one of the great mysteries of life, human suffering, especially the suffering of the innocent. The first reading taken from the book of Job was written 500 years before the birth of Christ. It presents us with the situation of a just and upright man who suffers a terrible string of calamities. Having lost everything and everyone dearest to him, he is left to bemoan his sad plight in words that may at times find an echo in our own hearts: ‘Is not our life on earth no better than hired service, our time no better than hired drudgery’ (Job 7:1). Job’s anguish is heightened rather than relieved by ‘friends’ who come to comfort him. Believing that Job’s sufferings are a punishment from God for some wrong he or his family has done, they try to convince him to repent and throw himself on the mercy of the Almighty. But Job continues to profess his innocence. And God does indeed vindicate his claim to be innocent of any wrongdoing.

While rejecting the view – commonly held view of the time and still aired in some Christian circles – that human suffering is a punishment from God, the Book of Job doesn’t give an answer as to why innocent people suffer. It suggests rather that no rational answer is to be found, at least this side of the grave. This was a lesson the great Christian apologist, C S Lewis, came to learn late in life, following the untimely death from cancer of his wife, Joy. His book, A Grief Observed, gives a vivid description of his own reaction to his wife’s death. Confronted with the suffering of a devastatingly personal kind, his rational faith fell to pieces. At one point he gives vent to his inner rage: ‘Where is God? Go to him when your need is desperate, when all other help is vain, and what do you find? A door slammed in your face and a sound of bolting and double-bolting on the inside. After that silence.’ And yet Lewis never abandoned his faith in a just and loving God. He believed his undying love for his wife would endure and be fulfilled in the eternity of God.

Job also, even at the very nadir of his personal torment, continues to trust in God as his Defender: ‘For I know that I have a living Defender and that he will rise up last from the dust of the earth. After my awakening, he will set me close to him, and from my flesh I shall look on God’ (Job 19:25 – 26). Job’s and Lewis’ witness to hope in the midst of personal loss and suffering stands in stark contrast to the sentiments of hopelessness and despair uttered by the blind Gloucester in Shakespeare’s King Lear: ‘As flies to wanton boys are we to the gods they kill us for their sport’ (Act 4, scene 1). Here there is no hope of any justice in life. We are simply the playthings of vicious inscrutable gods, who reward cruelty and delight in suffering.

While it is true that there are times when suffering can be unbearable, we are not left to bear it alone. The responsorial psalm today exhorts us to ‘praise the Lord who heals the brokenhearted and binds up all their wounds’. God’s response to human suffering is to be found in Jesus Christ, though not so much in his words as in his actions and in his life. As today’s gospel clearly shows, Jesus went out of his way to heal all kinds of suffering, physical and mental. He was the lived embodiment of the divine response to human suffering, sowing seeds of hope where there he found despair, restoring broken relationships, and drawing life from the teeth of death.

Jesus came on earth to bring people into the life-giving stream of God’s love: ‘I have come that you may have life and have it to the full’ (John 10:10). At the very heart of his ministry was a concern for the integral well-being of human beings, created in the image of a God who is Love. From the life of Jesus, it is clear that God wants us to be healed, to be fully alive and well at all levels of our being: spiritual, psychological, and physical as well as social and political. However, Jesus did not eliminate all suffering. What he did, finally, was to enter the depths of human suffering himself. Jesus’ identification with suffering humanity reached its climax on the Cross, where he utters that heart-rending cry of desolation to his father: ‘My God, my God, why have you forsaken me?’ (Mt 27:46). And his Father did not forsake him but brought him through the portals of death to the fullness of resurrected life.

The God revealed in the life and death of Jesus is not a heartless tyrant, indifferent to our sufferings, but a God who assumes our weakness and pain and transforms it through the power of love. By his resurrection, Jesus shows that God’s suffering love is ultimately victorious. As disciples of Jesus, we are called to imitate his example, and even in the midst of our own doubts, fears, and sufferings, to reach out to others with loving care and sow seeds of hope, believing, as Pope Francis puts it, ‘that in the midst of darkness something new always springs to life and sooner or later produces fruit’ (Evangelium Gaudium 276).