Home News “Fratelli tutti,” the dreams of solidarity from a pope concerned about the... 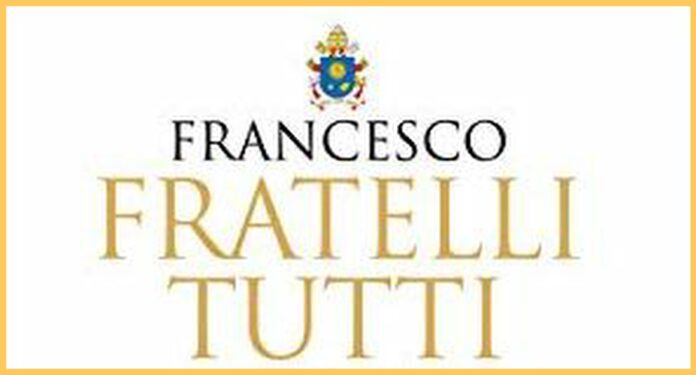 On the 5th of October, La Croix International published the article below on the new Papal Encyclical signed by Pope Francis in Assisi on Sunday 4th of October 2020.

In new social encyclical Francis expands on themes he’s been developing throughout his pontificate, all built on the same cornerstone: fraternity.

Pope Francis has long praised the word “fraternity”, a concept that can sometimes seem completely exhausted when it is not actually being mocked. What can be done to make sure it does not remain an empty word?

The pope seeks to answer this in the pages of Fratelli tutti, a new “social encyclical” that focuses on “fraternity and social friendship”.  The text was published this past Sunday, the Feast of St. Francis of Assisi. The pope had gone to his namesake’s hometown a day earlier there to celebrate Mass at the saint’s tomb and then sign the new document.  This is more than just a programmatic encyclical. Throughout the lengthy text (it runs to more than 41,000 words), Francis develops themes he touched on five years ago in Laudato si’, an encyclical on matters linked to ecology.  The former Archbishop of Buenos Aires says Fratelli tutti is meant to be a “modest contribution to continued reflection” on the state of the world. But it is much more than that.

Francis begins by setting the context, describing the broad state of the world that is striking in its darkness.  The encyclical describes a “closed world” filled with “dark clouds” that are quite disturbing. And its diagnosis is sometimes harsh. After several decades of pacification in many parts of the world, including Latin America and Europe, “our own days, however, seem to be showing signs of a certain regression”, the pope worries.  The resurgence of conflicts, resentment, divisions among peoples, the resurgence of “unhealthy ‘populism'” and nationalism, generational ruptures, inequality between women and men, consumerist fever, verbal violence on social networks, indifference towards the weakest, etc. — are all signs that the Bishop of Rome underlines.

This is not even to mention the COVID-19 pandemic, which broke out after the pope had already begun writing the new encyclical. The coronavirus emergency seems to have only confirmed Francis’ intuitions on the urgency of solidarity.  Throughout this text, the pope actually evoked concepts he’s been hammering home since the beginning of the pontificate, such as the “throwaway culture” and the conviction that the world is going through what he calls a “‘third world war’ fought piecemeal,” which emerged in his speeches as early as 2015.  Francis does not spare some Christians, whom he reproaches for adding to the world’s misery, for example by considering migrants as unworthy of being welcomed.  “For Christians, this way of thinking and acting is unacceptable, since it sets certain political preferences above deep convictions of our faith,” he writes.

“Fraternity necessarily calls for something greater, which in turn enhances freedom and equality”

But this observation on the state of the world should not make us lose hope, insists the pope. Rather, he repeatedly calls us to “dream” of universal fraternity. It is in the name of this fraternity that Jesus “challenges us to put aside all differences and, in the face of suffering, to draw near to others”.  In fact, throughout his encyclical, Francis describes the different dimensions of fraternity, a key concept of his pontificate. “Fraternity necessarily calls for something greater, which in turn enhances freedom and equality,” he says.

He associates fraternity with what he calls “social friendship,” a concept he forged in the early 2000s when he was still archbishop of Buenos Aires.  “Genuine social friendship within a society makes true universal openness possible,” the pope writes in Fratelli tutti.

And he insists that fraternity has primarily economic implications.  Francis thus reminds us of the existence of the principle of the universal destination of goods, central to the social doctrine of the Church, and which even supplants the right to private property.  “Private property can only be considered a secondary natural right,” he explains.  He also stresses “limits” of the liberal vision of an economic system which he calls to change.  “In some closed and monochrome economic approaches, for example, there seems to be no place for popular movements that unite the unemployed, temporary and informal workers and many others who do not easily find a place in existing structures,” the pope writes.

He says another variation of fraternity is found in welcoming migrants.  “Ideally, unnecessary migration ought to be avoided; this entails creating in countries of origin the conditions needed for a dignified life and integral development,” the pope concedes. But when this is not possible, he says it is necessary to “welcome, protect, promote and integrate” people.  Francis suggests some very concrete ways for doing this, such as improving the granting of visas, opening humanitarian corridors for refugees, guaranteeing the right to always have identity documents or to open a bank account.

Throughout the encyclical, he expresses his attachment to a “universal fraternity” which cannot remain without consequences. However, the universality of which he speaks here is not the same as that promoted by a triumphant globalization, which, like a steamroller, would crush all differences, by what Francis calls “the new forms of cultural colonization”. As developed by the pope, “universality does not necessarily water down their distinct features”.

Francis is convinced that fraternity cannot be limited to a set of objectives to be achieved. He sees it more broadly as a method that has a direct consequence on our way of being in the world, and in particular on our commitment to “persistent and courageous dialogue”.  He insists that dialogue must prevail in all situations, including in the public arena, when two sides are negotiating peace.

Francis devotes a long passage to the themes of peace and reconciliation. And condemns all those who make claims for the notion of a “just war”.  “It is very difficult nowadays to invoke the rational criteria elaborated in earlier centuries to speak of the possibility of a ‘just war’,” the 83-year-old pope says.  To these flawed justifications, he prefers to take up the appeal Paul VI launched in 1965 before the United Nations: “Never again war!”

When Francis speaks of dialogue he obviously includes the interreligious type. This also runs throughout the entire encyclical, which he signed in Assisi, the birthplace of St. Francis and the international center of interreligious dialogue.  “We believers are challenged to return to our sources, in order to concentrate on what is essential: worship of God and love for our neighbor,” the pope writes.  While in Laudato si’he was more interested in a common reflection with the Ecumencial Patriarch Bartholomew, this time the pope takes a further step and mentions four times the Grand Imam of Al Azhar, Ahmed El-Tayeb.  The two men signed a historic declaration on human fraternity last year in Abu Dhabi “for world peace and living together”.

Their call for peace, justice and fraternity is fully taken up in the new encyclical. And a forum bringing together young people from around the world will soon be held in Rome and at Al-Azhar University to study this encyclical.