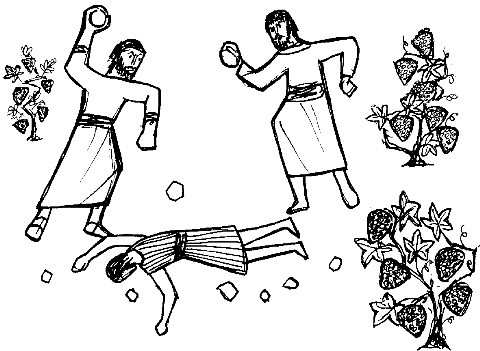 A certain couple had 5 children, 4 of whom were generally pleasing to their parents but one of the boys, now 25, had caused problems down the years. He stole money and was imprisoned twice. He was on drugs and had 3 children with different women. His actions caused great suffering and embarrassment to the family. The relatives and friends encouraged the parents to disown their son. They were frustrated by his reply to this: ‘how can we, he is our son and we love him. Maybe with the passing of time he will change his ways’.

Today’s readings are asking us how we are responding to God’s call. Are we good workers in his vineyard etc.? The Gospel today poses this question. In such parables Jesus is trying to tell us something about who God is and his unconditional love for us.

The owner had prepared everything for the tenant farmers, he has planted the vineyard, put a hedge around it and erected a tower – a symbol of what God does for us in his loving care for us. Are we grateful enough for all that we have received from God.

Next, the vineyard owner, sends his servants to obtain his share of the grapes. We see the terrible response of the tenants. The owner sends more servants, thereby indicating that – despite what they’d done to the first group – he has forgiven the tenants their awful crime. Sadly, the same thing happens. Then, he decides to send his son, thinking that surely the tenants will respect the son. We wonder if the vineyard owner is totally naïve or crazy to risk this after what had previously been done to his servants whom he sent.

Jesus is saying that this is the way God acts towards all of us.

In the Old Testament God sent prophet after prophet and many were persecuted or killed. Finally God in his incredible love for us sends his Son and we know the end result. One wonders is God totally naïve or stupid or what. No wonder St. Paul speaks of ‘the foolish love of God’. The answer of course is that this is God’s nature: ‘God is love’ according to 1 John 4.8. He is not a vindictive God or a punishing God but trying in so many different ways to show how much he loves and cares for us.

The last part of the parable is a question to the listeners and we see their reply: punish them.

What is the parable saying to me personally about who God is? What is my response?

Taken from a homily of the late Fr. Jim Kirstein, SMA