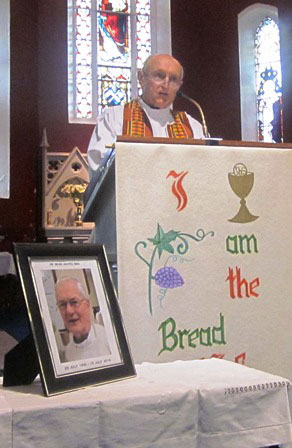 Fr Seán Hayes requested that one of his classmates, Fr John Horgan, should preach at his funeral Mass. Drawing on Isaiah 25:6-9, Romans 5:5-11 and John 17:24-26, Fr Horgan (pictured) preached the following homily.

His ordination was followed by his departure to take up mission in the Archdiocese of Kaduna, Nigeria. That was the realisation of his dream. At the time the very word missionary instilled notions of adventure, heroism and sacrifice and these ideas were all the stronger because the missionary realised he was not engaged in ordinary work but in a personal call or vocation from God.

Armed with these high ideals Fr Sean was like a racehorse ‘chomping at the bit’ waiting for the race to begin after his initial period of learning the language and culture of the people. Like all missionaries at the beginning of their career I am sure Sean gave little thought to possible misunderstandings, failure, discouragement, sickness or misfortune. All of these become part of the missionaries lived experience later. When such experiences are internalised they give the missionary a true picture of what it means to be on mission, to do mission and to be a missionary.

One of the fruits of the second Vatican council 50 years ago was that the mass and the liturgy of the sacraments could be celebrated in the local language all over the world. Fr Sean saw this as opening up great possibilities for mission among the local people because they could pray and be formed in Christian living through the medium of their local culture and language.

It also offered the opportunity for his missionary apostolate for the promotion, education and empowerment of local women and girls.

For part of his missionary career he worked in Niger Province in the Archdiocese of Kaduna. This Province was handed over to the Kiltegan Fathers who came to work there in March 1963 where Sean was the last SMA who handed over to them on 6th September of that year.

Where there was one diocese in the area to which he was appointed in 1958, there are now six dioceses. The Lord certainly gave a plentiful harvest to the seed sown!

He became increasingly aware that the church in Kaduna was paying too little attention to the evangelisation of the local peoples because it depended for its support on the non-native Christian population who lived and worked there.

He developed a friendship and close working relationship with the late Fr. Malachy Gately who was deeply interested in the evangelisation of the Magazawa people of Kano State, Nigeria. Though many considered this to be a Muslim area Fr Gately knew that these people had resisted conversion to Islam and that there was great opportunities for the evangelisation of these people. Fr. Gately worked through catechists while Fr Sean had a different approach to the work and became the first Catholic priest to live among the Magazawa people and was directly responsible for opening the first two parishes there. He also had a healthy pride that priests from that area were ordained to ministry in Northern Nigeria.

I would regard himself and Fr Malachy Gately as the founders of the indigenous church in that area.

Fr Sean left Nigeria in 1987 with a great sense of fulfilment at what God had done through him and I suppose a certain frustration that he was not able to go further. But ….. he felt the time had come when he should try new mission territory.

He visited all the countries where the SMA was involved in East and Southern Africa. But in each country Sean saw that fluency in the local language was essential. So he decided as he could not become fluent in a new language now being in his early 50’s he opted to go to Liberia. Because of the civil war in Liberia, the main work of missionaries at the time was the distribution of AID to a needy population. Sean felt uncomfortable in this role. So after some years he returned to Ireland and accepted the position of Director of the Family Vocations Crusade (FVC) in Leinster and afterwards in Dublin.

He did not confine himself to the traditional way of FVC groups but constantly sought new ways of soliciting support for the formation of SMA seminarians in the new units of Poland, India, the Philippines and particularly in Africa which was always dearest to his heart.

As well as his work with the FVC he gave sterling service to all who needed contact with the Nigerian Embassy in Dublin.

Through his love of art and the game of bridge, not only did he find an outlet socially, but he used these areas of interests as a means of living out his missionary zeal and promoting the Gospel.

People speak to me of Sean as a man who was very obliging and very hospitable to people. He would never see you stuck. He was generous to the core but didn’t want others to acknowledge this about him as he possibly saw this as a sign of weakness.

He was strong physically and mentally and was able to live among the people in their local villages and feel very much at home among them. Wherever he lived out his missionary calling he was singled-minded – 100% committed to the people…….!

For medical reasons, Sean officially retired to the SMA House in Blackrock Road here in Cork after 54 active years in the service of the SMA – 33 years in Africa and 21 years as FVC Director.

He was a man who persevered to the end.

Sean’s work of evangelisation, his administration of the sacraments and praying with his favourite passages of scripture gave him strength and a framework for his life. In his latter years he also developed a strong devotion to the Holy Spirit. This is reflected in one of his last paintings which sat on his bedside locker in Marymount Hospice which he dedicated to the Holy Spirit.

He was also a man of pilgrimage. He was the essential pilgrim always searching and finding God in work and in the sacred place of his own self. His final year was a year of pilgrimage, letting go, renewing, and communicating with a more authentic Sean.

We hope Fr Sean is now enjoying the celebratory feast foretold by Isaiah in the first reading of today’s mass and having died with Christ we hope he has already shared his resurrection with Christ as promised in the second reading.