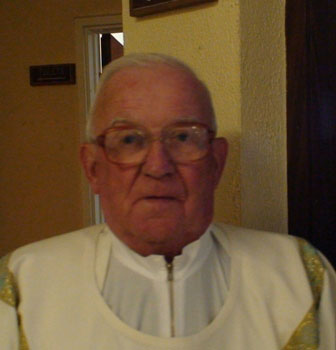 The Society of African Missions mourn the death, at the Galway Clinic, of Fr Patrick Whelan SMA, a few weeks short of his 80th birthday. Fr Paddy died in the presence of his family and SMA confreres who had been keeping vigil with him for the last couple of days. A keen ornithologist it was fitting that his death occurred just as the birds began to sing outside his room window, at 6.50am on Friday, 10 February 2012.

The son of Patrick and Annie Whelan (née Walshe), he was born no 23 March 1932 in Sylane, Belclare (Corofin parish), Co Galway. He is survived by two sisters, Sr Martina (Mercy Convent, Galway) and Sr Dolores (Presentation Convent, Thurles). He was predeceased by his brothers Tommie and John.

Paddy attended the local primary school. His secondary schooling was completed at the (SMA) Sacred Heart College, Ballinafad, Belcarra, Co Mayo where his interest in all types of sport was nurtured.

Feeling a call to missionary priesthood, he joined the SMA and became a member of the Society on 2 July 1953. After completing his studies at the African Missions Major seminary in Dromantine, Newry, Co Down he was ordained to the priesthood in St Colman’s Cathedral, Newry on 18 December 1956 by Bishop Eugene O’Doherty. Paddy had fourteen classmates, six of whom survive him.

Recognized for his academic ability, Paddy did not go immediately to Africa but was sent to undertake a Science degree at University College, Cork, residing at the SMA House in Wilton. It is in the community cemetery at Wilton that he will be buried. During his years in Cork (1957-1960) Paddy was a member of the Sigerson team, playing at centrefield and also in the forwards. Though never winning a Sigerson medal he did get a medal with his local Corofin team (1959) when they won the Junior County Final.

His interests were wide-ranging, including fishing, Gaelic football, a keen golfer who could replay in tremendous detail every stroke if asked ‘how was the golf today Paddy?’. He was also an avid stamp collector and he fed the birds around the SMA Claregalway House right up to last week when he was admitted to hospital.

After gaining a BSc in 1960, Fr Paddy was appointed to the diocese of Ondo, Nigeria where he taught Science in Aquinas College, Akure. From 1966 – 1968 he was recalled to Ireland to serve as Director of his former school, Ballinafad College.

He returned to serve again in Ondo (1968 – 1997), serving for a time as Rector of the Sacred Heart Minor seminary, Akure and later on the staff of Stella Maris College, Okitipupa. He also served in St Matthew’s Parish, Ondo. His final pastoral assignment in Ondo diocese was as Parish Priest of Ore. In 1997 Fr Paddy lived at the SMA House in Ibadan while serving as Parish Priest of St Leo’s Parish, Challenge. He returned finally to Ireland in 2000 and served as Bursar at the SMA House, Claregalway until his death.

His remains are reposing at the SMA House, Claregalway on Saturday, 11 February, from 4pm to 7pm.

On Sunday morning his remains were brought to the Sacred Heart Church, Belclare for Mass at 1pm. Afterwards Fr Paddy will take his final journey to St Joseph’s SMA Parish Church, Wilton, Cork (opposite the Cork University Hospital) arriving at 7.30pm.

The William Butler Yeats poem, The Lake Isle of Innisfree was a favourite piece of Fr Paddy. After Communion, one of his grand-nieces, Aisling, recited this poem while a second grand-niece, Eve, played the violin. It was a beautiful moment of reflection, appreciated by all.

Following the Mass and Prayers of Commendation, Fr Paddy’s remains were shouldered to the adjoining cemetery by his nephews and grand-nephews. In a touching reminder of his love for his native county, they also brought some soil from Belclare to go in his grave. At the conclusion of the funeral, all were invited to lunch in the community dining room where many stories were swapped about Paddy. No doubt he’d have enjoyed talking about it all to anyone who was listening!