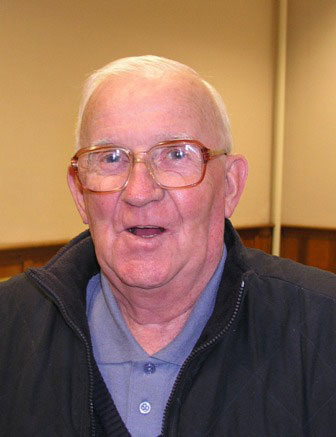 Fr Paddy Whelan’s final journey began in his home parish of the Sacred Heart in Belclare, Corofin, Co Galway. The Principal Celebrant of the Mass on Sunday, 12 February was Fr Paddy’s classmate, Fr Vincent Lawless SMA. Though it was a Sunday, many local clergy as well as SMA’s from around Connacht attended the Mass. They included Very Revv Paddy Mullins (PP Corofin), Ian O’Neill (PP Claregalway) and Martin Gleeson (AP Corofin). The readings of our mass were those of this Sunday, mostly on cleansing from leprosy, are not ones any of us would be used to hearing at funeral masses. Yet they do supply us with a spiritual thought as we reflect on Fr. Paddy’s life and the mystery we celebrate – the passing over through death from this life to the next.

Leprosy was common enough in Nigeria especially in Fr. Paddy’s early years as a missionary there. In Jesus’s day it was really a dreaded disease. The leper was effectively an outcast – the person was debarred from all social contact and forced to withdraw from all normal interaction with people. What Jesus did for the Leper in the gospel, what he did in all his healing miracles, in all his forgiveness of people who had strayed and sinned was to bring them all back into the community as people with dignity and the equal of others.

Jesus’ whole mission was to create a family of God that would be marked by inclusivity, irrespective of background, nationality or colour; saint or sinner One could say that it is this very same mission of creating a family of God that every missionary, indeed every baptised person, is called to bring about. Fr. Paddy, through his ministry and the witness of his life, added to this family of God not only in numbers but also in quality of life, both in Nigeria and here in Ireland. This family of God here on earth in natural progression becomes the family of God in heaven – as day by day members go through the gateway of death. It is our confident prayer today in this mass that Fr. Paddy is as proud a member of the heavenly host as he was of the human race during his almost 80 years of earthly life.

Let us try to encapsulate those 80 years by way of a tribute.

The youngest in a family of five, he did his primary schooling in Sylane. His secondary education was done in the SMA colleges of Ballinafad, Castlebar and Wilton Cork. On discerning that God was calling him to the missionary vocation in the SMA he then did his spiritual year and philosophy studies to be followed by his Theology formation in our then SMA Seminary of Dromantine in Newry, Co Down. He was ordained on 18 December 1956 in Newry Cathedral. As a young priest he was sent to Cork to do a Science Degree in U.C.C. On graduating his first missionary experience was in the Diocese of Ondo in Western Nigeria. 1960 – 66. Next he was asked to be Director of students in Ballinafad Secondary School :1966 – 68. He then returned to Nigeria and apart for a year’s Sabbatical he was to serve for a further 33 years, nearly all in Ondo Diocese again, and nearly all in the teaching ministry. There are many Nigerians today I am quite sure that are so grateful to Paddy for what they received from him. He was a born teacher and I would think that the main reasons why he was admired as a teacher in Nigeria and in Ballinafad by his past pupils would be that he was fair, respected the individuality and dignity of every student and that he was genuinely very interested in youth and in giving them a well rounded education for life.

For health reasons, Paddy returned to Ireland in 2000 and was assigned as Bursar to our SMA House in Claregalway. It had opened 6 years previously, as the new centre for the SMA in the West. His main function as Bursar was in keeping our financial books, which he did right up January of this year.

It was Fr. Paddy’s rock solid faith, fidelity to prayer and devotion to Our Lady, which imbued and sustained Paddy’s passion for life and for mission. He had a similar passion and interest when it came to sport – the other great love of his life. He was a fine footballer himself. One of his colleagues last evening said “he had a great engine”. He was a proud holder of a Junior Club County medal which he won with Corofin in 1959. While in UCC he played on the College team in the Sigerson Cup and those games were among the highlights of his football career. After his playing days, he was a keen follower of practically every sport – by attending as many matches as he could and viewing sport on TV.

During his holidays from Nigeria Paddy could often be seen fishing in Loch Cara and Loch Measc and many such places. Many a fellow missionary was regaled with stories of not only the ones that got away but also of the fish that he successfully netted. In more recent years Paddy took to golf – a game that was made for him. There was not a rule in the Golf Book that Paddy did not know. Because of his many gifts, had Paddy not pursued the priesthood, there would be many professions that he could have taken up with distinction. A Golf Referee would certainly be one of them. He would have no difficulty whatsoever in calling to order even Tiger Woods if he took any liberties with the rules.

Paddy, especially because of his frail health, was not much into socialising. But the one social outing that he really enjoyed right up last October was the Tuesday golf outing in Tuam gold club as a member of “The goats”. Lest the uninformed think that I am speaking in a derogatory fashion, this is a self styled name for the Group of people who are retired from active work and who play the game of golf in Tuam. Members of Tuam golf club – thanks for your friendship with Paddy.

Paddy had so many other interests and abilities and characteristics. I will mention just a few: he was a stamp collector right to the end and he has amassed many fine albums. His sense of place characterised him; of his beloved Sylane, sense of Parish and County; his Irishness – no one wore the shamrock on St. Patrick’s Day more proudly than Paddy did. He was able to transfer this quality of “rootedness” to Africa and with African peoples. He loved English literature and poetry – he could quote extensively especially from his favourite “The lake Isle of Inisfree”. And one cannot leave out his story telling – with no details omitted. I could choose from a number of stories to illustrate this. This one came to mind because on Friday night I had a phone call all the way from Kaduna Diocese in Nigeria from Paddy’s good friend, Fr. Johnny Haverty, who hails from Craughwell. Some 10 years ago Paddy was driving from Claregalway to Dublin and Johnny home on holidays availed of a lift to Dublin. I met Johnny afterwards and he said I made one fatal mistake. I asked Paddy when I got into the car what I thought was a simple and straight forward question: “When did you stop smoking Paddy”. Paddy began to answer by telling Johnny when his grandfather took up smoking and went on from there and when they got to Dublin Paddy had still not come to the answer to Johnny’s simple question – and there was no motorway between Galway and Dublin then!! Paddy just did not believe in bottom line answers to any question.

I asked myself what one quality or phrase would encapsulate Fr. Paddy, the person and the priest. For me I think it would be contained in title of the last book Paddy read and thoroughly enjoyed, written by a Tuam man Noel O Donoghue about the foundation of GAA clubs in North Galway in the 1880’s and 1890’s and how the whole split in the Parnell Home Rule movement affected the growth of the GAA and also the Church. The title of the book is “Proud and Upright men”. Paddy was a proud man in the very best sense of that word and he was certainly upright – meaning honourable, principled and noble. He has left us all a host of memories that will be spoken about for many days and years to come.

Paddy was just one week in hospital before he died. On receiving a call from the Galway clinic some members of his family and myself kept vigil with Fr. Paddy during the early hours of Friday morning. We thought that every breath would be his last. When this was not turning out to be the case, I think it was his niece Moireen who said “I bet you he will wait until the dawn and the birds begin to sing”. And without any exaggeration when he did draw his last breath at 6.50am we could hear the birds singing outside the window. Paddy’s love of birds and nature would qualify him to be a modern day St. Francis. I like to think now a few days later that the singing of the choir of birds was the cue for the heavenly choir to get on their marks to sing a chorus of welcome to a true and loyal servant of Jesus Christ.

After the Mass, surviving members of the 1959 Corofin Junior Championhip Team formed a Guard of Honour and accompanied the hearse through the village. Also in attendance, as they were on Saturday evening in SMA Claregalway, were the ‘Goats’ – a group Fr Paddy’s golf friends who gathered every Tuesday for Golf in Tuam. It was the one social event he would never miss. Their participation in hte funeral was greatly appreciated by Fr Paddy’s family and his SMA family.

Fr Paddy was then brought to St Joseph’s SMA Church, Wilton, Cork arriving at 7.30pm where it was received by his SMA confreres and family and friends.