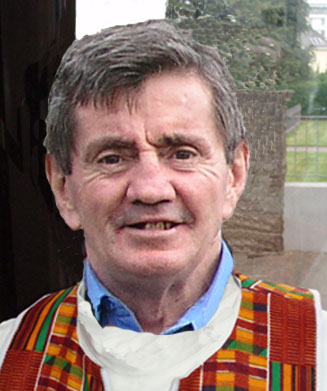 Fr James (Jimmy) O’Connell SMA passed away peacefully in his sleep at 1.10 a.m. on the morning of Tuesday 4 August 2009 at St Theresa’s Nursing Unit attached to SMA House, Blackrock Road, Cork.  He had been in very poor health for some time but his death was unexpected.  He was aged 72 years.  RIP.

Jimmy was born 23 March 1937.  He came from a family of seven, five sons and two daughters, of the late Seán and Helena (nee Sandross) O’Connell.  A native of Dublin, he lived at “Béal na mBláth”, Vernon Avenue, Clontarf.  He received his early education at Clontarf National School.  He then attended O’Connell Schools run by the Christian Brothers for his secondary education which he completed in 1955.  While there his prowess as a sportsman emerged and he played in goal for the school and also played minor hurling for Dublin.  In 1955 he decided to become a missionary priest and entered the then novitiate of the SMA at Cloughballymore, Kilcolgan, Co Galway.  On 24 June 1956 he took his First Oath of membership of the Society of African Missions.  Next he was assigned to SMA House, Wilton, Cork to continue his education at UCC where he graduated with a BA in 1959.  His theological studies were undertaken at the SMA Major Seminary, Dromantine, Newry, Co Down from 1959 to 1963.  He became a permanent member of the Society on 12 June 1962.  He was ordained to the priesthood at St Colman’s Cathedral, Newry, Co Down on 21 December 1962.

Following the completion of his studies, Jimmy was appointed to Nigeria to work in the Archdiocese of Lagos where he was to remain on missionary assignments until 1991.  He spent many of these years in education as a teacher and chaplain in St Finbarr’s College, Akoka and Nazareth College, Ibonwon but it was at St Gregory’s College, Lagos that he was most renowned.  Ever the sportsman, he was involved in promoting and coaching the college’s cricket, football and athletics teams. A talented singer, under his direction the students presented major musical productions like Jesus Christ, Superstar and the framous South African musical Ipi Tombi.  He was appointed Deputy Society Superior of the SMA in the Archdiocese 1987-1989.  When he retired from teaching he undertook pastoral work most notably in Ajilete.  His fluency in the local language, Yoruba, was a great help in this work.

From 1991 to 1997 he was assigned to SMA House, Maynooth as Director of the formation programme for the students preparing for SMA missionary priesthood.  It was then that his growing health problem began to manifest itself.  He was diagnosed with Parkinson’s disease.  He was forced to move to SMA House, Blackrock Road, Cork in 1997.  His deteriorating condition continued and he moved into St Theresa’s Nursing Unit where he was provided the necessary nursing care for his condition.  He was there until his passing.

Fr Jimmy’s remains, after reposing at the Chapel in SMA House, Blackrock Road, were removed to the St Joseph’s SMA Parish Church, Wilton, Cork on Wednesday 5 August, and they were received by the local SMA Leader, Fr Dan Cashman.  The concelebrated funeral Mass took place on Thursday 6 August at 12 noon and was followed by interment in the adjoining SMA Community Cemetery.  Fr John Dunne SMA, Vice-Provincial, was the main concelebrant and he was joined at the altar by Bishop John Moore SMA, Bishop of Bauchi, Nigeria, Mgr Christopher Boyo representing the Archdiocese of Lagos, Fr Seán Lynch SMA (Classmate) and Fr Edward Hartnett SMA (co-worker in Lagos Archdiocese), a large number of SMA priests and a representative of St Patrick’s Missionary Society.  The congregation included a large circle of family and friends, Missionary Sisters of Our Lady of Apostles, Mercy Sisters, members of CASA, a representative of the St Gregory’s College Old Boys Association and former co-workers in Nigeria.  The MC was Fr Denis Collins SMA and Fr Cormac Breathnach SMA led the singing.