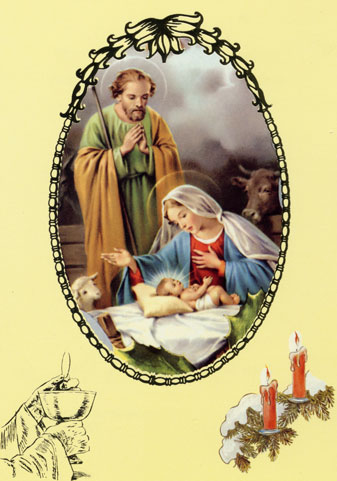 I was once travelling in a bus and in the seat in front of me was a young woman with a little girl of about 2 years. It was the week before Christmas. The little girl turned round and smiled at me and at an elderly woman next to me who said to the little girl: ‘Santa’. She immediately replied ‘ho, ho, ho’. This is the traditional call of Santa to children. I wondered who taught this to the little girl. It reminded me of the tremendous influence we can have on children for better or for worse.  Another story bears this out.

Many years ago I taught in a High School in the North of Nigeria. We lived on the school land. Across the road from us were a number of small houses with several families from different tribes and different religious beliefs. Sometimes the kids would come looking for sweets or biscuits which I kept for them. Once just before Christmas 3 of them arrived. I had a number of Christmas cards on my shelf and after welcoming them and before giving them some sweets I asked the first little boy as I pointed to a Christmas card: Who are they? It was a crib scene. He was a Muslim. He shook his head and said, “I don’t know”. Then I asked another little boy, from a Catholic family. The same answer. Next I asked the
little girl who came from a Protestant family and she said quite confidently. “That is the baby Jesus, Mary his mother and St. Joseph and the shepherds”. This really stuck in my memory because it showed the importance of our parents and other grown-ups for us when we are small. What they teach and model for is so valuable for us in our later life. Obviously it was the parents and family of the little girl who were the first teachers of the faith for her.

Today we celebrate the feast of the Holy Family. We celebrate a family who model for us what families are meant to be like. The child Jesus had to learn like any of us as the gospel tells us today. We are told that Jesus grew to maturity and wisdom before God and man. So it tells us quite clearly that Jesus was just like us and had to go through the same growth process. Who taught him? Obviously first of all, Mary and Joseph, his first teachers in the Jewish faith. Not only did they teach him but also their actions confirmed what they said. They took him to Jerusalem a number of times so he learned the importance of the great Jewish feasts and the need to take part in them.

Later on in his public life he would use for teaching about the Kingdom of God the image of a woman taking leaven, mixing it in with the flour so that it could become good bread. As a little child one can very easily imagine Jesus the little boy asking his mother what she was doing as she was baking, using leaven and flour and got the answer to his question. Another time one can imagine Jesus the little boy out for a walk with St. Joseph and seeing a farmer sowing seed in the field and asking St.Joseph why he was scattering so much seed as some would be wasted. He would have explained in sowing so much seed that the farmer was generous and even risked losing some on rocky or thorny ground.  Later Jesus would use the same image to tell his hearers about the generosity of God for us. Are we surprised that it was at home as a child that Jesus learned so much of what he used in his preaching?

But if we think there was no difficulty or conflict in this Holy Family we fool ourselves and misunderstand the gospels. Is it not easy to understand the confusion and justifiable anger of Mary and Joseph after having found Jesus, lost for three days and they asked him what he was up to? Then getting an answer that was mysterious to say the least. Did he not have enough sensitivity to understand the anguish and near terror of his parents whilst he was lost? When he gave up his secure job as a carpenter and decided to become a wandering preacher can we not imagine Mary really having difficulty with that decision? Would it not be the same for any one of us with a son or daughter who gives up a very good job to work as a volunteer in a poor African country with no guarantee of a job on their return. Add to that all the difficulties and dangers that volunteer workers undergo in a foreign country and culture etc.

At the very beginning of his life, Jesus with Mary and Joseph had to flee to Egypt, so he would also have experienced the lot of the millions of refugees having to flee their country we see on our TVs these days. These are just a couple of examples to show life was not always a bed of roses for this Holy Family and seemingly they weren’t always on the same wavelength. These days we also see on our TVs  Arab and Jewish parents weeping on learning of a son or a loved one being killed in that terrible conflict in the Holy Land. Can we not see Mary equally shattered as she stood at the foot of the cross?

Today more than ever, the family is under tremendous attack because the Evil One knows that it is the very basis of society. What a great responsibility for all of you who are parents. You are the first and most important teachers and models in the lives of your children. Your vocation is no less important than that of a priest, religious or lay person.  It is just a different way of responding to your baptismal calling.

“Lord Jesus, you showed us the very great importance of the human family when you chose to be born into one. We praise you and thank you for giving such a privilege to so many parents to be the first teachers of the faith. Give them the Holy Spirit to assist them in this very important vocation. Holy Family of Nazareth, Jesus, Mary and Joseph protect, guide and encourage all families as they try to lead their children into the way of all truth and love. Amen”.