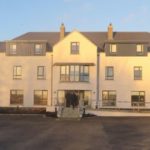 SMA House, Claregalway, Co Galway, H91 YK64 The presence of the SMA in Ireland goes back to 1876 when the then SMA Superior General, Fr Augustin Planque, sent Fr James O’Haire (a priest working with Irish immigrants in South Africa) to recruit English-speaking priests from Ireland to join the Society. In 1878 Fr Francis Devoucoux SMA came to Mayfield, Cork to take charge of the Apostolic school founded by Fr O’Haire. Read about the SMA presence in the west of Ireland In 1994 the SMA House in Claregalway was completed, to serve as a Promotion and Mission animation centre for the west of Ireland. It also serves as a retirement house for some of our priests. There are 11 SMA priests in residence. The different departments in Claregalway are: Family Vocations Crusade (FVC) – Fr Frank McGrath SMA – which fundraises to pay for the education of our 250+ seminarians from Africa, India, Philippines and Poland. Missionary Association Cards (MAC) – Fr Seamus Nohilly SMA – cards for different occasions (Birthdays, Exams, Weddings, Get Well, Bereavement etc) Mission Boxes – Fr Colman Nilan SMA and a team of dedicated lay people who assist in the collecting of boxes from the different shops all over the Province. Contact details:        091 – 798880       [email protected]

The west of Ireland has been a fruitful seedbed for SMA and OLA vocations. Our photo, below, shows the present Claregalway Community Leader, Fr Eamonn Finnegan, Vice Provincial Leader, with Sr Eileen Cummins (former OLA Superior General) from Craughwell, Co Galway and Sr Mary Crowley OLA (Cork). The wider Craughwell area has given nearly a dozen missionaries to the OLA and SMA down the years.

June 4, 2014
We present a series of photos taken during the 2014 SMA Claregalway Family Funday which took place on Sunday, 1 June. Enjoy! A shot of...

SMA presence in the west of Ireland

January 25, 2013
The presence of the SMA in Ireland goes back to 1876 when the then SMA Superior General, Fr Augustin Planque, sent Fr James O'Haire...

December 7, 2009
SACRED HEART COLLEGE, BALLINAFAD - CENTENARY Ballinafad House in the heart of Co Mayo was given to the SMA by Llewellyn Count Blake...