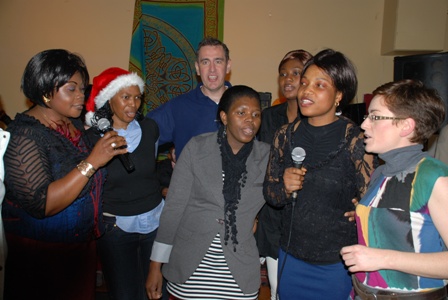 You may have noticed the last time you bought coffee that its price had risen and wondered why. Another sneaky price rise by the Supermarket chain perhaps? That might account for a few cents increase, but the real reason is elsewhere: it’s DROUGHT. East Africa, where some of the best coffee is cultivated, has experienced above normal temperatures for eight successive years resulting in devastating drought. Peoples’ sources of food and income are being burned up by the sun and by lack of rain. Result? A poor Coffee crop and more a much more devastating effect is widespread hunger and even famine.

Often we do not appreciate what all this means. We buy our food in tins or packets, and can easily replace one food with another.  Not in rural Africa.  Whole communities depend on one or at most two crops for food and income.  Without rain life dies, and people have to move.  It may be to another part of that country, or it may be to one further away, just as Irish people did during the famine years of the 19th century.  They are often termed economic refugees, but they are as equally vulnerable as those fleeing persecution.

In recent years we are slowly beginning to realise that our consumer life-style and demand for scarce resources is one of the biggest pressures on climate and on the consequent movement of peoples.

Last month we discussed “climate refugees”. This is another way of looking at the same phenomenon.  If life becomes progressively unliveable in in one area of the world, and that partly as a result of how we are living here, then the responsibility is ours to choose.  We can continue to live life as we’ve been accustomed to here, in a sort of “fortress Ireland”, or we can choose openness to the challenge and invitation of living in a global world where we all share a common humanity, and a common concern for others’ wellbeing.

We’ve always been pretty good in responding to humanitarian emergencies wherever they occur, but in these times we are also invited, by changing global circumstances, to open our doors to those who have come here, looking for a “room at the inn”.

No matter what your beliefs, the season of Christmas in Ireland always stirs up our deepest wishes for others’ wellbeing. The Christian story at this time speaks of a homeless couple looking for shelter and not finding it in “the inn”. Next time you sit down for a nice cup of coffee, think about that coffee farmer struggling against the odds to water his crop, and think about how the reductions you have to make in spending this year may actually bring longer term help, not perhaps to him, but to his children and grandchildren.