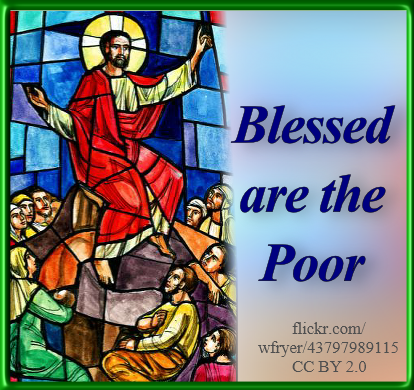 The Beatitudes, Charter of God’s Kingdom

During my sabbatical programme in the Holy Land in the Spring of 2008, I was privileged to have had the opportunity to pray at the Church of the Beatitudes. Set in the foothills of Galilee in the centre of a lush garden filled with date palms, cypress trees, scented flowers and bougainvillea, it seemed to me like a little taste of heaven. Scattered throughout the garden were small granite markers containing the words of each beatitude, written in Latin, inviting pilgrims to reflect and pray. I now wish I had been able to spend more time there, but, of course, there is always the possibility I may one day make a return visit.

Today’s gospel passage recounts Luke’s version of the Beatitudes, Jesus’ Kingdom Charter. They are shorter and more personal than Matthew’s version. Whereas Matthew has eight beatitudes, Luke has just four categories of people declared blessed: the poor, those who are hungry, those who weep, and those who are hated because of Christ. In Luke’s version, Jesus addresses his  audience – his disciples, along with a large group of people – in the second person, ‘Blessed are you..’, whereas in Matthew’s version, he addresses them in the third person, ‘Blessed are those...’ Unlike Matthew, Luke also balances his four beatitudes with four ‘Woes’ or warnings for the ‘well heeled’ and those the world puts on a pedestal.

The beatitudes are at the very heart of Jesus’ message and mission. Called ‘the Gospel within the Gospel’, they show clearly how radically different are the values of the Kingdom from those of the world around us. The world of Jesus’ time, just like the world today, was a world dominated by the rich and the powerful, a world radically divided between the ‘haves’ and the ‘have nots’. Jesus identifies himself with the ‘have-nots’ and proclaims them ‘happy’ or ‘blessed’, because their situation is about to change with the advent of God’s reign. In the beatitudes, Jesus was not speaking about the heavenly bliss the poor would enjoy after their harsh earthly pilgrimage was over. This view, popular in Western Christianity for many centuries, is a sad distortion of the teaching of Jesus. In the words of Albert Nolan OP, ‘Jesus was speaking, not of a future life beyond the grave, but of a future state of affairs on earth, when the poor would no longer be poor, the hungry would be satisfied, and the oppressed would see the end of their misery’. He was speaking about the fulfilment of the prophesy of Isaiah that he had proclaimed in the Synagogue of Nazareth, when he launched his messianic mission. He was confirming the promise of the God of the Magnificat, the God who ‘puts forth his arm in strength and scatters the proud-hearted’ who ‘casts the mighty from their thrones and raises the lowly’, who ‘fills the starving with good things and sends the rich away empty’.

In the Beatitudes, Jesus is promising the poor and downtrodden in particular that they will have pride of place in the Kingdom of God. He is telling them that they are God’s favoured children. In this, Jesus is drawing on many passages in the Hebrew Scriptures that point to the poor and oppressed as those for whom God has special care and concern. They are the ones who, as our first reading from the prophet Jeremiah tells us, have put their trust in the Lord and have the Lord for their hope. They are ‘like a tree by the waterside that thrusts its roots to the stream’, whose foliage stays green, ‘and never ceases to bear fruit’ (Jer 17:8). But Jesus goes further than the Old Testament prophets in proposing the poor and marginalized as models of discipleship who manifest the character traits, attitudes, and virtues befitting true disciples.

The Beatitudes have often been described as a framework for Christian living and indeed they are. They offer guidelines for living out our vocation as Christians. Each of us is called to be a person of the Beatitudes. We are called not to be first in this world, but rather to be first in the eyes of God. This means to live simply, to be humble, gentle, merciful and just in our relationships and to place our ultimate trust in God. Today’s readings challenge us to examine our lives in the context of the horizon of God’s Kingdom and its Charter, the Beatitudes.

I will conclude with a short poem by the Welsh poet, RS Thomas, entitled The Kingdom. It expresses simply, clearly and memorably what is involved in living the beatitudes:

It’s a long way off but inside it
There are quite different things going on:
Festivals at which the poor man
Is king and the consumptive is
Healed; mirrors in which the blind look
At themselves and love looks at them
Back; and industry is for mending
The bent bones and the minds fractured
By life. It’s a long way off, but to get
There takes no time and admission
Is free, if you purge yourself
Of desire, and present yourself with
Your need only and the simple offering
Of your faith, green as a leaf.