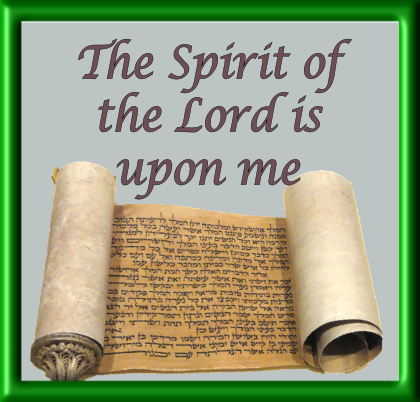 Theme:  Thy Kingdom come. Thy will be done on earth as in heaven.

There are notable parallels as well as contrasts between the first reading and the gospel of today. In our first reading from Nehemiah, the priest Ezra solemnly reads a lengthy section from the Book of the Law to a great assembly of the people of Israel gathered in an open square in Jerusalem. He thus re-constitutes them as ‘God’s holy people’ following the traumatic years of exile in Babylon. We are told that the people listened attentively and wept as they heard God’s word proclaimed to them. How attentively do we listen to God’s word and does it ever touch our hearts and move us to tears?

In the Gospel from Luke, Jesus also proclaims God’s word to those gathered in the Synagogue of his home town of Nazareth. The passage he reads is taken from the prophet Isaiah. ‘The Spirit of the Lord is upon me, for he has anointed me to bring good news to the afflicted. He has sent me to proclaim liberty to captives, sight to the blind, to let the oppressed go free, to proclaim a year of favour from the Lord‘ (Lk 4:18-19). Jesus then sits down, and, in words which launch his great mission of liberation, he says: ‘This text is being fulfilled today even as you listen’ (Lk 4:21). The words of Isaiah serve as Jesus’ manifesto. He has come to replace the old Jewish love of law with a new law of love and inaugurate the greatest revolution in human history.

Jesus’ mission leads him to challenge head-on the values of Palestinian theocratic society. The afflictions of the poor, then as now, were, in large measure, caused by repression, discrimination and exploitation by the rich and powerful, the upholders of the status quo. Jesus directs his mission to those who had been ignored or pushed aside: to the sick who were segregated on cultic grounds; to tax-collectors who were excluded on political and religious grounds; and to prostitutes and public sinners who were excluded on moral grounds. In his compassionate outreach to these ‘outcasts’, Jesus concretely embodies God’s kingly rule as good news for them. It means the end of their misery and the introduction of a new order of social relationships based on the principle of inclusion. No one is excluded from the love of God ‘who causes his sun to rise on bad people as well as good, and sends rain to fall on the upright and the wicked alike’ (Mt 5:45).

Some theologians have argued that Jesus had no social or political agenda, that he wanted to change hearts not social structures. However, as the great Scripture scholar, Tom Wright, points out, in the Judaism of Jesus’ day religion and politics were inseparable. As his contemporaries would have expected, Jesus sought to bring God’s kingly rule to bear on every aspect of human life. In the ‘Our Father’ he taught his disciples to pray: ‘Thy Kingdom come. Thy will be done on earth as it is in heaven’ (Mt 6:10). Jesus was not proclaiming a private or personal reign of God’s spirit in the souls of individuals. He was launching a revolutionary movement which would turn Israel and the world up-side-down. He wanted to establish God’s reign of justice, peace, truth and love in Israel and (through Israel) among all peoples.

Jesus lived, died and rose again in order to establish God’s kingdom on earth, and the task of his disciples is to continue that work. In the words of Pope Francis, the mission of the Church is ‘to proclaim and establish among all peoples the kingdom of Christ and of God’.  This mission entails the integral transformation of the world in which we live. In the words of Cardinal Suenens: ‘The preaching of the Gospel and its acceptance imply a social revolution whereby the hungry are fed and justice becomes the right of all’.

But we do not carry out this mission as isolated individuals. As the second Reading from St Paul’s First Letter to the Corinthians reminds us, we are the Body of Christ, and it is as the Body of Christ that we continue Jesus’ mission. The different gifts received by the members of the Church from the Holy Spirit complement one another, and, when properly used, build up the unity of the Church and serve its mission. The synodal process, launched by Pope Francis in October last year, and in which we are all called to take part, is a graced opportunity to deepen our sense of being the Body of Christ and collaborate more effectively in the service of the Church’s mission.

In a recent article in The Tablet, Jenny Sinclair reminds us that the purpose of our synodal journey is not primarily to change the Church. It is rather ‘God’s way of preparing the Church to save the world’. In the synodal process ‘the whole people of God come closer together on the journey of bringing alive the kingdom of God on earth’ (The Tablet, 1 January 2022, p.6). However, it is only when the Church functions effectively as the Body of Christ – when all its members are truly open to the divine Spirit and to one another – that it can be a credible sacrament of God’s reign of love and justice. So we pray: ‘Lord, make us instruments of your peace, justice and love in our confused and wounded world.’