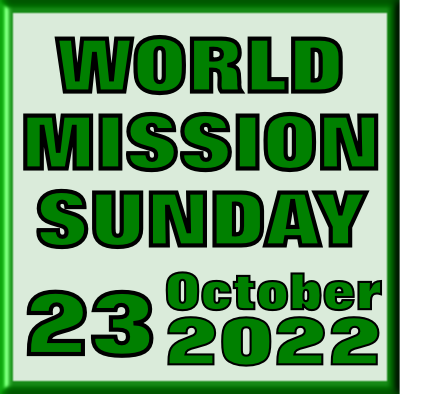 Homily for the 30th Sunday of Year C

Theme: Called to be joyful witnesses of Christ

Although you would never guess it from the results of the Irish synodal consultation, mission is the reason for the Church’s existence. The great  Swiss theologian, Emil Brunner, expressed this in a memorable image  when he wrote that ‘the Church exists by mission just as fire exists by burning’.

The Church’s mission is the responsibility not just of priests and religious but of the entire people of God. By virtue of their baptism, all the members of the Church are called to be missionaries and to witness to Christ.  In his Message for World Mission Sunday 2022, Pope Francis states that we are sent by Jesus ‘not only to carry out but, above all, to live the mission entrusted to us; not only to bear witness but, above all, to be witnesses of Christ’. Francis is here echoing the words of Pope Paul VI in his famous Exhortation on Mission, Evangelisation in the Modern World (1975). Insisting ón the primacy of witness, he wrote: ‘For the Church, the first means of evangelization is the witness of an authentically Christian life…The men and women of today  listen more willingly to witnesses than to teachers, and if they do listen to teachers, it is because they are witnesses’ (EN 41).

We are called not just to be witnesses to Christ but to be joyful witnesses.     The emphasis ón joy is essential. In the past Christianity has often been presented as a rather grim and joyless affair, placing heavy emphasis on guilt and failure. But the realities of sin and failure are not the centre piece the Christian story but rather the redeeming love of God who forgives, heals and makes new. And it is this experience of love that is the source of our joy and  that enables us to give ‘joyful witness’.  However, this joy which we are called to share with others, is not to be identified with the false jolity of those who ignore the reality of suffering in the world around them or avoid pain in their own lives – the joy of those who cannot endure any sorrow. To the contrary, it is a joy that enables us to bear peoples’ pains and sorrows. We witness to this joy not so much by what we say as by what we are or, better still, by what the experience of God’s tender and constant love has made of us.

While all baptised members of the Church are called to bear witness to Christ and the Gospel of love, whereever they are, there is also within the Church a special calling to mission outside one’s own cultural or national setting. Down through the centuries the Church’s mission to the nations was carried out by the members of missionary congregations and societies, ready and willing to embark upon a courageous outreach to  peoples and cultures outside their homelands. Irish missionaies and their supporters have made, and continue to make, an outstanding contribution to this missionary outreach.  Without the inspiration and leadership given by these women and men, the missionary impulse of the Church would have gradually diminished and died out, and the Church would have never realised its essential vocation to bring the Good News to the ends of the earth. On this day, Pope Francis asks us to remember with gratitude the many missionaries who gave their lives so that others might experience the love of God incarnate in Christ.

Today, no less than in the past, missionaries prepared to leave their homelands to bear witness to Christ beyond the existing frontiers of the Church are vital for the health of the Church’s missionary vocation. Rejecting the idea the era the mission to the nations is over, Pope John Paul II, stated, to the contrary, that it is ‘still in its infancy’. And he went ón to urge the members of missionary orders and societies to renew the grace of their specific charism and to undertake ‘new and bold endeavours’  to bring the gospel of Christ to places and  cultures which have yet to experience it (The Mission of the Redeemer 66).  Pope Francis in his Message for World Mission Sunday, endorses this call, stating that ‘the Church must constantly keep pressing forward, beyond her own confines, in order to testify to all the love of Christ’.

The Church’s missionary outreach is a great act of love.  Its purpose is not to transplant the Church as it exists in Ireland to new places,  but to bring about ‘a new creation’, one that respects the culture of the people. Missionary activity is  a two-way process of giving and receiving in freedom and in love.  Missionaries nurture the seeds of the God’s Word already present in the lives and cultures of the people among who they work, so that these seeds may come to full flowering in the light of the Gospel of Christ. In this way, the Catholic Church becomes what it is called to be – truly Catholic and universal. I end with the fervent prayer of Pope Francis:

‘Would that all of us in the Church were what we already are by virtue of baptism: prophets, witnesses, missionaries of the Lord, by the power of the Holy Spirit, to the ends of the earth! Mary, Queen of the Missions, pray for us!