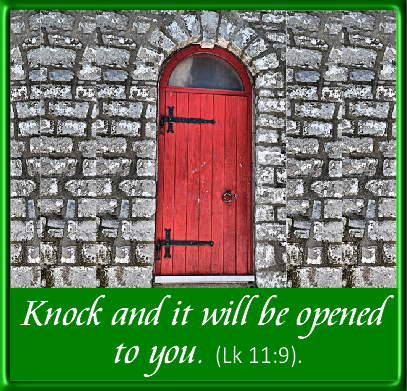 I find it hard to think of Jesus as a pessimist, but the final statement at end of today’s gospel does suggest that he wasn’t too sure if he would find any faith on earth when he returned at the end of time. ‘When the Son of man comes, will he find faith on earth?’ (Lk 18:8). While this statement does not reflect the general mind-set of Jesus, it does show that, at times, he could be frustrated at the lack of response to his message and ministry. He was human, after all – as well as divine.

Prayer is the main topic in our readings today. It is a topic that looms large in the teaching and ministry of Jesus. When his disciples asked him to teach them how to pray, he gave them that wonderful prayer, the ‘Our Father’ (cf. Lk 11: 2-5). St Luke tells us that Jesus often went off into the hills alone to pray, sometimes spending the whole night in prayer (cf. Lk 6:12). He instructed his disciples not to be trying to impress others when they pray, but to pray in secret:  ‘But when you pray, go into your room, close the door and pray to your Father, who is unseen. Then your Father, who sees what is done in secret, will reward you’ (Mt 6:6).

In today’s gospel reading, Jesus encourages his disciples to persevere in prayer and not lose heart. Easier said than done, you may say! Jesus is referring especially to what we call ‘prayer of petition’ (asking God for things). It is perhaps the most common kind of prayer. When we bring our needs and the needs of others to our heavenly Father, we are responding to the explicit instruction of Jesus: ‘Ask and it will be given you; seek and you will find; knock and it will be opened to you’ (Lk 11:9).

Jesus illustrates his message with a rather droll story about a corrupt and heartless judge, and a poor widow, who pesters him, insisting on getting what is hers by right. The judge eventually relents and accedes to her request, not because of any concern for justice, but because he wants to be left in peace! Jesus is not comparing God to the corrupt judge. He is contrasting them. What he is saying is that, if a corrupt judge is eventually moved to grant the plea of a persistent widow, how much more swiftly will our infinitely just and loving Father respond to the prayers of his beloved children?

We may not always receive what we ask for in prayer, but God always answers our prayers, though it may be only in retrospect that we realise and appreciate his response. In the prayer of petition we are not trying to put pressure on God to get him to change his mind. We are presenting ourselves to our heavenly Father just as we are, with our needs and concerns, and trusting in his providential care, to grant us what we really need. The Dominican theologian, Herbert McCabe, warns us about not trying to be sophisticated when we pray. We should come before God, like children, as honestly as we can. ‘It is no good pretending to yourself that you are full for high-minded aspirations. You have to wait until you are. If a child is treated as if she were an adult, she will never become an adult. Prayer is the way in which our Father in heaven leads each of us by different paths to be saints, that is to say, to be with him.’ The American poet, Mary Oliver, says the same thing in her short poem entitled, Praying:

‘It doesn’t have to be
the blue iris, it could be
weeds in a vacant lot, or a few
small stones; just
pay attention, then patch

a few words together and don’t try
to make them elaborate, this isn’t
a contest but the doorway

into thanks, and a silence in which
another voice may speak.’

Our first reading from the Book of Exodus illustrates the importance of supporting one another in prayer. It recounts the story of how Moses turns to prayer when his people are attacked by a hostile tribe, the Amalekites. While the battle rages, Moses stands on a hilltop praying with outstretched hands. He knows that only God’s power can save them. When Moses grows weary and his arms begin to flag, his companions come to his help, keeping his arms raised up: ‘But Moses’ arms grew weary, so they took a stone and put it under him and on this he sat, with Aaron and Hur supporting his arms on each side’ (Ex 17:12). What a lovely image of how we can sustain one another in prayer, especially when our hearts grow weary and we feel we are losing the battle.

Here in this Eucharistic community we have come together as the Body of  Christ, not just to bring our personal needs and concerns before the Lord, but also to hold up one another’s hands and sustain one another in prayer and in the struggle of life. The terrible tragedy in Creeslough, Co Donegal, is a wonderful example of how – in the midst of such utterly indescribable heartbreak and grief – a community has gathered together to hold each one in prayer as well as through practical signs of support. There are indeed times when our hearts grow weary, when our energy flags, and like Moses, we can no longer stand alone. It is then that the quiet, unobtrusive prayer of others become the needed oxygen to keep the weakening flame of our own faith alive.  So, to borrow the words of the popular R.E.M. hit song, Everybody Hurts: