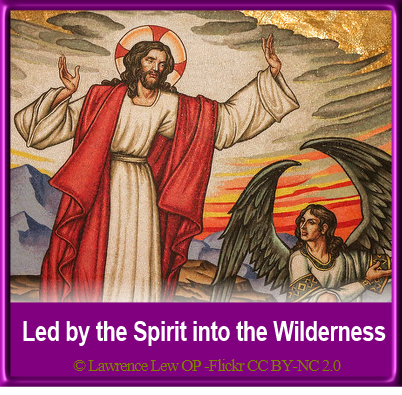 Led by the Spirit into the Wilderness

Jesus’ life was dominated by a single passion: to proclaim and establish on earth God’s reign of justice, peace and love. His mission was not about saving people’s souls by taking them out of the world and bringing them to a place called heaven. It was about bringing God’s kingdom on earth and challenging people to embrace it. But how was he going to carry out this mission entrusted to him by the Father? He had no blueprint or plan of action to guide him. What he had was the Holy Spirit, the Spirit who came upon him at his baptism. This same Spirit – the spark of divine energy that brought the universe into existence and ignited the fire of life – now leads Jesus out into the wilderness where he is tempted by Satan for forty days. In this way Jesus was led to clarify the nature of his mission in the service of God’s reign.

Jesus’ forty days in the wilderness was a decisive and defining experience for him. It determined the path his messianic mission would take. It led him to reject several false paths he could have chosen – the path of violent revolution adopted by the political revolutionaries of the day, the Zealots, and also the way of compromise adopted by the Jerusalem elite, the Sadducees and High Priests. His wilderness experience led him to choose instead the path of redemptive suffering. The way of Jesus would be to turn the other cheek, to walk the second mile and to take up his cross and give up his life on Calvary. He will defeat evil by letting evil do its worst to him, by suffering it in love and forgiving his enemies. He rejects the temptations of Satan and commits himself unreservedly to carrying out the will of his Father.

I had often wondered what it would be like to live in a wilderness or desert. My curiosity was satisfied in the Spring of 2008, while on a Sabbatical programme in Jerusalem. The programme included an experience of life in the wilderness. Along with my companions, I spent a short but memorable time in the Sinai Desert, including a night sleeping in the open. I had imagined the desert as a place of sand, heat and dust. But it wasn’t like that at all. Instead of sand, there were rocks – huge mountainous boulders on every side – terrifying and yet strangely protective. Instead of heat, there was piercing cold that prevented me from sleeping. Instead of dust, the air was crisp and clean. Never in my life had I seen so many stars in the sky, shining brilliantly, a sight of awesome beauty! And then there was the silence, not just the absence of noise but the sense of ‘hush’ which made you want to speak in whispers so as not to disturb the silence. It was an unforgettable experience. It made me feel small and insignificant and yet immensely privileged. It made me want to clear my mind and de-clutter my heart, to let go of things I thought I needed, and focus on ‘something not sold for a penny/In the slums of Mind’ (P Kavanagh, The Ascetic).

The message Jesus formulated in the wilderness and that we are called to take to heart in these days of Lent is to ‘Repent, and believe the Good News’ (Mk 1:15). This means to turn away from the clutter or excess in our lives and to listen to the One who speaks to us in nature, in people and in the depths of our hearts. Lent is not a dreary, sad season to be patiently endured. It is a joyful season, as today’s Lenten preface reminds us: ‘Each year you give us this joyful season when we prepare to celebrate the paschal mystery with mind and heart renewed. You give us a spirit of loving reverence for you, Our Father, and of willing service of our neighbour. As we recall the great events that gave us new life in Christ, you bring the image of your Son to perfection within us’.

Lent is a time to experience afresh the embrace of God’s love; a time to join Jesus in the desert, at least symbolically, and allow the Spirit to lead us on an inner journey. It is a time to take a good look at ourselves and, where necessary, realign our priorities. Yes, Lent invites us to repent, but repentance is not just our work. It is the fruit of the experience of God’s love and a work of grace, as Fr Flor McCarthy SDB reminds us the following reflection: