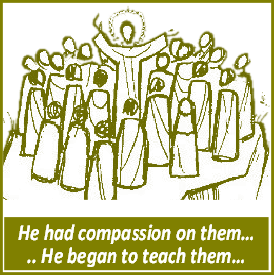 I knew a mother who cared for a son for nearly 40 years. He was diagnosed with Parkinson’s disease and by his early teenage years he was almost totally incapacitated. Though he had not been expected to live for very long, through her absolute devotion to him, he lived far longer than anyone expected, even the medical people. Until her own death, some years before her son, she stayed at his side, day and night.

To live is an unselfish way is never easy. It’s far easier when we do our own thing, when we happen to be in good mood and it causes a minimum of inconvenience and disruption. But when the ction is not of our own choosing, when we don’t feel in the mood and it is sprung on us at awkward moments. In such cases we have to forget ourselves and set aside our own feelings and plans. A real sacrifice is involved.  Isn’t it a great test of a person when, at the drop of a hat, they put aside their own plans to help another person?

It’s a consolation for us to know that Jesus too had to cope with interruptions. He too had his plans upset.  Today’s gospel tell us that his disciples were in such demand when he sent them out to preach and heal that they had scarcely time to eat. They had seen this in the case of Jesus himself when he and the disciples could not even have a meal. So his relatives set out to take charge of him because they were convinced he was out of his mind.

In today’s gospel Jesus decides to take the apostles apart to a quiet place for a break. This time he wasn’t thinking of himself but of his apostles. They had just come back from the mission he sent them on. He saw that they needed rest. He took them to a quiet place apart. He knew that the carers too needed to be cared for.

However, things did not turn out as planned. The people followed him. How did Jesus react? Far from getting annoyed he welcomed the people. Doesn’t this tell us a lot about the kind of person he was? He was moved with pity for them. Don’t we all appreciate people who show compassion to us in a time of need?

The three readings today speak of God’s compassion. In the reading from the prophet Jeremiah, God speaks out against those who failed to care for those he had sent them to. Many of them failed, being more interested in their own well-being and a good lifestyle at the expense of those to whom they were sent. So the compassionate God promises that he himself will look after the sheep, his people, who have been dispersed. Furthermore, in the days to come, he will he raise up someone who will be a true shepherd for Israel, His son Jesus. In the Letter to the Ephesians, Paul tells us that God, through Jesus, will gather into one those who have been ‘far off’, that is the Gentiles who were regarded as not belonging to God’s people, and the Jews who ‘were near’, that is God’s people.  Before Jesus, Jews could not accept that the Gentiles were also God’s beloved children. It is the compassion of God which will do all this.

Those of you parents with sick children or ageing parents will know this too. How often when the children were growing up and got sick at night or at others times did you not spend sleepless nights looking after them? Is this not compassion on your part.

It is very important to remember that when giving us the great commandment to love God, our neighbour as ourselves he also told us to love ourselves too.  It is not a choice. Jesus knew that if we do not, we will not be able to care for others when necessary.

‘Lord Jesus, thank you for revealing to us that you are a God of total compassion.  Help us to be compassionate to others also, relying on the gift of the Holy Spirit to do so. Amen’.

Edited from a homily of the late Fr Jim Kirstein, SMA (RIP)