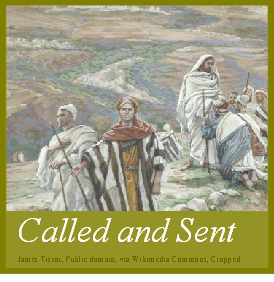 Called and Sent on Mission

The related themes of vocation and mission are highlighted in the readings of today’s Mass. Amos, the first of the great prophets, lived in the eighth century before Christ. This was a time of peace and prosperity in the northern kingdom of Israel but a time of wholesale corruption and exploitation of the poor. In the first reading, Amos is forced to defend his vocation as a prophet to Israel.

The Gospel recounts the call and first mission of the twelve specially chosen disciples of Jesus.

Amos, who came from a poor village in the southern kingdom of Judah, courageously denounced the injustices inflicted upon the poor and drew on himself the ire of Amaziah, one of the leading members of the priestly caste. Amaziah lived in the wealthy Royal Sanctuary of Bethel and was a lackey of King Jeroboam II. It was not in his interest to have the unjust practices of the political establishment questioned by Amos. So he orders Amos to go back to his own land (Judah) and prophesy there. In his reply Amos defends his prophetic vocation as a direct call from the Lord, not an inherited position with status, like that of Amaziah and the priestly caste to which he belonged. He was poor farmer, taking care of sycamore trees, before the Lord summoned him to go and prophesy to the people of Israel. This is the call he must obey, not the orders of a well-heeled flunkey of the royal court. The example of Amos reminds us of our prophetic vocation as members of Christ’s Body to speak truth to power, to point our and denounce the corrupt practices of powerful elites, and to defend the rights of the poor and exploited people of our time.

Today’s gospel passage from Mark continues where last Sunday’s left off. Following his rejection in his home town of Nazareth, Jesus summons twelve of his disciples and sends them out on mission, into the villages and towns where he himself had already preached. He shares his mission and authority with them – the same authority he received from his Father to cast out evil spirits, to heal and call to repentance. Jesus sends them out with detailed instructions, not about what they are to preach – though the call to repentance is mentioned – but rather on how they are to live. They are not to travel on their own, but two by two. This is in contrast to the individualistic style of the maverick preachers, self-appointed prophets and bogus healers who were familiar figures in first century AD. They are not to take anything for the journey except a staff: ‘no bread, no haversack, no coppers for their purses’; not even ‘a spare tunic’ (Mark 6:9).  In other words, their lifestyle is to be marked by a radical dependence on God and on the generosity of the people to whom they minister. Finally, the locus of their ministry is to be people’s homes rather than the synagogues.

Mark’s account of the first apostolic mission may not, at first sight, seem very relevant to the complex challenges facing the Church in the twenty-first century. Yet it identifies the essential calling of the Church and all its members. Like the apostles who are its foundation stone, the Church is called to be a community of missionaries, continuing the mission of Jesus Christ in the service of God’s reign. Its authority and power resides not in itself, but in the word of the one who calls and sends it. It is challenged to travel light, putting its trust in divine providence rather than in material resources, and being open to receive as well as to give. It is required to confront the forces of evil and serve as the agent of God’s healing power in a sick and broken world. Above all, it is enjoined to witness to God’s power by a radical simplicity of life-style. Pope Paul VI underlined this challenge when he stated, over forty years ago,  that witness of life is the primary and indispensable form of the Church’s mission – one that is especially relevant in our time when people are more influenced by witnesses than by teachers or preachers (cf. Evangelii Nuntiandi, 41). So let us, in the words of the American poet, Amanda Gorman, ‘step out of the shade, aflame and unafraid’ and bear witness to the healing love of Christ by the lives we live.

I will end with a prayer:

‘Jesus, teach us to live by faith and share in love,
so that we may be free of cloying comforts
and the protective padding of material goods.
Teach us to accept without embarrassment the help that others give us.
But help us to give ourselves in return,
finding a family in all who need to hear your word.
Risen Lord, who comforted your apostles
when they had laboured without success throughout the night,
show us the true worth of the human techniques we employ.
Do not allow us to despise them,
for even the miraculous draught would be impossible without a net.
But neither let their constant use enslave us.
Remind us rather that your presence is the power that changes hearts.’

(taken from the book, Catalysts, by Rene Dionne, MAfr., and Michael Fitzgerald, Mafr.)