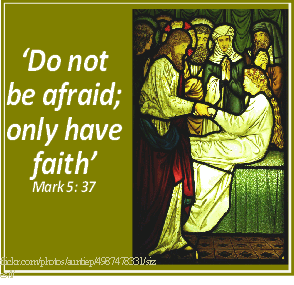 Today’s gospel reading from Mark continues where last Sunday’s ended with the account of Jesus calming the storm. It reports two miracles performed by Jesus after returning to the Jewish part of Galilee from the land of the Gerasenes: the raising to life of the daughter of Jairus, and the healing of a woman with a haemorrhage she had endured for twelve years.  In each case, Jesus’ miracle is in response to a courageous act of faith.

Jairus, we are told, is a synagogue official, and therefore a man of considerable standing within the Jewish community. Clearly distraught by his daughter’s worsening illness, he approaches Jesus, falls to his knees and earnestly pleads with him to lay his hands on her and heal her. ‘My little daughter is desperately sick. Do come and lay your hands on her to make her better and save her life’ (Mk 5:23). We can only imagine the courage and humility it took for this ‘important man’ to swallow his pride, abandon his dignity, and fall at the feet of Jesus.

As Jesus accompanies Jairus to his house, followed by a large crowd, we are told that a woman with a twelve-years’ bleeding complaint approaches Jesus timidly and with apprehension. Her condition would have rendered her legally ‘unclean’. At the slightest suspicion that she was suffering from a haemorrhage, the people accompanying Jesus would, most likely, have driven her away for exposing them to defilement. Understandably, then, she approaches Jesus surreptitiously from behind, secretly touches his cloak, and is immediately cured. In response, Jesus turns and asks who touched him. The woman probably could have remained anonymous; yet, at Jesus’ question, she steps forward and acknowledges what she has done. She comes clean ‘with the whole truth’ of her ‘shame-inducing’ condition. Jesus responds by acknowledging her faith and sends her away with the words that must have sounded like music to her ears: ‘My daughter, your faith has restored you to health: go in peace and be free from your complaint’ (Mk 5:34). By addressing her as ‘daughter’ Jesus is ending her sense of isolation and including her in the family of God’s beloved sons and daughters.

At this point, we can imagine Jairus’ mounting anxiety. His daughter is seriously ill and may be dying, and now Jesus’ arrival is being delayed. As if to heighten the tension Mark tells us that messengers suddenly arrive from Jairus’ house and confirm his worst fear: his daughter is dead. No point in troubling Jesus any longer!  Jesus ignores their message and reassures Jairus with words that echo the message of last Sunday’s gospel: ‘Do not be afraid; only have faith’ (Mk 5: 37). When Jesus, Jairus, and the accompanying crowd all arrive at the house of Jairus, they find family and friends mourning the dead girl. But Jesus enters the room where she is laid out, takes her by the hand, and instructs her, in Aramaic, to arise: ‘Talitha, kum’.  Jairus’ faith in Jesus has not been in vain. His daughter is restored to life. And Jesus is revealed not only as having power over nature but also over death, reversing the work of the devil, as the first reading from Wisdom indicates (Wisdom 2:23-24).

These two overlapping miracle stories contain a number of striking contrasts and one very important common element. The main character in one story is a man, Jairus; in the other, it is a woman. One is a public official, an important person in the community. The other is a woman who has spent all her money and was probably reduced to penury in seeking a cure for a shameful condition that had isolated her from the community. One approaches Jesus publicly. The other approaches him secretly. Yet, in both cases, it is faith that leads them to seek out Jesus in their distress and that brings about his miraculous response.

In a world where sickness and loss are still present realities, the miracle stories in today’s gospel remind us of the Lord’s healing kindness. The faith of Jairus and of the woman with the haemorrhage invites us to reflect on our own faith in Jesus and take steps to nurture and develop it, confident that Jesus’ response will be gentle, loving and healing.

So, let us pray: ‘Heavenly Father, through the twists and turns of life, brighten our horizons and make our hearts receptive to the message of your Son, Jesus, who healed the sick and raised the dead to life. Strengthen our faith in his healing and life-giving power. Amen.’