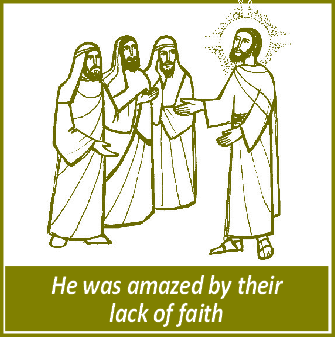 He was amazed at their lack of faith (Mark 6:6a)

The theme of rejection looms large in today’s scripture readings.  Ezekiel, the prophet of today’s first reading suffered rejection because he predicted the destruction of Jerusalem. He was among the Israelites driven into exile by the Babylonian King, Nebuchadnezzar, and is the only prophet called by God to prophesy outside Israel. The exile was a traumatic experience for a people who saw themselves as specially chosen by God. Captured and enslaved in Babylon, they had lost everything they held precious: their freedom and the things which gave them a sense of identity as a people – their land and their Temple. Their most cherished hopes has been dashed. Many of them were so disheartened that they lost faith in the Lord and in his promises, and turned to the gods of their oppressors. No wonder they refused to listen to Ezekiel. Nevertheless, Ezekiel is empowered by the Spirit and mandated by the Lord to continue proclaiming his word to the people, ‘whether they listen or not’ (Ezekiel 2:5). We might ask ourselves who are today prophets, whose preaching is falling on deaf ears?

Our second reading reminds us that St Paul’s mission, while remarkably successful, was not all plain sailing and that he experienced what he calls ‘a thorn in the flesh’ to stop him ‘from getting too proud’ (2 Corinthians 12:8). While Paul never states clearly what precisely this thorn in the flesh was, many Scripture Scholars suggest that it may refer to one or other of the practical difficulties he mentions in verse 10: ‘weaknesses, insults, hardships, persecutions, and constraints’. All of these Paul is prepared to accept for the sake of Christ. ‘For’, he adds, ‘it is when I am weak, that I am strong.’ (2 Corinthians 12:10).

In today’s gospel from Mark, Jesus returns to his home town of Nazareth not to a hero’s welcome, as one might expect following his raising of the daughter of Jairus to life,  but instead to jealously, ridicule, and rejection. Clearly taken aback by the people’s ‘lack of faith’, Jesus responds with words tinged with bitter disappointment: ‘A prophet is only despised in his own country, among his own relations and in his own house’ (Mark 6:4). We know that, following this incident, Jesus would not return again to his home town or set foot in another synagogue in Galilee.

Why did Jesus’ own townspeople reject him? Perhaps because they knew him too well or thought they did. He had lived among them for thirty years as the son of a humble tradesman, and they never saw any signs of extraordinary power or wisdom in him. So,  when he started to speak in their synagogue, they were ‘astonished by his wisdom’, but not disposed to accept him. Instead they raised questions about the source of his wisdom  and his identity: ‘Where did this man get these things? What is the wisdom given to him? How are such mighty works done by his hands? Is not this the carpenter,  the son of Mary and brother of James and Joset and Jude and Simon? And are not his sisters here with us?’ (Mark 6:2-3). These remarks clearly show the prejudices that acted as a stumbling block to their acceptance of Jesus and his message. There is also here an echo of an earlier scene in Mark’s gospel, where Jesus’ relations ‘set out to take charge of him’, convinced he was ‘out of his mind’ (Mark 3:21).

It is easy for us to stand in judgement over the people of Nazareth. But, if the historical Jesus were to come among us today and preach in our Churches, would we recognise him and accord him a better reception? An uncomfortable question surely, and difficult to answer with certainty! Like the people of Nazareth we would be meeting with someone we think we know very well. But how well do we really know Jesus? Would he confirm or challenge our expectations of him? Would we listen with respect to a lay man coming from a humble, working class, background and with no formal religious education or religious status? Would we recognise the presence of God in his words and actions?  What are the barriers for us in recognising God at work in our world today?

Today’s readings call on us to open our hearts, our minds and our whole being to the challenging and often surprising presence of God among us: in others, in the events of our lives, in the Church, in our world. God is always speaking to us, but we have to listen and, to echo the words of the poet, Patrick Kavanagh, allow him ‘to surprise us’.

Let us pray: Heavenly Father, you break through our deafness of heart to speak to us the Word of life. Grant that we might hear and recognise your voice and respond with faith through Jesus Christ, your Son and our Lord.  Amen.