Home Justice & Peace Working for justice, peace and understanding between Christians and Muslims 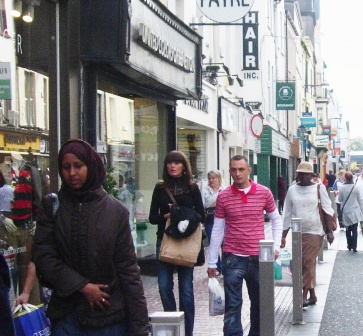 Working for justice, peace and understanding between Christians and Muslims

Since the Second Vatican Council Dialogue with people of other religions and particularly with Muslims has become an integral part of the Church’s Mission.  “The plan of salvation also includes those who acknowledge the Creator, in the first place among them are the Muslims: these profess to hold the faith of Abraham, and together with us they adore the one, merciful God, mankind’s judge on the last day.”  (Documents of the Second Vatican Council)The Church’s Mission of Dialogue with Muslims means that it wishes to promote mutual respect, understanding and cooperation between Muslims and Christians.  This openness to interaction and cooperation reflects the Gospel call to “love one another as I have loved you.” In the past few decades Ireland has changed.  There are now about 45,000 Muslims living here.  Muslims are a permanent part of our community and are among the neighbours we are called on to love.There are many places in the world where the relationship between Christians and Muslims is marred by violence, persecution and injustice.  Thankfully this is not the case in Ireland.  Part of our Christian calling is to prevent this from happening by building positive relations with Muslims present here and so provide an example of tolerance and cooperation that can be followed by Muslims and Christians in other parts of the world.

etween us …..
Below are two quotations, one from an address made by Benedict XVI in 2006 .  The second is from a letter signed by 137 Muslim Scholars and Leaders  which was sent to Christian leaders in 2007.  Both highlight the urgency and need for Muslims and Christians to work together in order to create the conditions of trust and cooperation that will allow both communities to live in peace with each other.

“Inter-religious and inter-cultural dialogue between Christians and Muslims cannot be reduced to an optional extra. It is, in fact, a vital necessity, on which in large measure our future depends”    Pope Benedict XVI , 2006

The urgency implied in these statements is made clear by the growing polarisation between Muslims and Christians in many parts of the world.  This has been fuelled by wars, persecution, by injustice and by individuals and groups stirring up religious divisions in order to achieve political or material gain.

Here in Ireland
Here in Ireland, over the past twenty years the Muslim population has grown. In contrast to what has happened in other countries relations between Muslims and Christians have been good, marked by cooperation and peaceful coexistence.  This  is good and very much in line with what the Church teaches about relations between Muslims and Christians.  Yet we do not live in isolation – we are influenced by what we hear and what is happening elsewhere in the world.  So for us in Ireland there is also a sense of urgency, a need to do something now, both to preserve and build upon the good relations that we have.   The  Papal Encyclical Redemptoris Missio points to what we all can do when it says,

“Each member of the faithful and all Christian communities are called to practise dialogue, although not always to the same degree or in the same way.”   Redemptoris Missio Each of us, in our own way, has a part to play in bringing about a just society in which we can, faithful to our beliefs, live  as good neighbours with people of other religions.  This is part of the  mission we as Christians are called to.  In response to this, Cois Tine set up by the SMA to provide pastoral support to immigrants, is running a project to promote Dialogue between Muslims and Christians in Ireland.  This project aims to promote mutual understanding, respect and cooperation between  members of these two religions who now live together as neighbours in the same towns, streets and communities.

In the last few years Nigeria has made international news headlines because of terrorist attacks involving bombings, violence and destruction. Unfortunately, the perpetrators claim to be doing so in the name of and for the good of Islam.  Although Muslim leaders have publicly condemned these actions they have polarized Muslims and Christians in Nigeria.  Commenting on the violence Archbishop John Onaiyekan has said, ‘the good neighbourliness that has characterized many communities where Christians and Muslims live together has been put under serious strain.  The engineers of division are almost succeeding in … making us enemies of one another.’In Nigeria informal dialogue and interaction does exist.  Muslims and Christians work together, live together and engage with each other in the course of everyday life.  However, openness to engaging in this this kind of dialogue is waning especially in the Northern States.

In addition to religion, ethnicity also plays a part in this division.  By and large Muslims are Hausa-Fulani, while Christians are of numerous minority tribes. Different ethnic groups, have different cultures, different perspectives on history and different visions of the path to a better tomorrow. There are also formal occasions of interreligious dialogue organized by government, faith-based bodies, and NGOs.  These are important as they involve individuals who are influential religious and political leaders in their own communities.  While Muslims and Christians live together peacefully in some parts of the country this coexistence is becoming less evident across the Northern States. Division along religions and ethnic lines is growing and mutual fears and suspicions are multiplying.  Archbishop John Onaiyekan recently said that Nigerians seem “to be getting used, more and more, to rejecting one another.  Ugly rumours and hate messages fill the air and we are getting immune to the lack of compassion, solidarity and sympathy with one another.  There is danger in the air”.  While many are sceptical about the effectiveness of dialogue there is no doubt that, in the North of Nigeria  it is the only way forward.  It is only through dialogue that mutual distrust and fear can be addressed.  Dialogue is necessary. There is no other way.

A Mission of Dialogue
As a response to the situation

in Northern Nigeria the Interfaith Council of Muslim and Christian Women’s Associations was established when Sr Kathleen McGarvey invited women leaders of the major faith groups to come together for a one-day seminar in May 2010. This event made it clear that women in Northern Nigeria, whether Muslim or Christian, shared many common concerns. Among these are the lack of peace, unemployment, poverty, illiteracy, domestic violence, violations of women’s rights, poor educational and health services, women’s voicelessness, and incompetent and corrupt government. The women believe that they have a role as peacemakers in society and they must do so in dialogue with one another.  By being Mothers of a culture of peace, women can by example show that harmonious religious co-existence is possible.

Sr Kathleen reports that since the first meeting the Council has grown from strength to strength as more women’s faith groups joined the organisation.  They have run seminars, workshops, and conferences  on the subjects of conflict, peace, women, and dialogue.  Political, traditional and religious leaders of both faiths have participated in these events as well as hundreds of Muslim and Christian women. Collectively the women have made Press, TV and Radio statements calling for harmonious co-existence. They have also joined together in visits to show solidarity with those displaced by the interreligious violence and conflict.  The Women have also initiated an Interfaith Council of Muslim and Christian Youth Associations thus spreading their call to Dialogue.   This mission for Dialogue is a mission for Peace.

This information was first published in the African Missionary Magazine, No19 Spring/Summer 2012