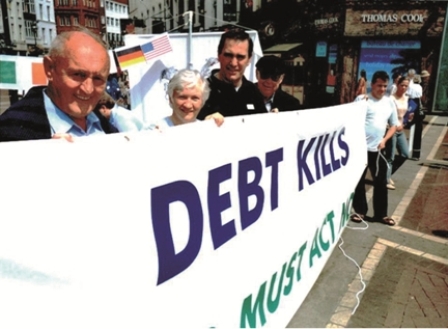 At the core of Christian life is justice, for we cannot love our neighbour without treating them justly.  Faith and Justice cannot be separated. Faith therefore, not only implies belief but also a way of life. This is why SMA’s and other missionaries have not only preached but also dug wells, built schools and hospitals as well as Churches.

In previous editions of this magazine we highlighted the work of SMA’s such as Frs John Haverty, Donal Fennessy, Oliver Noonan, Anthony Kelly, Sr Kathleen McGarvey OLA and others. They have not only preached the Good News but also loved their neighbour by working for Justice.  They have, and still are, doing this through actions that promote human development, recognise the dignity of each person and provide individuals with the opportunity to fulfil their God-given potential.  Such work is an essential  part of the Church’s mission. Here in Ireland and in Europe, the SMA also works for justice in Africa by contributing to the work of the Africa Europe Faith and Justice Network (AEFJN).  It was formed in 1988 following a request made by Pope John Paul II for “missionaries to be present wherever decisions are made that affect the lives of people in the developing world.” The role of the AEFJN is to highlight and challenge the unjust effects that decisions made by European Governments and Corporations may have on African peoples and countries.  Trade practices, policies and legislation often maximise corporate profits and protect European interests at the expense of the African countries providing the materials and produce that generate wealth in Europe.

The AEFJN is guided by the Gospel and Church Teaching and recognises the right of every human person to enjoy their fair share of the resources of creation.  Sometimes this is denied. Economic and social policies adopted by the European Union may directly affect the price an African farmer gets for his Cocoa, Ginger or Grain.  In turn, this affects his children, the food they eat, whether or not they get the medicines they need or even if they can go to school.

It is a sad reality that  business and economic decisions made in Europe contribute to the fact that millions of Africans do not have the basics we take for granted and which we see as fundamental human rights.  The right to clean water, to adequate food and to medicines are a reality for most people in Europe; they are NOT for most people in Africa. By working within the European Union structure in Brussels and through branches in European and African countries the AEFJN gathers information about inequalities caused by unfair trade and political relationships. This is published as widely as possible in order to raise awareness of the injustice.  The AEFJN also acts by lobbying and campaigning in order to influence fair decisions at EU and Governmental level in European Countries. The SMA sees the action and advocacy of the AEFJN as an expression of the faith from which justice cannot be separated – it is a practical and necessary way of loving our African neighbour.

Together for 25 Years
This year the AEFJN celebrates its 25th year.  Since 1988 it has helped to bring about positive change and succeeded in reversing unjust trade practices.  Nationally and through its Brussels Office the AEFJN has worked to exert a positive influence on those who make decisions.  In the photograph below we see an example of  an occasion when members of the AEFJN have campaigned on the streets of Ireland against the unfair burden of illegitimate International Debt on Africa.

Efforts on this issue made by the AEFJN and other organisations have had significant success.  The work of informing and lobbying has also borne fruit by influencing the terms of trade agreements, practices affecting the availability of medicines in Africa and other positive changes in policies.

Still a long way to go
While the AEFJN has much to celebrate it is acutely aware that Africans are still suffering because of problems originating in the developed world, e.g. climate change.  This problem created largely by the profligate use of fossil fuels in the developed world is turning African farmland into desert.  Tax Evasion by multinational companies and the leasing of huge tracts of African land (amounting to more than 16 times the landmass of Ireland) are also robbing Africans of what is rightly theirs, depriving them of the wealth and resources with which they could develop and support themselves.  These are issues that the AEFJN and the SMA will continu e to highlight as matters of injustice needing a fair solution.

Living our Faith and loving our neighbour is something every Christian is called to.  We do this in different ways. The AEFJN and the SMA witness to this call, in Africa and where decisions affecting the lives of Africans are made. We are all called to be just and loving in our work, in family situations, in how we relate to our neighbours, friends and even to enemies.  We will do well if we follow the principles and aims that have guided the AEFJN.  If we respect human dignity, give preference to the poor and seek the common good, then we will be loving our neighbour as ourselves.

AEFJN Ireland has members from 33 religious congregations and societies and also lay persons. All are deeply concerned about Africa and its people and want to contribute actively to bringing about more equitable relations between Europe and Africa.  The role of the AEFJN Ireland is to create awareness and to be a voice for the reform of structural injustices found within Irish and European policies that negatively affect populations in Africa.

This information was first published in the African Missionary Magazine No.21 Spring/Summer 2013