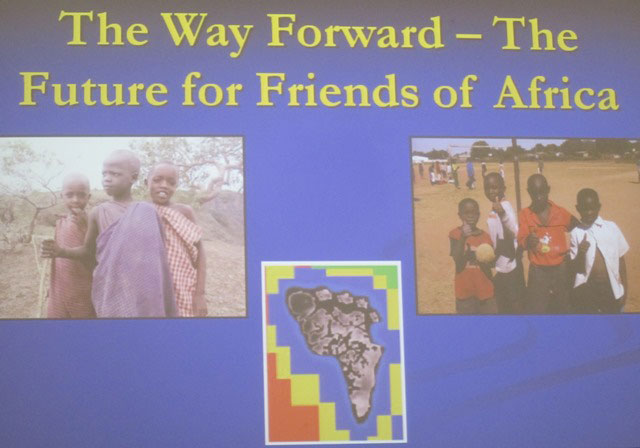 As part of the Friends of Africa 15th anniversary celebration (Saturday 12 October 2013) we had presentations on the three countries where FOA members work, either as short or long-term volunteers. The focus was on the future and the plans FOA have to build that future. But in order to build a future one should keep an eye on the past, especially with the intention of learning from it.

The FOA motto – Small Steps Together – underlies the different projects in which FOA is involved. All involved – FOA members and the people in Africa – should have a sense of ownership, achievement and empowerment. The FOA is also committed to sustaina bility in the projects in which they are involved. Facing into the future, conscious of the changing SMA and FOA realities in Ireland and Africa, it is important that there are clear agreements between all parties so that the work undertaken achieves the best possible result.

In 1999 the first FOA volunteers set out for Zambia where Fr Fergus Conlon (RIP), P J Gormely and others received them and helped them settle into mission life in Ndola diocese (part of the Copperbelt Region). These early volunteers – Quintin O’Kane, Tony McCloskey, Kevin McDonagh, Brian Higgins and Angela Dougan – were involved in different areas including working with the homeless, street children, night outreach, education and counselling, small business development. long-termer Anita McWilliams. And even though not listed here they each made a particular contribution to the FOA project in Zambia.

In 2008 Bernie Connolly volunteered to go to South Africa where she spent two years teaching in Holy Family Combined School, a Catholic school in Mogwase in the diocese of Rustenburg. Although the school was an English medium school and pupils had a good level of oracy, most struggled with reading and writing. With support from FOA, Bernie established a School Library which now provides a wide range of reading material for all ability levels.

At the same time as supporting long-term volunteers in Zambia and South Africa the FOA began to assist young people (third-level students) who wanted to spend a shorter period in Africa. And so was born the ‘short-term volunteer’ (STV) – a six-week intensive work programme in Africa. The first group went to Zambia in 2001. Six years later STVs headed for South Africa and in 2008 Tanzania received their first group. Up to now 212 short-term volunteers have served in Africa. Many of the early STVs were in third-level education. But responding to a demand to facilitate second-level students FOA began a programme for school groups. This began in 2010 and the FOA now has formal links with four schools – Holy Trinity (Cookstown), St Pat’s (Armagh and Dungannon) and Sacred Heart, Newry.

According to a United Nations survey east Africa has a high initial primary school enrolment (about 90%) but 30-40% of pupils fail to complete their primary education. Other challenges in east Africa include student-teacher ratio, secondary enrolment, youth literacy rates. Fr John Gallagher (an SMA priest from Crossmolina, Co Mayo) decided to invite the FOA to run ‘education camps’ on the lines of the popular Dromantine Holiday Camp he was familiar with from his time as a seminarian. There would be time for lots of sport etc but also a specific period each day for learning English and Mathematics.

Anita McWilliams has been in Zambia since November 2012 and is involved with the Twafwane Self-Help Village project (pictured right).

Founded by Fr Anthony Kelly SMA, the FOA has been involved in this project for many years, initially with building and more recently addressing social needs and community development in the village. Some years ago the villagers expressed the wish to have a school for their children. In June 2011, FOA volunteer, Eileen Havern began a Pre-School but the temporary accommodation was susceptible to damage during the rainy season and there were no proper desks or seats. With Anita’s arrival the project is about to take a major step forward – the Local Council have allocated land for a proper school building, which will serve as a community centre on evenings and weekends. DAFA (Direct Aid for Africa) have agreed to fund the purchase of the land and assist with materials and labour costs. With Anita keeping an eye on it all the foundations are now complete and she has extended her placement for a further six months to see the completion of the building.

Meanwhile, back at home, FOA are hoping to find a volunteer to continue the work in Zambia – and see it though the next phase: the establishment, running and resourcing of the pre-school in Twafane.

For information on how to become involved, visit  www.friendsofafrica.org.uk