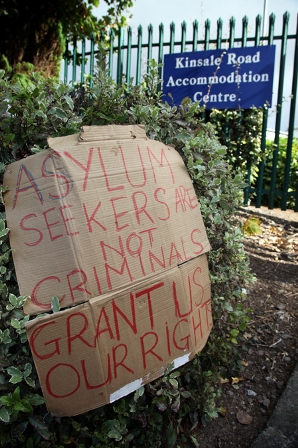 Walk in their Shoes
Official Ireland has always regarded immigrants and asylum seekers as problems. That is why legislation emanating from the Department of Justice has been so strict and inflexible, limiting rights and opportunities to remain. Justification for this harsh regime was based on the premise that a more liberal approach would act as a “pull factor”. That mindset has not disappeared and Minister for Justice Frances Fitzgerald remains officially opposed to asylum seekers working.”  Irish Times, Sept. 17, 2014…  (Yet making work available) is what happens in all but one other EU State and it offers these vulnerable people renewed confidence and a sense of worth. A right to work is, however, just one aspect of the direct provision system that requires urgent reform.

Other aspects of this punitive “direct provision and dispersal” system have been condemned by international agencies. The treatment of children and their exclusion from third level education has received particular attention. Minister of State Mr O Riordáin has described the direct provision regime as “inhumane” while Ms Fitzgerald has also expressed concern. Adults in these centres receive a weekly allowance of €19.10 (children €9.60); are isolated from society and can experience depression as a result. Inmates have recently engaged in protests and hunger strikes because of their “prison-like conditions”. (Many receive psychiatric care, having never been mentally ill before.)

Opposition to direct provision is being organised by the Irish Refugee Council. Political muscle has come from Mr O Riordáin and from Minister for Education Jan O’ Sullivan, while Ombudsman for Children Emily Logan has spoken publicly on behalf of the 1,600 children affected. Significantly, the Ombudsman is legally barred from investigating issues relating to asylum and direct provision”  (taken from Irish Times, Sept 17, 2014.)

While the average length of stay in a direct provision centre is stated to be about 4 years, there are many who have been in this situation up to 8 or 9 years, which is totally inexcusable. Picture this: you are a mother with three young children. Your husband fled first and you don’t know where he is now. He just came home one day from work and said he had to go. You were pregnant with your third child, who was born when you finally arrived at an unknown destination, which turned out to be Dublin, Ireland, a country you had never heard of before. Before all this happened you had a good life: your husband worked hard as a laboratory technician in a big hospital. You grew vegetables and kept chickens as well as looking after everything else. Sometimes you did some dressmaking to supplement the salary, as you were well known for making beautiful wedding clothes.  Your husband had been threatened and beaten up and you and your children were also threatened with violence for not knowing where he had gone, or why. “For your own sake” he had said.  You were driven to a big house away from the city, and given a room for you and your children to live and sleep in. You couldn’t prepare your own food. The children had no place to play. However the two eldest began school, and you got some medical care for your baby and yourself. The children wanted to go on trips with their class mates but you had no money for that. They couldn’t bring their friends “home” for sleep-overs to this single room. It was almost impossible for the older ones to study for exams. Yet they did well. But you know that they have had no experience of a home, of sitting together as a family for a meal. Bit by bit you picked up English as no one spoke your language. The “justice people” were always very strict and didn’t want to believe your story. One of the worst things now is the uncertainty. Gardai have been known to arrive in the early hours and take some individuals away for deportation. Panic sets in. Could that happen to you? How long more will you have to wait? You try to keep a brave face for the children’s sake, but sometimes…They get into fights among themselves too with all that pent up frustration. How will they be when they are adults, you worry?

A Native American proverb wisely states that you don’t really know another person until you step into their shoes and walk around in them. Undoubtedly we would all surely find the shoes of asylum seekers almost impossible to walk around in if we were “in their shoes”. Sometimes all it takes to have compassion is a little imagination. Jesus had this pithy expression: “Love your neighbour...as yourself.” That is more than a saying, it is an expectation, even a commandment, something Jesus expects from us; something which makes a Christian stand out from the crowd. A companion phrase is the following: “Do to others as you would want them to do to you”.  If I were living/ surviving in a direct provision centre, what would I want others to do for me?