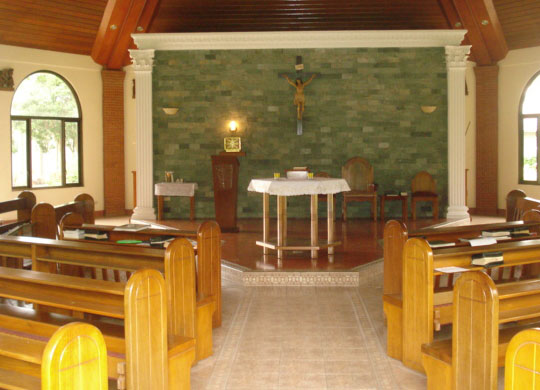 The Chapel of the Martyrs of Africa (above) at the SMA International Spiritual Year Centre in the Philippines was the scene of great joy on Saturday, 14 April 2012, as three more seminarians took the First Oath of Membership in the Society of African Missions. It was the final step for the three young men in the intial phase of their training in the SMA.

Bernie Segovia Babol is from Victoria City in the diocese of Bacolod, southern Philippines. Born in 1981, he has a Bachelor of Science degree in Business Administration and has completed one year of Philosophy studies.

Christopher Masige Mukoji was born in 1988 in Nyakahoja, Archdiocese of Mwanza, Tanzania. He began his studies with the SMA in 2008. After a Preparatory programme he did his Philosophy at the Consolata Institute, Nairobi, Kenya.

Fighton Phiri was born in the Zambian capital, Lusaka in 1985. In a happy coincidence this area is now the parish of St Therese of Lisieux, Chainda which is under the pastoral care of the SMA. Fr Paddy Barry SMA, from cork City, is the Parish Priest. After completing his secondary education, Fighton entered the SMA Formation House in Kabwe and did his Philosophy studies at the nearby St Augustine Major Seminary, Mpima.

The ceremony will be presided over by the SMA Superior General, Fr Jean-Marie Guillaume, who is on an Official Visit to the Philippines and India.

Also in attendance were the Superiors of the three new members: Fr Alan de Guzman (Philippines, pictured on right) and Fr Thaddeus Mokaya (Great Lakes District-in-formation, which covers countries in eastern and southern Africa, including Tanzania and Zambia).

The Philippines District-in-formation has 10 priest members and three temporary members. SMA priests from the parish and two other houses in Manila also attended, as well as many of our SMA Mission Partners, a similar Vocations Support group as the Irish Province’s Family Vocations Crusade (FVC).

The SMA in the Philippines have pastoral care of the Good Shepherd Parish in Las Pinas, Manila where Fr Gus O’Driscoll SMA (Rathcormac, Co Cork) is Pastor and Fr German Patiga and Tony Gelaga are Assistant Pastors. The SMA House of Studies is in Quezon City, Manila and it is from there that our seminarians attend local Colleges for Philosophy and Theology studies.

Our picture shows Fr Joseph, Christopher, Bernie, Fr Robert (Superior) and Fighton on a ‘day out’ at Tagatay, which is not far from our International Spiritual Year Centre in Silang, Cavite Province.

Learn more about the SMA in the Philippines here.

We wish Fighton, Christopher and Bernie every blessing in their continuing formation for ordination as priests in the Society of African Missions.

May the Holy Spirit guide, guard and direct them always. Amen.