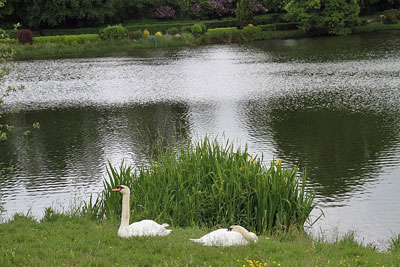 Two years ago I met a man who had just returned from England where he visited his brother. The Social Services in England had contacted him because his brother was old and badly undernourished. He had his own house but it was clearly very neglected and dirty. After visiting his brother in hospital he returned to the house to try and clean up the place. Imagine his great surprise when he found almost a quarter of a million pounds sterling hidden in a suitcase in an old cupboard. His brother had been a lawyer, and obviously a successful one but since the death of his wife had neglected himself badly. If this brother had made use of the money in the suitcase he could have had a very comfortable lifestyle. But he didn’t do so and suffered the consequences.

It would appear that many Christians are like this. They don’t call upon the power of the Holy Spirit in their lives. They have a great treasure at their disposal. They can call upon the Spirit at any moment for help. But unless they do they may be undernourished, depriving themselves of the power of the Spirit in their lives. Just like the lawyer who deprived himself of food and other comforts.

In the gospel today we hear Jesus appearing to his fearful disciples after his resurrection. These fearful men are locked in a room. Their faith and trust in Jesus seems to have disappeared. Now he comes into their midst and offers them peace and joy. The opposite of faith is not lack of faith but rather fear. We try to rely on ourselves only and as a result may feel incapable of responding to what God is asking of us. So when Jesus appears to them in today’s gospel he breathes on them and says ‘Receive the Holy Spirit’. This recalls the first creation when God breathed life into Adam, transforming him from dust into a human being. Here we have a new creation, now enlivened by the Spirit. This is a new transformation. If we offer our lives to the Holy Spirit for transformation, we will find that we will gradually be changed, not just spiritually but on other levels too, emotionally, psychologically, in our relationships etc.

The reason why the Spirit wants to do this for us is because Jesus tells the disciples today that as the Father sent Jesus, he is sending them to be his witnesses. Christian witness comes from an inner conviction. This is only achieved by spending time with Jesus in prayer regularly. People will know a real witness because he or she speaks from personal conviction. And Christian witness has to end in outward testimony; a person who is prepared to say and live by what he believes to be true. It is impossible to achieve our call to witness to Jesus without the powerful Holy Spirit who so much wants to help us.

Jesus then tells the disciples after breathing on them the Holy Spirit: ‘Those whose sins you forgive, they are forgiven, those whose sins you retain, they are retained’. We must read the text properly. Jesus did not say that it was to priests only that this gift of forgiveness was given. It was to all the disciples. This is very important for us to accept. After love, the gift that Jesus spoke most about when he was with them was forgiveness. In the ‘Our Father’ in Matthew’s gospel chapter 6, forgiveness is the only quality that has a condition attached to it – ‘forgive us our sins as we forgive those who sin against us’.

Why this emphasis on forgiveness? Look at the world around us. Nearly all the terrorist attacks, all the bitterness and hatred between nations, ethnic groups, individuals, even those claiming to act from religious beliefs come from unforgiveness. In Israel, Jews and Palestinians keep recalling what the other side has done and want to take revenge and so the spiral of violence continues. Al Queda terrorists keep remembering past injustices as they see them and so won’t forgive, so revenge is the response. Unfortunately, this is true in so many places throughout our world. It is no less true between individuals. We have all heard people saying, ‘I will never forgive him/her/them for what they did to me and my family’.

Jesus knows that the refusal to forgive will continue the spiral of violence. He knows too that forgiveness is the sheer gift and work of the Spirit. Human will power is just not enough. We read in St. Luke’s gospel that as Jesus hung on the cross about to die he prayed, ‘Father, forgive them they do not know what they are doing’. How often do we pray for this gift of forgiveness or at least to want to forgive?

In the first reading today when the disciples had received the Spirit they began to speak in such a way that everyone understood them. This is not the gift of being multilingual as such but rather that they were able to communicate to all their listeners the Good News. In the second reading then we are told that there is a variety of gifts given by the same Spirit. But all have the same goal, to bring about unity and harmony, the very opposite of what unforgiveness does.

Today’s feast is telling us clearly that the Spirit works powerfully still in many different ways and in many different peoples. We are sent as witnesses, proclaiming and living forgiveness. Difficult as this is, it has to be a central part of our witness.

Let us pray often for the help of the Spirit. ‘Come Holy Spirit, renew each of us so that we can work together to renew the face of the earth. Amen’.