Home ___Storage Previous Reflections THE GOD OF ALL DIRECTIONS – MAY 2009 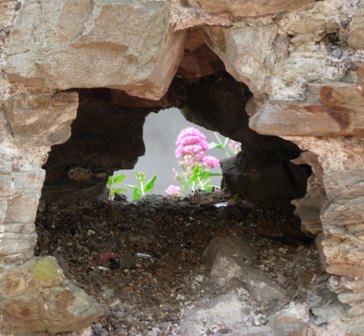 THE GOD OF ALL DIRECTIONS  – Reflection for May 2009.
Where do you go to look for God? To a Church?  To a quiet place?   To your own inner room?   Easter tells us that the Risen Jesus is no longer confined!   There is no place in the world where we cannot find God!  Here is a story from Islam which illustrates this:

“Once upon a time an old Sufi dervish set out to make the Great Pilgrimage to Mecca. It was a difficult journey under any conditions, and this year was the wor st. Such crowds! And the path rough and uneven. Worst of all, the sunbeat down on the old man’s head without mercy.  “I must stop for a while”, the holy man decided. So he lay down by t he side of the road, justoutside Mecca. He was hardly asleep before he felt himself being shaken roughly awake. “Sufi, get up,” the voice said, angrily.  “Some Sufi you are,” the im am went on, “You’re a disgrace”. He circled round the old man, flailing his hands and shaking his head. “How dare you lie down at the time for prayer”, he shouted, “with your head turned to the West and your feet pointed toward God in the holy shrine”.

“The old Sufi stirred a bit, opened one eye, looked at the man, and smiled, “I thank you, sir, for your concern”, the Sufi said, “So before I go back to sleep”, he went on, a grin playing at the corner of his mouth, “would you be so kind as to turn my feet in some direction where they are not pointing at God?”

Adapted from Welcome to the Wisdom of the World, and its Meaning for You,Joan Chittister, Eerdmans, 2007.