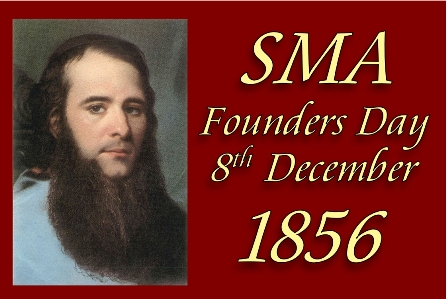 The 8th of December is SMA Founders Day – an occasion that is remembered and celebrated in SMA Houses and Parishes all around the world.  This year is special as the cause for the Canonisation of Melchior de Marion Brésillac has advanced with the declaration that he is Venerable, a first step on the road to Sainthood.  Below is a brief outline of his life, work  and priorities. Early Years of his life
Melchior de Marion Brésillac was born on 2nd December 1813 in the town of Castlenaudary, near Carcassonne in the South of France. He was the eldest of five children (three boys and two girls).  His parents – Gaston and Josephine – have been described as “full of Christian faith”. Because of the state of primary education and the prevailing “atmosphere” in post- Revolution France, Gaston and Josephine decided to educate the children themselves. Melchior proved to be a good student.

Further Education
At the age of nineteen, Melchior announced that he wished to become a priest. He went to the Diocesan Minor and Major Seminaries. A long-time friend and Biographer states: “Everybody liked him (Melchior)…his school-mates because he was always cheerful and in good mood, straightforward and honest…his teachers because he was flexible, ready to work and trustful…with an immutable fidelity to all the rules of interior discipline and all the laws of the church”.  The Formators (and his Bishop) also saw in Melchior great leadership potential, as well as being a “born teacher”. He was ordained a priest for the Diocese of Carcassonne on 22nd December 1838. 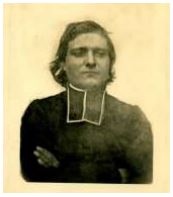 Priestly Ministry
Father Melchior de Marion Brésillac was appointed as Curate in his own native parish (St. Michel) – a practice not uncommon at that time. For the next two and a half years, he was happy in the usual pastoral ministry. He was respected as a caring, prayerful and hard-working priest… but deep within his being, he felt the call to be a missionary. He realized that this feeling had “been dormant in him since childhood, side by side with a strong desire to be priest.” After much discernment and strong opposition – particularly from his father – Melchior left to join the Paris Foreign Missions Society on 2nd June 1841. He was aged 28.

Missionary in India
After taking the Oath of membership in the “Paris Foreign Missions” (M.E.P.), Father Melchior de Marion Brésillac left for India (by boat) on 12th April 1842. For the next twelve years, Melchior served in the Pondicherry area of Tamil Nadu State in the South of India. In quick succession, he held the posts of Curate in Salem District, Superior of the Minor Seminary and much to his own surprise, nominated Bishop of Coimbatore at the age of 32.   During these years – and particularly as a Bishop – Melchior de Marion Brésillac wrote and spoke about his deep-felt convictions concerning the unjust “caste system”, the urgent need for a local clergy and the necessity to reform Liturgical Rites (which seemed to accept almost everything in the “culture of the people”). His views met with indifference or even strong opposition. He wrote reports to Rome in which he stressed the necessity and urgency for reform. In the meantime, he tried “to advance the work of God” as best he could.

There came a time, however, when Bishop de Marion Brésillac was faced with a serious problem of conscience. And so, after a protracted period of discernment, he felt that he had no alternative but to resign. The resignation was eventually accepted by the Pope in 1854.

The Foundation of the Society of African Missions
Bishop de Marion Brésillac returned to France via Rome. While there, he was asked to write a comprehensive report on “The State of the Church in India”. It was well received and acted upon some years later.

The desire for missionary service continued to burn in the heart of the young “retired” Bishop. He studied various possibilities, prayed and sought advice. Finally, he requested the Congregation for the Propagation of the Faith to send him to Africa. This was a largely unknown Continent at that time. Melchior de Marion Brésillac felt that there was huge scope for his particular vision of evangelisation. Eventually – in a letter dated 26th February 1856 – Rome formally stated that Bishop de Marion Brésillac was allowed to go to Africa – provided that he set up a group of like-minded missionaries – to continue the mission. This was truly a moment of great joy – as well as a big challenge – for the new Founder.

The Society of African Missions (S.M.A.) was formally consecrated to Our Lady at the great shrine of Our Lady of Fourviere, overlooking the city of Lyons, France on 8th December 1856. With the help of some “excellent” priest volunteers, new aspirants and many friends and contacts, the work of laying the foundations for the new Society intensified.

In 1858, Bishop de Marion Brésillac formulated “The Fundamental Articles of the Society of African Missions” – a charter which describes the aim, nature, government, life-style and spirituality of the Society. On 28th October 1858, the first S.M.A. missionary team left for Freetown Sierra Leone, West Africa. They arrived (after “an interesting” voyage) on 12th January 1859.

In the meantime, the “Bishop Founder” was anxious to get to his new “area of work” or “Diocese”. With two new missionaries, he arrived at Freetown on 14th May 1859 to find a city “in a state of terror” – in the grips of a Yellow Fever epidemic. People were dying like flies. As there was no vaccine or proven treatment available at that time, the little group of six S.M.A. missionaries took whatever precautions they could and tried to help the sick.

Within three weeks of the Founder’s arrival, three missionaries had died (on 2nd, 5th and 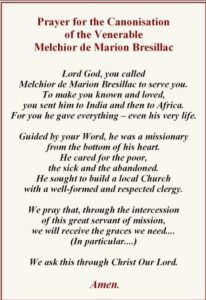 13th June). Another member was sent back to France (on a passing ship) by the Founder due to “long-term headaches and strange behaviour”. All the time, Bishop de Marion Brésillac kept those in France and in Rome informed – expressing his “grief and sadness, the possible negative effects on young candidates at home”. He also wrote about his hopes and plans for the future.  In all his communications he expressed his “resignation to the will God”.

Then, the Founder himself grew gravely ill. On the morning of 25th June 1859, it was clear that the end was near. His only remaining confrere (Father Reymond – who was ill himself) was “carried” to the Founder’s bedside and administered the Last Rites. The priest was too ill to remain there and was “carried” back to his own sick bed.  Mr. Bremond (from the French consulate) and Mr. Quinn (an Irish businessman) kept vigil. Towards the end, the Founder opened his eyes and muttered: “Faith, Hope and Ch…” He was unable to find the last word. Mr. Bremond added “Charity” – to which the Founder said: “Thank You”. He then closed his eyes and died. He was 45 years old.

The burial took place next day. There was no Catholic priest to lay him to rest (as Father Reymond was close to death).  A Protestant minister said some prayers at the graveside and a few “notables” of Freetown were present.  Father Reymond died three days later and was buried with his brethren. Thus ended the first S.M.A. mission to Sierra Leone, West Africa…

Postscript: The work of the S.M.A. has lived on… Over the past 160 years, members of the SMA have served the people of Africa and of African origin.  May the life, teaching and example of Melchior de Marion Brésillac continue to inspire a missionary commitment in Christians today and into the future…

“A great fruitfulness has come from the Calvary of Freetown”.