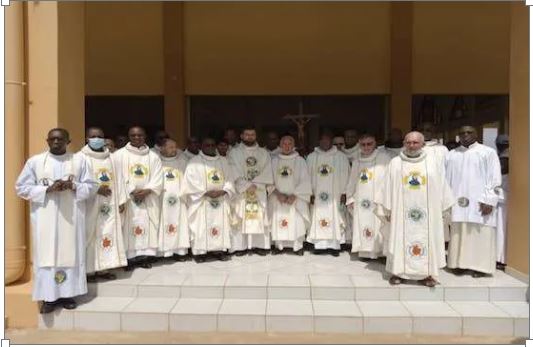 On December 8th, SMA Founders Day, La Croix International published the article below reporting that – the Society of African Missions (SMA) has been serving the people of Côte d’Ivoire since 1895.
By- Guy Aimé Eblotié | Ivory Coast
The priests and brothers of the Society of African Missions (SMA) were the first Catholic missionaries to successfully evangelize Côte d’Ivoire, beginning in 1895 when they first arrived in the West African country.  They gathered for Mass at Our Lady of the Apostles Parish in Abobodoumé on December 6 to give thanks on the 125th anniversary of their arrival in Ivory Coast.  The parish church is located in the Diocese of Yopougon, where the SMA provincial house is located.

The history of the evangelization of Côte d’Ivoire has known two main stages. The first attempt in the 17th century did not produce great results. It was only when the SMA arrived in the 19th century that the Gospel was truly implanted and the Church began to grow.  It was thanks to the work of Fathers Alexandre Hamar and Émile Bonhomme, two SMA priests who arrived in Côte d’Ivoire on October 28, 1895.  Governor Luis-Gustave Binger had invited them to come educate and train future clerks of his administration.

A seed that became a big tree
Father Arthur Kola, the secretary of the apostolic nuncio in Côte d’Ivoire, presided at the anniversary Mass. And in his homily, he compared the SMA as the mustard seed that Jesus used to explain the Kingdom of Heaven. “Your mission started from a small seed that you sowed, too small for the needs, the dice that came at that time, and it has become a tree so big that everyone can find a reference point,” he explained. Father Kola also offered a prayer for the success of future initiatives.

“In thinking about what is to come, the dice to be rolled and the milestones to be planted, I invoke, with you, the Virgin who is venerated here as our Lady of the Apostles, so that through her maternal intercession she will continue to support the church in Côte d’Ivoire,” he added.

Vocation, primary evangelization
After 125 years of presence, the fathers who are SMA members want to continue walking in the footsteps, carrying out the evangelization work assigned to their missionary society. To do this, one of the challenges facing their province in Côte d’Ivoire is the formation of its members.  “As a new province, we are called to train our young confreres,” said Father Narcisse Seka Ogou, Provincial Superior of the SMA in Côte d’Ivoire.  “We need to look for means beyond pastoral care in order to be able to take care of the formation of these young people who will go on mission,” he emphasized.

Father Ogou pointed out that there is “a lack of young people who commit themselves to following Christ for the mission”.  But he said that will not deter the SMA’s mission.  “We will always continue our commitment to the most abandoned and to primary evangelization, which is the purpose of work,” the provincial promised.

“We commit ourselves in a special way to issues of justice, peace and the protection of the environment,” he added.

With permission from La Croix International.