Home Africa The power of a Motswana smile 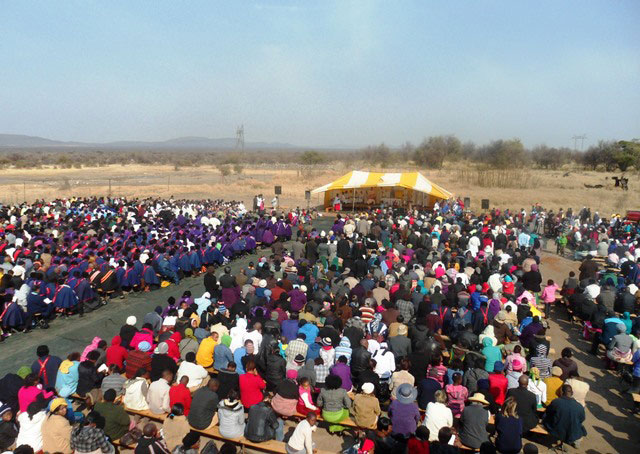 The power of a Motswana smile

On Sunday, 8 December 2013, Fr Noel Gillespie SMA launched his book, An African Village – The story of a journey into meaning, at the SMA House in Vleeschfontein, South Africa.

The book tells the story of the first Roman Catholic Church amongst the Botswana in the interior of Southern Africa. It is written in the style of a praise song of Africa. The first Mission amongst the Botswana was established by the Jesuits in Vleeschfontein in 1883. Vleeschfontein village today lies within the boundaries of the Rustenburg Diocese where many SMA priests work under the leadership of Bishop Kevin Dowling CSsR. The SMA team in South Africa – working in two dioceses (Rustenburg and Pretoria) are led by Fr Pius Afiabor SMA (from Nigeria). An outdoor celebration in Vleeschfontein, the site of the first Mass among the Botswana

During the course of the launch Fr Gillepsie shared the following thoughts:

Our beloved former President, Nelson Mandela, lies in state as we the SMA family in South Africa gather to honour Our Lady of the Immaculate conception. The book providentially articulates his sentiments on the day of his inauguration in 1994: “We are born to make manifest the glory of God that is within us. It is not just in some of us: it’s in everyone.”

The story honours the various peoples of Southern Africa. It tells something of some of the many individuals from various ethnic backgrounds who each in their particular moment lived out the truth of Gods Glory within. The Galway poet Graham Gillespie captures this truth in his lines:

The following excerpts from the book give a flavour of the embryonic Rainbow nation that was South Africa in the late 19th Century. The Bushman is the collective name for the first peoples of Southern Africa many of whom still live today as hunter-gatherers as they have done for over 40,000 years. Africa, the cradle of humankind, is where the human story begins. In Africa we first walked upright. In Africa, a moment came when merely dividing of the spoils of the kill gave way to the first conversations around a camp fire. On African soil we celebrated our first supper together.

Fr Noel Gillespie is pictured with some parishioners.

To share supper together around the campfire, ‘eavesdropping waiting for the first stroke of night that will strike alight the moon once more’ is to invite the spirit of our ancient African continent to wrap around us an alert attentiveness.

When the bushman poet, Kabbo, looked into the camp fire at night he saw

“…the wood ashes that lie here must become the milky way that must white lie along the sky”.

Surely nature poetry in love with the creator.

The Botswana: The main population group who inhabit our story. The Jesuit missionaries of 1879 have the sensibility of the artist. They see a young African herd boy is a subject worthy of the artist’s attention. ‘While going through the wild beauty of these mountains we saw in the setting sun, a great herd of cattle coming down the mountain slope and going home to the kraal on the opposite slope of the valley. There were two to three hundred head of cattle in the herd. It was most interesting to watch them going along, one after the other, in a living chain, from one hill, across the valley to the other, thus uniting, as it were, these two hills. A small twelve year old Motswana boy, wearing a buckskin coat, his forehead ornamented with a tuft of white feathers, which contrasted with the ebony black hair, was leading this herd of cattle. This scene, one of the finest I have seen, could well be painted by an artist.’

This twelve year old has the poise and grace of a chief at the head of his three hundred cattle that form a necklace-chain across the hills.

The Afrikaner: The white tribe of Southern Africa descended from Dutch settlers of the 16th century. Lawrence Van de Post tells how his grandfather always referred to the ‘book’ and never referred to the ‘bible’. He had a special ritual before reading. He would reverently lift the large, heavy leather covers of the book with their ivory clasps that shone like silver, and open it slowly on the first ivory pages, smooth them out with his long, brown hand, and then let them lie there exposed for a moment. The Afrikaner reminds us of the primacy of the Word of God.

When the Holy Family Sisters first went to Vleeschfontein in 1913 to investigate the feasibility of establishing a convent in such a remote area, one Sister recorded a particular moment in her diary: ‘When the children left the church they were accompanied by a woman with a radiant smile. Experiencing the radiant smile gave the sisters the reassurance they needed.’ A convent was established in Vleeschfontein in part through the power of a Motswana smile.

The Batkgatla clan, have as their totem Kgabo ya Mollo, which translates as the tip of the flame. When Kgosi Linchi converted to Christianity in 1892, it could be said that the tip of the flame, the ancient guiding light of the Bakgatla, is now infused with the light of Christ.

May each nation’s gift continue to be a light for one and each other.