Home News Stretch forth your hand to the poor” (Sir 7:32) 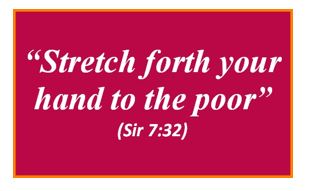 World Day of the Poor takes place each year on the 33rd Sunday of the Liturgical Calendar.   It was instigated by Pope Francis at the end of the Extraordinary Jubilee of Mercy in his Apostolic Letter, Misericordia et Misera of 20 November 2016.

The theme for this the Fourth World Day of the Poor is: “Stretch forth your hand to the poor”, inspired by the book of Sirach, it is essentially a call to act.   In his message for this 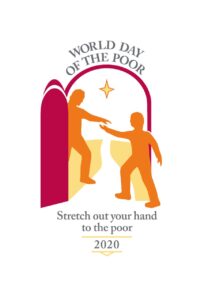 day Pope Francis speaks about the Book of Sirach as being “a precious compendium of advice on how to act…”  Pope Francis observes that “its author presents his advice concerning many concrete situations in life, one of which is poverty”. He goes on to say that “even amid hardship we must continue to trust in God.  Prayer to God and solidarity with the poor and suffering are inseparable... Time devoted to prayer can never become an alibi for neglecting our neighbour in need.  In fact the very opposite is true: the Lord’s blessing descends upon us and prayer attains its goal when accompanied by service to the poor.”   Cf. Message of pope Francis about the Fourth World Day of the Poor.

World Day of the Poor is a call to prayer accompanied by action.  For Christians it is a reminder that we have a duty to be concerned for, to care for and to act to alleviate the suffering of the poor.  A commitment to the common good, to solidarity with the poor are central to living faith and to ensuring that no one whose human dignity is violated in its basic needs will be forgotten.

The full text of Pope Francis Message for the Fourth World Day of the Poor, from which the quotations above are taken, can be accessed via the link below. It is well worth taking the time to read this short document which is down to earth, relevant to this time of pandemic and which pulls no punches in being critical of indifference, those who are greedy and those who remain unmoved by situations of poverty.

PRAYER:  Lord, Friend of the poor and the least. Those who the world despise are your favourites. Give us new eyes to see you in the sick, the elderly, those who suffer of loneliness, and those who are wounded. Give us your grace so that we may discover your living presence in all of them, welcoming and stretching forth our hand.  Amen.