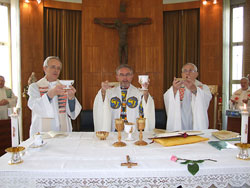 The supreme governing body in the Society of African Missions is the General Assembly.  It is made up of ex-officio members and elected members representative of the various units of the SMA. The Assembly meets every six years.

Following the 2019 SMA General Assembly, the Society of African Missions was restructured into Provinces, Districts or Delegations. Members of each unit come from several countries, seconded from their unit of origin (e.g. an Irish SMA on mission in South Africa is a seconded member of the South African Delegation as long as he is working there).

The SMA General Council, based in Rome, is made up of the Superior General, the Vicar General and General Councillors. It is elected by the General Assembly every 6 years to guide the overall administration of the Society. To access our international website, please click here.

Provinces (in order of creation)
Originally, the SMA was one unit, governed from the motherhouse in Lyon, France. In 1912, the first separate unit in the SMA was created from Lyon: Ireland.

The following Districts were created in 2019:
Central Africa
D R Congo
Kenya
Liberia
Philippines
Tanzania
Zambia
Each District is under the authority of the District Superior. He is assisted by a Council made up of a Vice-Superior and a Councillor all of who are appointed by the Superior General after consultation with the members of the District.

Delegations
The following Delegations were created in 2019:
Angola
Egypt
South Africa
Sierra Leone
Each Delegation is under the authority the Superior General who appoints a Delegation Superior and a Council after consultation with the members of the Delegation.

We also have SMA priests working in Morocco.