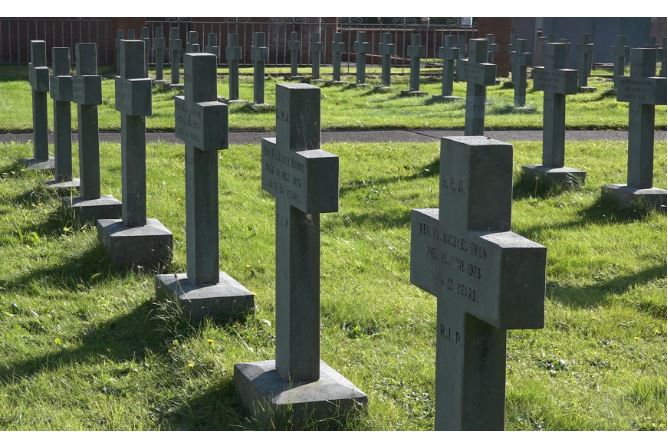 DO ye know the anti-war song The Green Fields Of France, or as it’s usually called Willie Mc Bride?

Written by Eric Bogle, it’s a classic of modern times with a timeless message proclaiming the futility of war. It outlines the horror of warfare and the killing and dying and bloodletting that’s part and parcel of conflict.  While the song is oft times butchered by less than talented singers, nevertheless it contains a profound message.

It ran through my head last Monday morning when I was in Cork city. Just the 4th day of this New Year of 2021 — a hundred years on from the bloody and bloodstained year of 1921. Yet it wasn’t thoughts of the Anglo-Irish struggle that were flitting about in my brain at all. No, I was in Cork early and had an hour to spare on the western suburbs. Because of the Covid regulations and restrictions, traffic was very light and as I parked at the Wilton Shopping centre it reminded me of the ‘Deserted Village’. In fairness, only that I had a medical appointment to attend to I’d have been at home too.

With my mask on, I thought I might go and say a quiet prayer in the SMA Church just near the shopping centre. The door was locked, it was still early. To pass away the time and with nothing better to do, I walked into the nearby cemetery. Then it came to me; that line from Bogle’s song.

As I slowly made my way through this final resting place for so many priests of the ‘Societas Missionum ad Afros’, the SMA Order, that line ‘The countless white crosses in mute witness stand’ seemed so apt. In The Green Fields Of France the author is walking through graves in a war cemetery in 1976 and that’s what inspired him to write the song. He saw the crosses on the graves as testament to ‘man’s indifference to his fellow man’.  On Monday morning last, as I walked down the main pathway of the cemetery in Wilton and then over and back across the dew-covered graves, I could only marvel at the generosity and sacrifice that the hundreds of limestone memorials represent.

The whole concept of ‘Mission’ and Missionary work fascinates and amazes me. I think any man or woman that devotes their life entirely to doing the Work of God is special. Of course, in the Bible Christ said ‘Come follow me’ — three little words — but in making them a life’s vision, occupation and way of life, people make superhuman sacrifices.

The SMA ‘order’ was founded in 1856 but it was in 1912 that the Irish ‘Province was established.  Since then hundreds and hundreds of SMA priests and OLA (Our Lady of Apostoles), sisters have gone from Ireland all over the world.
‘Converting the pagans’ was seen in the past as the role of religious clergy, but of course simply preaching the Good News is never as simple as that. The role of missionaries has been and continues to be wide and varied. We live in a very unequal world and providing education, housing, medical care and basic foodstuffs has long been part and parcel of the work of overseas Missionaries.  Going out to African countries nearly a century ago was a huge undertaking — strange diseases, tropical climates, monsoons, droughts, mosquitoes and earthquakes were just some of the things that awaited so many from Ireland.

I was saddened to see so many of the early SMA priests died so young, at 22, 24, 27 and 29 years. I read the names and ages of these brave men who truly gave their lives to a cause.

Unlike the crosses in Eric Bogle’s song, the hundreds of memorials I read on Monday last represented the very best of humankind and Christian humanity.  I really think that those SMA fathers who went to work in ‘new’ countries all those years ago made the supreme sacrifice on the double. Not alone did they give themselves freely to a noble cause, the spreading of the Gospel, but in many cases they bade farewell to parents and siblings knowing full well they might never meet again.

Maybe 15 minutes, after I had began my journey of remembrance, a lady came in the gate. She too went from grave to grave, stopping briefly at each cross and then moving on. Our paths crossed. “The Church isn’t open yet, is it?” I enquired. “No,” she said, “not ’til after the live-streamed ten o clock Mass is over — I suppose it’s a sign for us to come in here to pray?”  I agreed and we went on our paths of prayer. 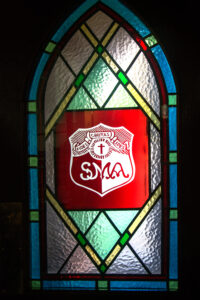 Last year was a tough and poignant one for the community here, I saw so many crosses with 2020 inscribed on them. I thought of these priests, some of who had given 60 years or more toiling on the Mission fields.

When the Church opened, volunteers were already at work, meticulously sanitizing and cleaning all the kneelers, pews, radiators, altars, doors and windows. I knelt at the back and prayed in silence.  It was crisp, frosty morn outside but a warm glow existed in the church. The January sunshine splayed through the stained glass windows, giving a beautiful hue to the inside of the building.  Just over an hour earlier, a new arrival had been born into our family in the CUH Maternity facility just across the road — a grandson, Toby James. I went to the side altar to light a few candles in thanksgiving.

I had read that on October 1 an SMA priest, Fr Pierluigi Maccalli, who had been kidnapped in Niger in 2018, had been liberated by his captors. And I prayed for him also.

There were no matches to light the candles because of the Covid regulations. One of the ladies cleaning the church asked did I want ‘a light’ and she went to the main altar and came back and lit my four candles. I thanked her and told her my ‘good news’. She was delighted and then proceeded to present me with a beautiful present.

As she handed me a beautiful set of hand-made Rosary beads, she explained they had been brought from Medjugorje recently — but they came at a price!

She asked me my name and I told her and she gave me her name.  “Now promise you’ll pray for me and I’ll pray for you, that’s the price.”

I went out into the fresh morning air. Wilton was very quiet, even the road by CUH was nearly empty. I still had time to spare. I walked up and down that tree-lined avenue in front of the church with my new beads in my hands. I prayed for all the SMA priests, those buried in the cemetery and those still active in the Order and for all Missionaries. I prayed for the new baby and parents and for all those suffering from Covid. I didn’t forget to pray for my new friend as I’d promised and last Monday, January 4th — the tenth day of Christmas — I prayed for a Happy and Safe New Year for the world.