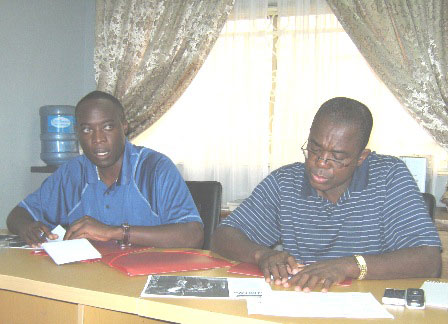 I feel greatly honoured to collaborate with the SMA in this your first seminar-workshop on Christian-Muslim relations in Africa. I believe the hope expressed at your last Plenary Council was that from this meeting you will establish and constitute a sort of Think Tank on Interreligious dialogue. I pray that will happen. I also pray that you will not be a Committee that just meets to write papers but that you will be a proactive Think Tank that will lead the SMA in Africa, and hence also the local Church in Africa, into an ever greater and more evident and effective involvement in building positive and constructive interfaith relations.

Our picture shows two of the SMA Fathers who participated in the meeting: Fr Don Phiri SMA (from Zambia, working in Liberia) and Fr Anthony Fevlo (from Ghana, working in Nigeria).

I congratulate the SMA authorities on this great initiative and hope that the SMA and the OLA will continue to collaborate in this effort at Generalate level as well as Regional/Provincial and even at grassroots level. I also commend you on the establishment of the 27th October as the annual Day of Interreligious dialogue. I hope the OLA will learn from the SMA in this regard and that, as well as collaborating with you, we will take such initiatives ourselves as a congregation.

To be a missionary and not to be dialogical is for me an oxymoron, a contradiction in itself. In fact, the document Dialogue and Mission[1] says this quite clearly and strongly: ‘Dialogue is a manner of acting, a spirit which guides ones conduct. It implies concern, respect and hospitality towards the other. It leaves room for the other person’s identity, modes of expression, values… Dialogue is thus the norm and necessary means of every form of Christian mission… Any sense of mission not permeated by such a dialogical spirit would go against the demands of true humanity and against the teachings of the Gospel.’ (DM 29)

The aim of all mission is Communion, to bring all people back into communion with God and with one another. For that Jesus came; for that – to be a sacrament (sign and instrument) of communion – the Church exists; for that the SMA was founded and for that we have given our lives as priests and religious missionaries today. We live in a world where communion is greatly lacking, and these fractures are more and more commonly and violently expressed along religious and ethnic lines. Hence our mission is all the more urgent; and it is all the more difficult.

When Msgr de Bresillac founded the SMA it was to establish a society of missionaries who would go to the most difficult situations, cross the most threatening and challenging frontiers, to those places where nobody else wanted to go, to those places where the Church (sacrament of communion) was most absent. In 1856 that was the ‘dark continent of Africa’, the ‘cursed’ land, the White Man’s grave. Great sacrifice and even moreso, great audacity was necessary. Today, crossing the frontiers into the world of the Other, especially of Muslims of whom many are afraid for various reasons, requires audacity. The frontiers others won’t cross today are rarely geographical: people go on adventure holidays to just about anywhere, and the more arduous and unexplored the better! The frontiers others won’t cross today are, rather, social, cultural and religious, particularly religious, into that world of the ‘Other’, to look at life and God in solidarity with the Other from the Other side. It is that world where few members of our local churches want to go, especially here in Africa. (True that today, particularly in the West, many cross to the Other side and become Other; the missionary, however, is called to cross over in openness and solidarity while still being aware of and true to his/herself). The recent Synod of Africa made dialogue with Muslims a priority. We who are founded to establish a local church must be pioneers in this area; helping the now vibrant Church of Africa become more authentically Church, not an Institution only but a true sacrament of Communion. On right some of the participants pictured outside the InterFaith Council Office in Abuja. Fr Basil Soyoye SMA, Superior of the Bight of Benin District-in-formation is on extreme right of the picture.

To bridge that world of the Other is dialogue and I can tell you from my own little experience that this is a lonely bridge. It is seldom understood, one is always Other even to one’s own people. I believe it is the mission ad gentes proper of today. We cross, not to convert the Other to our religion, but together, to be converted more fully towards the God of communion, of justice, of right and of peace.

Since our arrival here on Sunday evening, we have had a chance to share quite a bit, of experiences, thoughts, opinions and emotions. We have all had many experiences of living with Muslims; good experiences as well as bad experiences. As in any other circumstance of life, our bad experiences remain uppermost in our minds and have the greatest influence over our perspectives. It is good that during these days we voice these feelings and opinions honestly, that we examine them together, pray on them and reflect together on their relationship to our missionary vocation today as SMAs.

The two obvious questions to be asked, and which many people ask today, are: Is dialogue necessary? Is dialogue possible? To the first question: Is dialogue necessary, there are at least four answers: two pragmatic, two religious. Firstly, people such as many youth in Jos today or George Bush ten years ago, say no dialogue is not necessary, violent confrontation is the only answer. Or second option, pragmatists say, yes, dialogue is necessary for our survival as human beings on this planet, in this continent and in this country; violence only begets violence so we must either learn to live together as brothers/sisters or perish together as fools. The third reason we say dialogue is necessary is that we are Christians and we cannot deny the Gospel: love your neighbour as yourself; if you love only those who love you, you are no better than these others: I say love your enemy; you cannot love God whom you do not see if you do not love your brother or sister whom you see, forgive seventy times seven; blessed are the peacemakers; and so on. A fourth reason dialogue is necessary is theological: we are called to know and love God, to enter more deeply into God, the divine mystery. This we can only do in dialogue with other people of faith who through the ages have reached out to God and have heard God speak, sometimes apparently transmitting a message somewhat different to the one we have heard. In dialogue we may find that we did not fully grasp the message (Word), or we may find that we did not fully understand or adhere to the implications of living by that message, and so on.

Dialogue takes many forms: dialogue of living life together constructively and amicably on a daily basis; Dialogue of working together to build a better world: in areas of education, health, development, peace, justice, rights, and so on. Dialogue of spiritual experiences; haven’t we all some experience of sharing faith with simple Muslims, even if only around a hospital bed? And theological dialogue: important but definitely not the most important. All these forms of dialogue are happening, although of course there are difficulties.

As the underlying issues that cause conflict and tension in society increase and are not addressed and as people are polarized more and more along lines of religious identity, the conflicts are expressed more and more violently and hence all these forms of dialogue become more and more difficult. But simultaneously they become more and more urgent. Can we as SMA hep to identify and confront these underlying causes of conflict, so as to overcome those difficulties that are an obstacle to more sincere and constructive dialogue? Should we at least try to do so? Why? Can we be true to our charism if we don’t? And if we want to be, How can we do so?

That is why we are here these days: To discuss these questions, voice all our concerns, identify the greatest obstacles, and hopefully, be ‘converted’ and committed as an SMA team in Africa to this most demanding and urgent area of mission ad gentes today.

Again, thanks for being here, thanks for inviting me and I pray we will have a spirit-filled and fruitful few days together.

[1] The Attitude of the Church toward the Followers of Other Religions. Reflections and Orientations on Dialogue and Mission, Secretariat for Relations with Non-Christians, 1984.