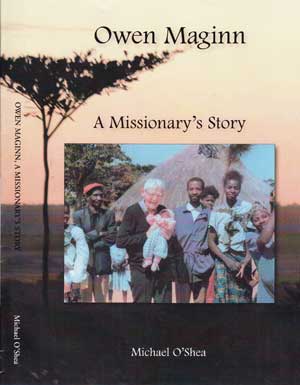 was launched in Castlewellan, Co Down on Thursday 20 August.

The Launch was performed by Fr John Dunne SMA, Vice-Provincial.  The book describes the life and times of veteran SMA Missionary Fr Owen Maginn who died in 2006.  It is published by the Society of African Missions and printed by Shanway Press, Belfast.

The author, Fr Michael O’Shea SMA, teaches Church History and English at St Augustine’s Seminary, Mpima which is the national Seminary of Zambia.  Previous publications include: Missionaries and Miners, Mission or Martyrdom and Bishop Kelly of Western Nigeria.

PREVIEW OF THE BOOK

With ancestral kin ranging from substantial landowners to notable clerics, the Maginns of Kilcoo, though dispossessed of their lands, can claim to be a family which has left its mark at home and abroad. More recent forebears, can count among their ranks important business people, millers, numerous parish priests, and owners of a fifteenth century castle.

Owen Maginn was born to Mark and Annie, farmer and school teacher, in Drumaroad, Co Down, in 1920.  In 1923, in straitened circumstances owing to the fall in sales of flax and potatoes after World War I, Mark took Annie and Owen across the Atlantic to seek their fortune in America.  Owen spent his childhood until the age of nine in the booming automobile making city of Detroit where Mark was an employee of Henry Ford, and Annie ran a boarding house.  There, Owen’s brother Tom was born.  All went well until the Wall Street crash of 1929, which was followed by world wide recession and terrible poverty.  Out of work, Mark sent his little family home to Ireland while he hung on in the hope that things would improve.

Having begun primary schooling in Detroit, Owen completed it in Drumaroad and, in 1934, became one of the first pupils in the new secondary school opened by the De la Salle Brothers in Downpatrick.  In 1938, he entered the African Missions novitiate in Galway, studied theology in Dromantine, Co Down and was ordained in Newry in
December 1943.  The following year he and a classmate were sent to Cambridge University, the first SMA priests to be sent there.

The background of the earlier part of his life was composed of two major world-shaking events: the Recession of the Thirties and World War II.  While these did not greatly interfere with his personal development, a personal tragedy in 1946 did.  After his second year in Cambridge, he contracted the dreaded disease of tuberculosis which laid him low for the next four years.  Surviving this and, later, a major operation which removed two thirds of his stomach, he returned to Cambridge to finish his degree – an MA in history.  His lung and stomach problems continued to trouble him sporadically throughout his life but, never giving in to them, he lived a life of hard-work and loving service especially in Africa.

In 1951 he received his first mission appointment, Egypt. Teacher and dean in St George’s College,Heliopolis, he lived through the Nasser era, the Suez War, Islamisation, and the Yom Kippur war of 1973.

The last of the Irish SMA Fathers in St George’s, it fell to him to negotiate transfer of ownership of the school to the Coptic Patriarch.  He remained on a voluntary basis to teach English and help the new Coptic Fathers run the school.   In between his two major tours in Egypt, he worked for seven years at home in Dromantine seminary as professor of Church History, dean of students and spiritual director and for short time as acting  superior of the Society’s novitiate in Galway.

From 1971, he was the only Irish SMA Father in Egypt and, especially after the Yom Kippur War of 1973, felt increasing dissatisfaction with his isolation and lack of  missionary or priestly ministerial possibilities.  In 1974, he thought of doing a ‘sabbatical’ in a new SMA mission in East Africa, Zambia. The ‘sabbatical’ in Zambia lasted over 30 years until a stroke forced him to retire in 2005.

Owen died at eighty-six years of age, a year after leaving Zambia.  He was not a bishop, founder, ‘major superior’, martyr, notorious villain or saint — the kind of people who are more often the subjects of biographies.  He was an ‘ordinary’ African Missionary, one who was ‘extraordinary’ in his ordinariness.  His ‘human-ness’, sense of humour, modest achievements, and the fascinating times he lived through, make his story worth telling.  His story is also the story of Drumaroad, of Detroit in the Twenties, of SMA formation in an age gone by, and the story of the Irish mission in Egypt and its mission in Zambia.

25 June 2009
[the 150th anniversary of the death of the Founder of the African Missions Society, Mgr Melchior de Marion Bresillac]