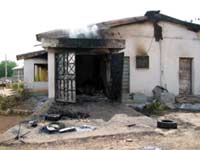 It was Thursday 23rd February. The main thing on my mind that day was the arrival of the Service Leaders from the outlying communities of the parish, coming for a mini workshop that evening and staying until midday on Friday.

The day was spent making the preparations: arranging the collection of money from the bank, the purchase of foodstuff and firewood, getting local women to cook. By 7 o’clock in the evening some of the participants had gathered and the cooks were already hard at work with their cooking pots. By 8 o’clock Catechist John Bato had begun the workshop with his own input. At 8.30 I visited the group, agreed on a programme for that evening and the following morning. The plan was for John to continue his input after which they would have their meal and then come to the Mission House for a video.

It was nearly 10 o’clock and I had already wheeled out my television to the veranda and had all set up in readiness to show the video. I decided to make one further trip to the far end of the compound where I found John Bato answering questions from the floor. Without entering I left them and headed back to the house. On the way I noticed that the main gate to the compound was still open and had an uneasy feeling about that. I went directly to the gateman who was already asleep and asked him to close the gate. He said that he hadn’t closed it because two of the mission staff had gone out and were yet to return.

On entering my house there was a call from one of the Notre-Dame sisters (SND) across the road telling me to close that gate and the words she spoke shook me: ‘may God help us through this night’. I tried to reassure her that nothing was going to happen. After all in worst periods of rioting in other cities nothing ever happened in Kontagora. I went back out again to make sure the gate was closed.

By now it was about 10.10 pm. It was then that I heard the ominous din of shouting coming from the direction of the town. I became alarmed. But I was still refusing to accept that anything could happen in Kontagora. By now the Leaders were gathering for their video show. The schoolchildren boarding in the compound had also gathered. Everyone was listening in silence and fear was palpable as we heard the mob come nearer to the compound. A group chanting passed by the gate after hitting it a few times. The sequence of events from then on are blurred in my memory.

I remember being told that the children’s hostel was on fire. When I went to investigate I found that the gang outside on the road had thrown a burning tyre over the wall. It was burning and had set alight the dried grass all around. My fear was that the fire might get near to the store where there might have been some petrol kept. I grabbed a piece of firewood that had been brought earlier in the day and began beating the fire with it calling on others to come and help. Immediately rocks began to rain down on us from over the wall and we abandoned that fire. Going back to the house the banging on the gate became louder and more determined. I directed everyone to leave for the next compound, pushed the television cupboard inside the house and locked the door. Fr Frank McGrath said: “they will burn the house… get your passport”. I hurried to my room and almost left without it. The passport was not in the place where I usually keep it and after a panic-stricken search in the dark I discovered it and fled out the door. At this juncture the rioters had burst through the gate and were already setting fire to the church. The last of us passed through to the second compound probably at about 10.30 pm.

At the far wall of that compound, in which there are a number of buildings belonging to the Vicariate, we, Fr Frank, Sr Josephine Enemo OLA and myself squatted down behind a heap of cement blocks and listened to the activity going on in the compound we had just left. We knew the church had been set alight and later could see fire starting in the mission house. After some time I suddenly noticed some figures running towards us in the semi-darkness. One alighted the blocks behind which we were hiding, paused to stare down at us and then continued on his way over the wall. Some of his mates pulled themselves over the wall further along. “That was close”, I thought to myself. The next while was spent watching the fire gain momentum in the mission house. There was a dramatic moment when a large gas cylinder exploded with a loud bang and huge ball of fire rising up from the house. The time came eventually when Benjamin, the security man came to tell us the coast was clear and we should go and see what could be saved.

The first thing to be rescued was my pick-up which was parked in the lean-to car shelter alongside two other vehicles which were already ablaze. The shelter itself was also on fire. Attention was then focussed on the rooms of the mission house that the fire had not yet reached. With the help of those who had remained on in the compound during the attack we salvaged as much as possible of the contents of those rooms. My own room was the nearest to the fire and due to the density of the smoke there it was difficult to see and to endure it for more than a matter of seconds thereby enabling us to retrieve only a minimum of property from the room. Having salvaged all we could from the house we then entered the church to find a few isolated fires burning but most of the benches were still intact. We did what we could to isolate the fires making a space between the good benches and the burning ones. The church was going to be only minor damage. Standing out side it looked as if we were standing in the middle of a ‘ring of fire’. As we stood facing the blazing house there were two vehicles ablaze to the right and two to the left. Behind us there was the church . Further back there was the three school buses of St Michael’s Nursery/Primary School already gutted.

By now it was after 2.00 am and with some mattresses we had saved we decided to lie down on the verandah of a house in the second compound where we had hidden. After a short while we noticed a fire beginning to spread through the neighbouring Living Faith Church just over the wall. It soon developed into a spectacular inferno that both fascinated and filled us onlookers with apprehension. As the flames were subsiding we heard agitated voices indicating that the arsonists were still around close by. We did not feel safe in this spot. So, at 3.00 am, Frank, Sr Josephine, John Bato and myself dragged our mattresses back into the burning compound, past the fires to the very lower end of it. There we rested and spent the next four sleepless hours waiting for daybreak to come. With the arrival of daybreak we were able to see more clearly the extent of the destruction. People began coming to sympathise and view the spectacle.

Later in the day the sad news emerged that that one of our Leaders, Joseph Ibrahim, who had come for the workshop lost his life in the fire in the neighbouring church which we watched at 3.00 am. I buried his charred remains at about 3.00 pm on Friday 24th in the town cemetery. May his soul rest in peace.