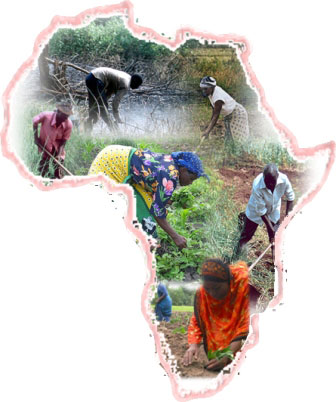 LAND LEASE – A CAUSE FOR CONCERN IN AFRICA Eager land investors emphasise the benefits of higher crop yields, employment and infrastructural development while African Governments, anxious to secure these benefits, welcome investment.  Opposition views range from suspicion to a belief that land lease is a “neo-colonial rip-off”.  A report by the International Food Policy Research Institute (IFPRI) sums up the main reason for opposition. “Unequal power relations in land acquisition deals can put the livelihoods of the poor at risk.  Since the state often formally owns the land, the poor run the risk of being pushed off in favour of the investor, without consultation or compensation.”  Often it is the local elite who benefit while poor people end up worse-off as access to land previously farmed or available for grazing, firewood and water supply is denied.

Host governments usually claim the land they offer is state-owned.  In law this may technically be true but de facto customary rights of occupancy have been recognised for generations. In foreign-investment deals these rights are ignored and villagers evicted. This injustice breeds a potential for conflict. Secrecy regarding the terms, the corruption of local officials and the exclusion of local involvement add to resentment.

Madagascar
Anger over a deal involving the lease of 1.3 million hectares to the Korean Conglomerate Daewoo Logistics contributed to riots and the subsequent overthrow of the Government in Madagascar. Many observers believe that similar conflicts are inevitable in other African countries.

Second Special Assembly of the Synod of Bishops for Africa
A submission to the recent African Synod of Bishops criticised the secrecy surrounding land lease and emphasised the need for public involvement and debate on the issue of leasing land to foreign investors.

“If the Church is serious about being the voice of the poor, it must bring this hidden agenda out into public discussion and defend the land rights of traditional communities against corrupt leaders and greedy investors.”

The present form of land lease in Africa contradicts Catholic Social principles in many ways. Local communities are often not involved in decisions regarding land, produce is mainly for export and there are real concerns about the long term environmental effects of industrial scale land lease farms.

There is also concern about the effect that the potential for political instability in many African countries will have on investors. Will they show due care for local environments and economies? Or will the temptation to profit as much as possible as quickly as possible be overwhelming? How these questions are answered will ultimately determine whether or not land lease is a neo-colonial land-grab or an investment beneficial to Africans.

It is not yet possible to gauge the long term impact that land lease will have. Not enough time has passed for promised benefits to materialise. However, up to now the balance is tipped in favour of a negative view.  For the moment, the jury is out and judgement deferred.  One commentator has prudently said that “a watchful, hopeful but wary eye on needs to be kept on the progress of land lease in Africa”. Biofuels can be made from food crops such as Maize, Sugar Cane and Palm Oil but it is the “wonder plant” Jatropha (pictured) that countries like Ghana, Angola, Ethiopia and Tanzania are rushing to cultivate. Its attraction is that it can grow on arid land not suitable for food crops.

In Tanzania, where Irish SMA’s work, land lease for biofuel crops is causing problems. Investment was suspended in 2009 following unrest over the eviction of farmers and the conversion of food growing land to biofuel crops. In addition  diverting water to irrigate these crops has caused shortages in  part of he capital Dar es Salaam. There is also evidence of shady dealing with villagers being paid less than $10 a hectare for farmland.  Local people are losing out and measures to deal with the effects of land clearance and pesticide use are not in place. As a result long term environmental degradation and negative effects on health are problems that are being stored up for the future.

This situation exemplifies the effects that a lack of policy on land use is having in African countries. In response, Tanzania’s government aims to publish national guidelines for biofuel investment this year.  It is also very aware that these may not be enough and that protecting the environment and people’s rights requires laws, and enforcement.  Even though this is a small start, it is a move in the right direction that is far ahead of other African countries.