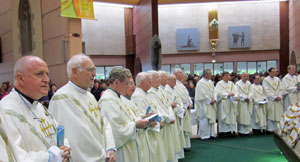 The 31st SMA Pilgrimage to Our Lady’s Shrine at Knock took place, as usual, on the fourth Saturday of May. Though the sun didn’t shine the day was dry, if a bit cold! More than 2,000 SMA supporters as well as SMA priests and family members gathered for the final day of the SMA National Novena in honour of Our Lady.

Our picture shows some of the Concelebrating priests during the Mass, with Frs Aodhán McCrystal and John Travers nearest the camera.

Pilgrims came from the four corners of Ireland and further afield. Fr Damian Bresnahan and the five FVC Directors (Frs John Bowe, Lee Cahill, Brendan Dunning, Tommy Faherty and Sean Hayes) put a lot of effort into the preparations for the Pilgrimage and it was wonderful to see so many of our FVC members arriving in Coaches, Minibuses and cars. An event not to be missed next year. From early morning until just before the 3pm Mass many pilgrims took time out to celebrate the Sacrament of Reconciliation in the Confession Chapel (pictured). Many SMA priests took turns to hear Confessions throughout the day, adding to the regular Confessors who provide this service every day to the many thousands who come to Knock every day of the year.

More than 50 SMA priests gathered with the pilgrims for the Concelebrated Mass and Anointing of the Sick at 3pm. The Principal Celebrant was the Irish Provincial Leader, Fr Fachtna O’Driscoll SMA. A special guest was the Emeritus Bishop of Paisley, Rt Rev John Mone who was leading a group of Scottish pilgrims to Knock.

In his homily, Fr Fachtna recounted a story of a Protestant missionary doctor who worked for some years in Africa. One of the lessons of the story is that, most of the time, missionaries are recipients of the Good News from the people we are sent to. And this is true of our work, not just in Africa but also our experience here at home with the huge band of supporters the SMA has throughout Ireland. Fr Fachtna stated: “Many of you support us and other missionaries through the FVC, Mass Association Cards, Mission Boxes, Parishes, Friends of Africa, SMALA, Novenas. Those who work with you directly frequently tell me how humbled they are by your faith; and not only humbled but inspired too.

You reflect something of the faith of Mary. You don’t put on a big demonstration of faith but “you treasure these things and ponder them in your hearts”. Without your faith, without your prayer support and without your financial support our work would cease. We just cannot do it without you.

This is summed up beautifully in the second reading of today’s Mass. We collaborate in this work because, as St Paul puts it to the Corinthians: “though there are many of us, we form a single body because we all share in this one loaf”. We form one single body, each of us having our own role to play.”

In speaking about the beauty of Mission, Fr Fachtna also acknowledged the reality highlighted by the recent RTE Primetime programme, of a shadow side to the work of mission. He stated that it would be wrong to gather in Knock and not acknowledge that some have abused their position of power and dominance and have abused African children. But it is also important to acknowledge, he continued, that missionaries have done and continue to do wonderful work in Africa.

Fr Fachtna expressed gratitude to all our SMA supporters, those participating in the Pilgrimage, and those all over the country without whose support we could not do our work.

Among the Concelebrating priests were some of our missionaries, home on leave from Africa – Fr Pauric Kelly (from Cornamona, Co Galway, on mission in Zambia), Fr P J Kelly (Laurencetown, Tanzania), Fr Billy Sheridan (Newport, Co Mayo, Nigeria) and Fr Aodhán McCrystal (Dromore, Co Tyrone who is the Guestmaster at the SMA Regional House in Nairobi, Kenya).

Fr Edward Muge SMA, from Nigeria was among the principal concelebrants. Fr Muge has just completed post-graduate Studies in Milltown, Dublin and is returning tro Nigeria shortly to be part of the team there responsible for training our SMA seminarians. For the past few weeks Fr Muge was working in Knock, assisting with the celebration of Masses and hearing Confessions.

A friend of the SMA, Ramelo Gregorio  (from the Philippines) led the singing at the Mass, assisted by Marie Campbell at the Organ.

During the Mass, the Rite of Anointing of the Sick was celebrated for those who came forward for it. The Missionary Sisters of Our Lady of Apostles (OLA) and St Louis Sisters, who work in many parts of Nigeria, alongside the SMA missionaries, also participated in the Pilgrimage. It was a wonderful opportunity for remembering their shared missionary service. Mercy Sisters also joined with us as did a Scottish group led by Bishop John Mone, emeritus bishop of Paisley.

The Offertory Procession was a little different to what we normally see in Church. A group of dancers from the Moffatt School of Irish Dancing in nearby Crossmolina danced in praise of the Lord. Each of the 32 dancers wore a jersey representing a particular Irish county, which symbolises the national dimension of our annual SMA pilgrimage – our supporters come from every Irish county. The African tapestries used in the Offertory dance symbolise the African countries where our missionaries work.

Fr Liam Brady SMA, home on holidays from South Africa, accompanied them on the Accordian.

In small groups they carried the gifts to the Altar, including the Altar Bread and Wine for the Mass. At the conclusion of the presentation of gifts the different groups danced through the Basilica ‘chapels’ passing underneath some African Tapestries held above their heads. Their dancing was greatly appreciated by all at the Mass and brought a spontaneous round of applause from the congregation.

Holy Communion was brought to the congregation by the concelebrating priests who moved through the different chapels to those who wanted to receive.

Mgr Joseph Quinn thanked all the pilgrims for their attendance at the National Shrine in honour of Our Lady. In particular he thanked Fr Bresnahan and his team for their organisation as well as Ramelo for his leading of the singing. It was a tribute to him that the entire congregation joined in singing the different hymns and parts of the Mass.