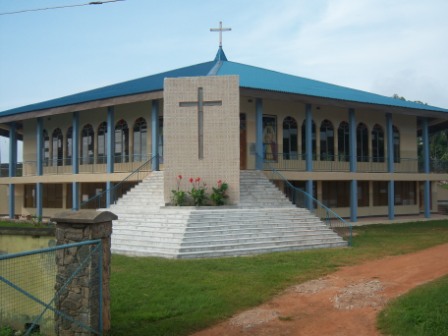 Fr Fintan Daly SMA was the Principal Celebrant, assisted by ten priests, at a Memorial Mass in St Leo’s Catholic Church, Orita-Challenge, Ibadan, Nigeria to pray for the happy repose of the souls of Father Patrick Whelan SMA and Father Michael Cahill SMA, both of whom had ministered in St Leo’s. Many Religious Sisters, representing the OLA Sisters, Medical Missionaries of Mary and the Sisters of Charity, attended the Mass which took place on Monday, 20 February 2012. A large number of parishioners also attended, despite the short notice given.

My dear friends I welcome you all to this Mass and I thank you for coming. We are here to remember two dedicated and long serving missionaries.

A Requiem Mass is not a time to give a detailed account of the life of the person who died, but some of you may like to know something about these two priests, so I will say a few words about them. I knew them very well. I could say I was a school mate of both of them though at different times and different places. I attended the same secondary School as Fr. Cahill. The School was a Day School run by the De La Salle Brothers. I am happy to see Br. Fred here. He is a De La Salle Brother who has worked for more than 50 years in Ondo. The De La Salle Brothers have done wonders for education in many parts of the world.  Michel Cahill cycled ten miles from the west to De La Salle College every day and I cycled ten miles from the east to the school.  We did this every day, in rain or snow or sunshine.  Of course he was my senior by a few years and his decision to join the SMA probably influenced me to do the same a few years later.

I was also a student with Fr. Whelan – we were at University College Cork together, from 1958 – 1961 though Fr. Whelan was a priest then but I was still a seminarian.

Fr. Whelan and Fr. Cahill had much in common. They were both born in Co. Galway in the west of Ireland. Both belonged to large families, and both were very religious families. Two of Fr. Whelan’s sisters were Rev. Sisters and two of Fr. Cahill’s sisters were also Rev. Sisters.  Fr. Cahill also had two cousins who were OLA Sisters and both worked in Ibadan. They were Sr. Mary Cahill who was once the Matron of Oluyoro Hospital and Sr. Eileen Cummins who taught at St. Teresa’s College and was later OLA Superior General. Fr. Cahill had another cousin who was ordained with him on the same day, Fr John Haverty SMA who is still working in Northern Nigeria. Fr. Whelan was ordained in 1956 and after he graduated in science in 1961 he was appointed to Ondo Diocese and worked there almost continuously till 1996.  He taught science at Sacred Heart Seminary and later at Aquinas College and also at Stella Maris College Okitipupa. As well as being a dedicated teacher he was a great footballer.  He had already won a Cup Final with University College Cork in 1961. I was at that final and was amazed that Fr. Whelan who was a fairly small man, could jump so high for the ball. In the schools in Ondo he was a great coach both in football and athletics. Due to his coaching many of his students won medals.

When he retired from teaching he gave dedicated service as Parish Priest at Ore. In 1997 he was transferred to Ibadan and was parish priest here at St. Leo’s for three years. By that time his health was failing and he did not have the wonderful energy he had in earlier years. In 2000 he went to Ireland for medical treatment and was in and out of hospital until the time of his death.  But in spite of that he managed to do his work as bursar at the SMA House in Claregalway until a short time before he died.

As well as his love for sport he also had a great love for nature and had a great knowledge of birds, of their songs and their habits. One of those who was with him when he died said, “it was fitting that he  who loved birds, should die in the early morning as the birds were beginning to sing on the tree outside the hospital window. Fr. Cahill was ordained in 1961 and was also appointed to Ondo and arrived there in 1962 and worked there in the Parishes of Owo, Okitipupo, Irele and Ondo – where he was made a chief. He was elected Deputy Regional Superior of the SMA in 1989 and remained in that post until 1995. During these years he was also Parish Priest here at St. Leo’s and it was chiefly through his efforts that the outstations of Good Shepherd, St. Anthony’s and St. Charles Lwanga were opened. Many members of the parish here remember him not only for his dedicated work in the Parish, but also for sense of humour and the way he delighted in starting an argument which were never intended to be serious.

In 1995 he was transferred to Holy Family Parish in Ilorin to start a new SMA Parish. He not only developed the central station but opened a number of Outstations.

In 2002 while in Ireland on vacation he was knocked down by a motor cycle as a result of which he had to have a leg amputated and had prosthesis. He made the best of his new situation and worked in the SMA Promotion Office. He took great interest in this work because, earlier during a break from his work in Ondo, he had travelled much of Ireland doing promotion for the SMA. But now his work was confined to the House. He got a motor wheel chair and used to go along the corridors of the house with great speed and got delight in swerving past any one he met. But when he had just about adapted himself to the effects of amputation he got cancer and had painful chemo treatment and for the rest of his life he suffered much, but in spite of that he was always cheerful and was always interested in Nigeria and what was happening in Ondo and Ibadan and Ilorin. Last year he celebrated the Golden Jubilee of his ordination with 12 of his classmates. All of them spoke highly of him and how his cheerfulness in spite of his suffering was an inspiration to all of them.

So Fr. Whelan and Fr. Cahill spent nearly 10 years each in poor health and in much suffering. Some people may say it was a pity that these two talented and dedicated priests were ill for so many years when they could be out doing pastoral work. And the question is often asked why all this sickness and suffering?  Why does God allow it?  We cannot answer that question but we can say for sure that God does not cause sickness or suffering, but God can bring good out of it. In the early centuries, the Christians used to say, “the blood of martyrs is the seed of Christians”. Because of the long illness and the much suffering of Fr. Cahill, he could be compared to a martyr, so we can be confident that the long illness and much suffering of these two priests will inspire greater zeal for evangelization among many people.

Rest is good, but someone may say eternal rest would be too much, it would be boring. But there is no danger of being bored in heaven. Here on earth we all love beautiful things, beautiful places and beautiful people. But all the beauty in this world is only a small reflection of the beauty and the glory and the wonder of God who is Father, Son and Holy Spirit. So each new day in heaven will be like a new adventure, a new opportunity to explore the wonder and the beauty and glory of God which is far more wonderful than anything we ever thought of. That is why St. Paul said, “No eye has seen, and no ear heard, neither has it entered into the heart of man what things God has prepared for those who love him”.

That is the life we pray that Fr. Whelan and Fr. Cahill will now enjoy, and that is the life to which we are all called to, and the death of these two priests is a reminder to us to prepare for heaven which is our true home. St. John tells us in his first letter that in heaven we shall become like Jesus because we shall see him as he really is. So the best way to prepare for heaven is to try to see Jesus now in the many ways he is present in the world.

“I see his blood upon the rose. I see his face in every flower”.

But most of all we will see Jesus in the Eucharist and hear his voice as we read the Scriptures.

As we celebrate the Eucharist this evening we remember the great love that Fr. Whelan and Fr. Cahill had for the Eucharist. In Ireland centuries ago Catholics were persecuted. Catholics could be jailed or even executed for attending Mass and they were offered financial awards if they attended a protestant service. But most of the Catholics remained faithful. Their motto was, “It is the Mass that matters”.

For Fr. Whelan and Fr. Cahill, it was also ‘The Mass that mattered’. May we all be faithful to the Mass and may we be absolutely convinced that at Mass we not only meet Jesus but that Jesus comes to live in us, to be our guest, our friend and our nourishment. And the Mass prepares us to meet the Lord because at every Mass before Communion we say, “We wait in joyful hope for the coming of our Saviour Jesus Christ.” If we are prepared to joyfully receive Christ in the Eucharist, we can be confident that we will be ready to meet him when we leave this world.

Frs. Cahill and Whelan have left this world. We confidently recommend them to the Lord whom they faithfully served.  May they rest in peace and may God bless you all.