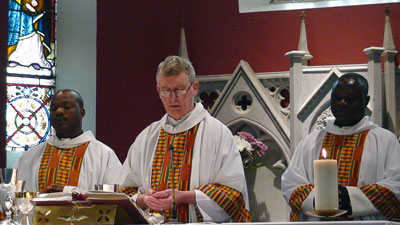 In his opening remarks Fr O’Driscoll welcomed the Nigerian Ambassador to Ireland, H E Dr Kemafo Chikwe, Mr John Kennedy from the Office of the Executive President of the Federal Republic of Nigeria, the Irish Ambassador to Nigeria, My Kyle O’Sullivan. Fr O’Driscoll also welcomed the many priests, brothers and Sisters from many Congregations who knew Bishop John, had worked with him in Jos and latterly in Bauchi. The wider Moore family attended with many coming from all over the country to say Goodbye to a beloved brother, brother-in-law, uncle, cousin and friend.

Fr O’Driscoll read out letters received from the Apostolic Nuncio to Ireland, Most Rev De Giuseppe Leanza, transmitted through the Bishop of Cork & Ross, Rt Rev John Buckley and a letter from the Chargé d’Affaires at the Apostolic Nunciature in Abuja, Nigeria conveying the sympathy of His Holiness Pope Benedict XVI.

SMA, Augustinian and Kiltegan priests as well as eleven Nigerian priests concelebrated. The presence of the latter added to the liturgy with their singing in Hausa at various times during the Mass. In his homily Fr O’Driscoll recalled the opening lines in the first reading (Isaiah 52) “How beautiful on the mountains are the feet of one who brings good news, who heralds peace, brings happiness, proclaims salvation, and tells Zion, ‘Your God is king!.  These are almost word pictures of John the missionary. One can almost see him bounding over land in his typical exuberant style to preach the gospel in season and out of season.  …  He had a great grasp of the Hausa language and could engage in sustained banter with people in Fulani and  other languages of the lowlands. Nelson Mandela once said “if you speak to a man in a language he understands you get through to his head; but if you speak to him in his own language you get through to his heart”. John understood this instinctively because he had such a big heart himself and it is because of this heart connection that the people among whom he lived and worked in Nigeria are devastated at his untimely death.” Read the full homily here.

Brother Jim Redmond SMA played the Organ for the Mass and the singing was led by Fr Angelo Lafferty SMA.

At the end of the Mass Father Fergus Tuohy SMA spoke of the shock in Bauchi diocese at the death of Bishop John. He and Fr Paul Gokok represented the grieving faithful there.

The Episcopal Cross given to Bishop John at the time of his appointment as Bishop of Bauchi, along with a photograph of his Installation were placed on the coffin by Fr Gokok. They were later presented to the family as a memento of a dearly beloved pastor.

In a moving moment during the Mass the request of Bishop Moore’s Cook in Bauchi, Emmanuel, that a rose be placed on the coffin was carried out by Fr Gokok. It symbolised the deep love which all his staff had for ‘our bishop’.

Mr John Kennedy also addressed the congregation reminding them of the fatherly love he and his family experienced during their lives. At the time of family illness they were supported by the prayers of the bishop and for that they will always be grateful. Mr Kennedy arrived from Nigeria last night and was returning this evening.

Bishop John Moore SMA was laid to rest alongside his brothers SMA’s – brothers, priests and bishops in the adjoining SMA community cemetery to await the Day of the Resurrection. Fr Andrew Batare led the large congregation in reciting the First Glorious Mystery of the Rosary, the Resurrection, for the happy repose of the soul of John Moore SMA