Fr Owen McKenna died peacefully on Monday, 2 May 2022, in the Bon Secours Hospital, Cork. His Funeral Mass took place at St Joseph’s SMA Church, Wilton, Cork on Thursday, 5 May with the SMA Provincial Leader, Fr Malachy Flanagan, as the Principal Celebrant and a number of other SMA priests concelebrating, including a number of classmates.

Ms Niamh Roe was the Organist / Soloist and Fr Colum O’Shea SMA was the MC. The following is an edited version of Fr Joe’s homily.

In the second reading of today’s Mass, an extract from St Paul’s Letter to the Romans, that great missionary provides us with the raison d’être of the missionary calling. Faith comes from what is preached, and what is preached comes from the word of Christ; but people will not believe in Christ unless they get a preacher, and they will never have a preacher unless one is sent, so that the footsteps of those who bring good news are truly a welcome sound. In a world where there is more than enough bad news to cope with, the bearers of good news are always welcome.

While Paul’s reflections on the missionary ideal are of immense importance, they also have to be counterbalanced by the realism that is evident in his other writings about his actual missionary experiences. In his second letter to the Corinthians, for example, he outlines some of the travails he endures in the service of the Gospel: floggings and beatings and imprisonment; dangers facing him in open countryside and at sea; threats posed by brigands and even by his own people; hunger and thirst and, on top of everything else, his anxiety and worry arising from the responsibilities he has to the communities he established. In reflecting on Paul the missionary, then, both these aspects must be taken into account – his idealism, on the one hand, and the difficulties he experienced while trying to live the vision, on the other.

Paul’s idealism and realism are worth recalling today as we mark the passing from this life of one who was a missionary to the depths of his heart and who sought to live by the same values in contemporary times. Though the world has changed enormously over the 2,000 years or so since Paul lived and wrote, the struggle for each of us to practise what we preach, to translate our idealistic vison and values into the experiences of daily life remains as challenging as ever. Just as with every aspect of Christian life, that is also true of the missionary life, as I and other SMAs know only too well from experience.

Back in 1980, five newly-ordained SMA priests – yours truly included – went to Nigeria with an idealism reflective of St Paul in the first reading. It wasn’t long before that idealism was tested by the harsh reality of experience when we found ourselves in rather spartan conditions struggling to learn the local language in what was then a fairly isolated location. There our eyes were gradually opened to a very different way of life from what we had grown accustomed to here in Ireland. In that new context, every encounter was an eye-opener and even the smallest chore was both an adventure and a huge struggle because of the sweat that had to be expended even when doing absolutely nothing in the tropical humidity and heat. There was the hassle, the red tape of every sort when dealing with officialdom, and the wrangling and bartering that were routine in the marketplace and almost a precondition for encountering others in any sort of pastoral way. And, of course, there was no shortage of health issues; for having been vaccinated to the hilt before leaving Ireland and alerted to the ever-present threat posed by malaria, we were only too well aware that every fly might be a mosquito in disguise, while any creature crawling on the ground might be a scorpion or snake in search of a tasty snack. In those circumstances, it was easy for one’s imagination to run wild, racing between ‘culture shock’, on the one side, and hypochondria, on the other. Any yet, in spite of everything, it’s fair to say that we enjoyed practically every minute of the experience, for two reasons basically: the camaraderie, sense of care and solidarity made possible by the priests and sisters (St Louis Sisters in Ondo and Ekiti, OLA Sisters elsewhere) who welcomed us, and the extraordinary hospitality and zest for life of the Nigerian people, mostly Yoruba, with whom we worked.

Looking back on those days now from a vantage point four decades on brings a certain nostalgia for the innocence and simplicity of it all. Looking back also brings a heightened sense of the dramatic nature of much of what unfolded; for dramatic it certainly was, at times even Shakespearean in scope, as crisis precipitated crisis and events unfolded both locally and nationally on the vast stage of Nigerian life in a manner that showed how insular our lives really had been up to then. For us neophytes making our entrance, stage-fright was always a danger and humility in the face of it was the most appropriate option. In that context, it was providential that one of our guides, one of the central actors in the drama in which we found ourselves, was a McKenna.

Back in 1980, Owen McKenna was one of the larger-than-life missionaries who welcomed us with open arms into the Diocese of Ekiti as we struggled to come to terms with our new surroundings and all the challenges it posed. By that stage, Owen was an old hand, having been in Nigeria since 1962, when he had undertaken a similar process of initiation into African life. In the years since then, he had worked in parishes and schools across the dioceses of Ondo and Ekiti, making a significant contribution to the growth of the church and the education of the young in so doing. In all his work, his preference was to be on the margins, for there he seemed to be most at home; though one qualification should be added – for a time, along with some others, he had to bear a title more reflective of the ecclesiastical establishment: Canon Owen.

Physically imposing but also sensitive to the needs and vulnerabilities of others, his heart was as big as they come, and being a McKenna, it was no surprise that he had a powerful sense of playfulness, equipping him with a repertoire of tricks and a flair for the dramatic. He was extremely generous, making us feel at home when we longed be elsewhere. With his warm-hearted hospitality, he helped us find our feet in situations where life at times was difficult and stressful; and with light-hearted humour, he encouraged us and made us feel at ease, combining pastoral sensitivity in his relationships with practical know-how as he put his love for gadgets to good use in a context where repairing things and recycling were the order of the day; for, in a context of widespread poverty and need, nothing was ever wasted – though sometimes we would have preferred otherwise when observing a rather dodgy-looking vehicle speeding towards us along the laterite roads which abounded in the region. Navigating that terrain even in a perfectly functioning car could be dangerous at times; that had become quite clear in 1976, just a few years previously, with the loss in a car accident of one young SMA, Michael Brennan, with whom we had lived as students. His death weighed heavily on Owen, and so we hope and pray that their reunion – along with all those from that era who are no longer with us – will add to the rejoicing in heaven this day.

A major change of scene occurred in Owen’s life in 1985 when he returned to this side of the world. Over the intervening decades, Ireland had changed too, and finding his feet in the changed landscape had its challenges. Owen’s rich missionary experience was invaluable in the pastoral situations in which he now found himself: first in the SMA Parishes at Wilton and Blackrock Road and then eventually in Dublin where he came to reside in 2003 and where he served as Bursar for many years. In acknowledging his contribution during those years, his work as Chaplain to the Scouts in Cork should be mentioned, while in Dublin, it is appropriate to signal his commitment to the Dominican Sisters at Muckross Convent in Donnybrook, and to the faithful community that gathered in the chapel at Dunnes Cornelscourt, up to the time Covid-19 struck. Of course, always in the background were his family, to whom he was keenly devoted and, apart from when unavoidably absent – most recently because of the pandemic restrictions – he was at most of the special occasions in their lives – baptisms and weddings, anniversaries and funerals. 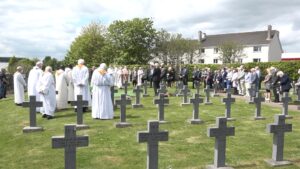 A journey that began here in Cork 86 years ago comes to an end today as we lay Owen to rest. That journey was incredibly rich and eventful; and, as I have already implied, it can be understood almost like a drama, a play in several acts with numerous scenes. Yet the narrative underpinning it all is one with which we are all familiar, because it is captured in the Gospel of the Mass – the disciples journeying with Jesus on the way to Emmaus. For, as with those disciples, throughout his life, Owen journeyed with Jesus, conversing with him in prayer, listening to Jesus’ words and allowing them penetrate deeply into his own heart; then translating those words into action in order to reach out and introduce the Son of God to others, so that they too could come to know and follow him.

For Owen, that work always culminated in the Eucharist; for it is there, by partaking of the bread sacramentally consecrated by Jesus, we can bring all our own experiences and endeavours to him, so that he might integrate them fully into the kingdom that he has established and our lives may be utterly transparent to his divine life in union with the Father and the Holy Spirit.

Having exited the stage of this life just a few days ago in the company of some of his close family, we now pray that the Father, Son and Holy Spirit will welcome him into the heavenly family of Mary and all the saints who are gathered in eternal worship. As we formally bid adieu to Owen, may his journey of faith and love in the company of Jesus here on earth come to perfect fulfilment; may he now be reunited with all his loved ones in the kingdom of God, and may the rich legacy of his missionary life continue to bear abundant fruit for that kingdom in the years ahead. Amen.