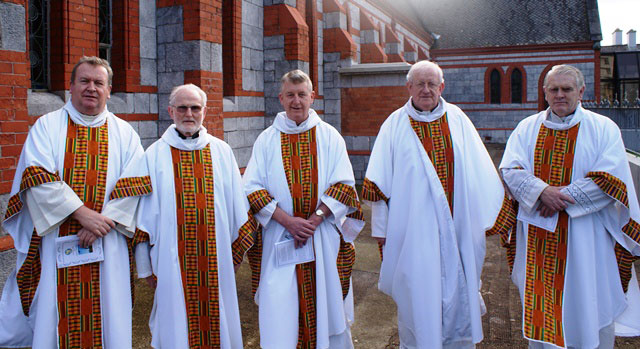 The SMA Provincial Leader, Fr Fachtna O’Driscoll, was the Principal Celebrant and homilist at the Funeral Mass for Fr Martin Nolan SMA at St Joseph’s SMA Church, Wilton, Cork at 12 noon on 1 February 2013. His remains arrived in Wilton on Thursday evening. See Report on the Reception of the remains here.

“Death is not the cursing of the dark because the light has gone out, but the extinguishing of the lamp because the dawn has come”.

The dawn of transformed life opened for Martin Nolan at c. 9.15pm on Tuesday night last. It was in the end a very gentle passing over after days and even weeks of fairly acute unsettlement. It was the mercy of God that granted him the final hours of serene peace. For that we give thanks to God.

I quoted these very lines, that we all learned at school, from the poet Raftery, on this very day last year when we buried here our much loved honorary member, Sadie McDonagh. Apart from the Easter Octave itself, it is hard to imagine a more ‘resurrection-tinged’ day to be buried than the first day of Spring. La Fheile Bride, St Brigid’s Day – secondary patron of Ireland. Signs of new life are budding up all over nature. Such signs support a faith position that attests that in human life, too, death signifies a change rather than an end. On this day we gather to pay our final respects and bid a fond farewell to a gentle and much loved confrere, Martin Nolan. His family, his friends and his companion brothers and priests gather round his mortal remains today to pray him home to God. And we give thanks this morning for a long life well lived. A life of persevering commitment to the call to missionary priesthood. And as we give thanks we also pray to the God we know only as merciful that he will receive Martin home into the bosom of the Father, the Son and the Spirit. There he will be able to perform two tasks for us: continue to walk with us as a companion, albeit now on the spiritual plane; and be our advocate, our patron, the one who can intercede for us all as he lies close to the breast of the Lord.

Our gospel reading today is that familiar passage where the Lord reminds his disciples that they must be dressed and ready for action. This referred most probably to the necessity to be always ready to advance the kingdom; but it can equally be interpreted, as the Church has done so down the ages, as a reminder that we are not in control of life. It is in God’s hands to give and to receive. And, so, it is necessary to be prepared when the Lord sends that invitation. My sense is that Martin was ready for this call. Martin prepared with meticulous attention to detail for every event in life. He certainly would not have taken the chance of appearing before the Lord ill-prepared.

Born into a family of seven children, four boys and three girls on May 8, 1934, Martin grew up in that famed hurling country around Oylegate and Glenbrien. He went first to the local school, before tuning in to a possible call to be missionary and so headed off to the SMA minor seminary at Ballinafad. From there he proceeded on the SMA formation road, taking a BA degree in UCC along the way, before ordination at Lurgan on 10 December 1961, in that unique televised ordination ceremony. Assigned to the diocese of Jos in Nigeria, he was to spend the next twenty two years in loyal service to the people of the Plateau. Ten years in teaching posts in St Murumba’s, Barakin Ladi minor seminary and Kafanchan Teacher Training College were followed by twelve years in parish ministry at Pankshin, Akwanga and Langtang. Ill health dictated that he could no longer live in the

tropics, so he spent a pleasant two and a half year spell as curate in Castlehaven parish in West Cork. Since 1987 he has been ministering at various tasks for the SMA community in Dromantine.

The opening reading this afternoon from the prophet Isaiah paints a beautiful pastoral scene where the Lord is depicted as a shepherd gently caring for his flock. “He is like a shepherd feeding his flock, gathering lambs in his arms, holding them against his breast and leading to their rest the mother ewes”. For me this reading captures some of the gentleness that Martin displayed. This reading also carries that beautiful message of consolation. The promise is that the time of service will be ended and sin atoned for. That promise from the Old Testament was fulfilled through the passion, death and resurrection of Jesus Christ. He took upon himself the sin of all humanity and redeemed it. That is the promise that sustained Martin Nolan into his 79th year. It was the promise that inspired him to commit over fifty years of his life to missionary priesthood in the SMA.

Universally regarded as a ‘gentle’ gentleman, Martin displayed this gentleness of the shepherd in different dimensions of his life: on the hurling field, where the skills which enabled two sibling’s to collect All Ireland medals were also visible in Martin’s play; he displayed it in his teaching profession and later as a parish curate or when dealing with his confreres, lay staff and mission supporters at Dromantine.

The passage also suggests a softer image of God than what we often see. In fact, many scholars suggest this is a clear expression of the feminine dimension of God, which offsets the often harsher, judgemental, more masculine image presented. And, in a way, that too is fitting to Martin’s character. There was in Martin a kindness and a decency, a gentleness and a courtesy that belied an exterior that sometimes suggested discomfort with physical closeness. His was a personality that attracted the affection of many.

However, before we get carried away in extolling Martin’s virtues the second reading reminds us that it is not really who we are or what we do that saves us but simply the sheer compassion of God. It is worth listening to Paul again as he writes to Titus: .. it was for no reason except his own compassion that he saved us, by means of the cleansing water of rebirth and by renewing us with the Holy Spirit which he has so generously poured over us through Jesus Christ our saviour. He did this so that we should be justified by his grace, to become heirs looking forward to inheriting eternal life.” Martin, like all of us, will be saved through the mercy and compassion of God but his life response to the graces received was generous and sincere.

Aligned to Martin’s gentleness was a quality of steel. He was conscientious, compassionate, committed, courteous and tremendously loyal, but he was no push over. Martin held firmly to strong views on all matters sporting and ecclesiastic. He was the loyal servant of the gospel who in his thinking did not move far outside the box, to use the latest jargon. But within that box he was utterly trustworthy. His attention to detail was legendary, whether it be the counting of the pennies in the Treasury, the security of doors and windows at night, the perusal of car number plates to ascertain their provenance and possible purpose, or the celebration of liturgy. In all things he was nothing but meticulous.

So, as we say our final farewell to Martin this afternoon we know we will miss him dearly. Now we will look for him in the very presence of God himself. Because God has told us that it is so. It is Jesus’ wish that we be with him, as our gospel proclaimed to us today. God has desired Martin since his very conception to be with him for all eternity. We trust that he is already on the way.