Fr John Quinlan passed to his eternal reward on 16 July, 2020, at the St Theresa’s Nursing Unit, African Missions, Blackrock Road, Cork. He was 83 years of age and had been in failing health for some years. His Funeral Mass took place on Saturday, 18 July, at St Joseph’s SMA Church, Wilton, Cork, in accordance with Government and Church Covid-19 regulations.

Four of Fr John’s siblings, Tommy, Marie Murphy, Phil Casey and Adrienne Young along with other family members participated in the Funeral Mass which was celebrated by Archbishop Kieran O’Reilly SMA, Archbishop of Cashel and Emly.

Fr John’s brothers, Fr Patrick and Monsignor Micheál, were unable to travel from England due to the two-week isolation requirement but participated via the parish webcam.

The following is an edited version of the homily, preached by the Irish Provincial Leader, Fr Malachy Flanagan SMA. 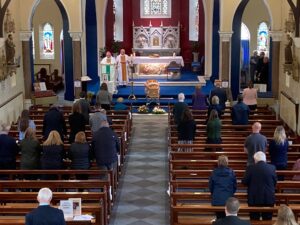 We are gathered here today to formally return a dear and good friend, a family member, and an SMA confrere to his Creator. We present Fr John Quinlan back to God with gratitude, for his presence among us has been a blessing, not just to his family in Tralee, or to his SMA confreres but to all who knew him and were touched by his life among us. We bring Fr John back to this house of God here in Wilton and we place his coffin before the Pascal Candle which speaks to us of resurrection and new life with God. And we now celebrate a Requiem Mass and ask God’s forgiveness for his human shortcomings and commend him to the God whom he served faithfully for almost 60 years as a missionary priest – and we pray that God receives and welcomes him home to the Father’s House.

To the Quinlan Family, his sisters: Marie, Phil, and Adrienne; his brothers: Tommy, Fr Patrick, and Monsignor Micheál – I would ask that you also thank God, for your brother John was a great human being, a man you have every reason to be proud of, and a man who brings honour and distinction to your family.

The readings of our funeral Mass today speak to us about our faith in God and about our belief that our loved ones are “in the hands of God… They are now at peace… God has put them to the test and they have proved themselves worthy to be with him. They who trust him will understand the truth, those who are faithful will live with him in love; for grace and mercy await those he has chosen”. These are comforting words to us as mourn the loss of Fr John. The second reading reminds us that we believe that Fr John, having died with Christ, he shall return to life with him. Death has no more power over him. Jesus holds the key to life and death. Jesus, by experiencing death and rising from the dead has broken the power of death forever. We are sad now because death has claimed the life of our loved one – Fr John. But we should not be overwhelmed by it. What sustains us now is our faith and hope in Jesus – who is the resurrection and the life – that there is life after death. Fr John has gone home to be reunited with his parents, his brother Oliver, his brother-in-law, his niece, nephew, relatives and friends – all gone before him.

Fr John Quinlan was born on the 2nd of August, 1936, in Tralee, Co. Kerry. He was one of eight children born to his parents Thomas and Mary (née Daly). For his primary and secondary education, he attended the CBS in Tralee. In September 1953 he entered the SMA Novitiate at Cloughballymore in Co. Galway. Then in 1954 he moved to the SMA College in Wilton, Cork, and followed a degree course in University College Cork. By 1957 he proceeded to the SMA Major Seminary in Dromantine for his studies in Theology and was ordained a priest on the 21st December 1960 at Newry Cathedral – being one of twenty-four ordained in that class.

After his ordination, he was sent to Rome to continue his studies. He graduated in 1962 from the Angelicum University with an STL in Theology and three years later in 1965 he graduated from the Pontifical Biblical Institute with a Licentiate in Sacred Scripture.

In 1966 he was appointed to Nigeria where he spent two years working firstly in the then diocese of Benin City in a pastoral assignment and then the following year teaching bible studies in SS Peter & Paul Major Seminary in Ibadan.

Fr John was a very keen sportsman and a huge supporter of the Kerry team. He played on the CBS teams in Tralee during his school years, winning a Kerry and Munster Colleges Championship Medal in his final year. In that same year, he was on the O’Rahilly’s Senior Football panel and was brought on as a sub in the county semi-final as the team was trailing their opponents. His skill – even in one so young – was such that the Team Manager was not afraid to put him in at right corner-forward, with a Kerry Senior County player marking him. Within a few minutes, O’Rahilly’s took the lead and won the match. The following day, John left to join the SMA.

The County Final was the following Sunday! And even though requests were made for John to be allowed return home for the final – unfortunately, due to the way things were at that time this was not allowed. However, O’Rahilly’s did win the final and Fr John got his Senior Championship Medal. When home on holidays, even after Ordination, he often togged out when called upon!

In 1968, having come home from Nigeria, he was appointed to the teaching staff of our SMA Major Seminary at Dromantine – a place he was very familiar with having done his own priestly training there. He was to spend the next four years there teaching bible studies and theology to our students. Then with the transfer of our students from Dromantine to Maynooth, John also took up a teaching post as lecturer in General Theology in Maynooth College until 1976. A break from Maynooth College saw him taking over as Education Officer for the Irish Missionary Union (IMU) for one year. Then in 1977, he was asked to go on study leave for one year at the School of Oriental and African Studies, University of London. He graduated with an MA in 1978 and came back to teaching and lectured in the Mission Studies Department in Maynooth College until 1983. During that time, he was also Director of Studies at the SMA House in Maynooth.

Fr John died on the 16th of July, the feast of Our Lady of Mount Carmel. John was a biblical scholar and had a great love and passion for the scriptures. So not only did he study the scriptures but like our Lady, he would have prayed over them, pondered over them in his heart, searching for their true meaning and relevance in today’s world. We know that Mary pondered the words of Jesus in her heart, often not knowing or understanding what they meant. But it was in the pondering and reflecting that Jesus reveals himself and Fr John through his ministry as teacher, preacher, and leader showed us a Jesus who was compassionate, loving, and merciful.

The Gospel today speaks to us about comfort and reassurance, about support and trust; about gentleness and humility and about handing over our lives to God. Allowing God to carry our burdens for us. “Come to me, all you who labour and are overburdened, and I will give you rest”. The struggles and the ups and downs of life – we are not meant to carry these by ourselves. In fact, we shouldn’t even try. Jesus invites us to come to him and unload our worries onto him. At a time of sadness and loss, we would do well to accept the Lord’s invitation to come to him who is gentle and humble of heart. In his presence we will find rest and peace.

In 1983, Fr John was a delegate to both the SMA General and Provincial Assemblies. In that same year, he was elected Vice Provincial of the Irish Province with responsibilities for recruitment, formation, personnel outside Society works and for SMA parishes. In 1989, he was elected as Provincial Superior for a term of six years. In 1995, he was re-elected as Provincial and remained in that role until 2001. So, for a period of 18 years, he served in leadership positions of the Irish Province. Fr John will be remembered as a very caring Provincial. He showed great empathy, interest and concern in the welfare of his SMA confreres. He was a great teacher, a great preacher and had a great ability to put words together. He was really gifted in that area. During his summer periods, while he was on the teaching staff in Maynooth College, he availed of opportunities and requests to visit different countries in Africa to facilitate workshops, retreats and seminars to different diocesan personnel, religious congregations and to our own SMA confreres. Visits to Africa continued during his time as Provincial when he visited Irish SMA’s in their mission fields and offered his encouragement and support.

As Provincial and in his concern for the wellbeing of our SMA members, he initiated the refurbishment of our houses in Ireland to meet the needs of our aging members. In 1998, Fr John was present at the opening and blessing of St Theresa’s Nursing Unit in Blackrock Road. This was built to care for the medical needs of our SMA members who were aging and their need for care was becoming more evident. Little did Fr John know that one day he would benefit from the medical care and attention so warmly and homely received from the nursing staff and carers in St Theresa’s.

needed more and more care which he received in St Theresa’s and for which we are deeply grateful to the nursing and caring staff there.

Fr John has gone home now to God. He is at peace. He is now at rest – the rest promised by Jesus. At a time like this, we all have memories and stories of Fr John in our hearts. They are precious and every time we recall them we are reminded of just how special Fr John was to all of us.

At the conclusion of the Funeral Mass Archbishop O’Reilly spoke of Fr John’s great love for the Scriptures, not only teaching it but, like our Blessed Mother Mary, pondering God’s word in his heart. In light of that, he invited us to listen more closely and treasure the words of the Scriptures. The Archbishop also spoke of Fr John’s essential support in the development of the SMA over the past 40 years. The SMA is now a growing international missionary Society with priests from many African countries, Philippines, Poland, and India.

Before the Prayers of Final Commendation, Fr Flanagan quoted from a message sent by the Archbishop of Tuam, Most Rev Michael Neary, who spoke of Fr John as an inspirational priest who gave great support and encouragement to those he taught and to his teaching colleagues in St Patrick’s College, Maynooth.

Following the Mass, Fr John was laid to rest in the adjacent SMA community cemetery.