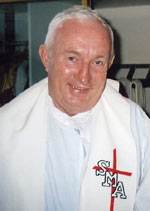 The principal celebrant of the Funeral Mass was Archbishop Giovanni Tonucci, Apostolic Nuncio to Kenya. He was assisted by, among others, Archbishop Raphael S Ndingi Mwana ‘a Nzeki of Nairobi, Bishop Cornelius Schilder MHM of Ngong, Bishop Patrick Harrington SMA of Lodwar, Bishop Maurice Anthony Crowley SPS of Kitale and Bishop Noel O’Regan SMA of Ndola (Zambia) a classmate.

10 members of Fr Hannon’s family travelled from Ireland to Kenya for the funeral.

A Remembrance Mass was celebrated in Blessed Virgin of the Rosary Church, Newmarket-on-Fergus on Friday 10 December. Bishop William Walsh, Bishop of Killaloe was the principal celebrant. Fr Fachtna O’Driscoll delivered the homily which can be found below on page 3.