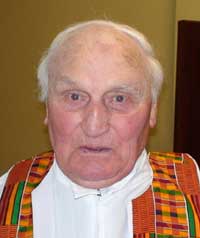 Fr John A Creaven SMA passed away on Tuesday 02 December 2008 at St Theresa’s Nursing Unit attached to SMA House, Blackrock Road, Cork.  He had been in quite good health until recently and had been hospitalised for about ten days but his condition deteriorated rapidly.  He returned to Blackrock Road House on Tuesday and passed away at 8.30 p.m. He was aged 91 years.

John was born on 1st April 1917 at Caherlea, Cummer, Co Galway in the Archdiocese of Tuam, son of the late Michael and Julia (Glynn) Creaven.  Of a family of seven, he was predeceased by his two brothers Michael (Sonnie) and Patrick and by his four sisters, Margaret, Mary (Glynn), Delia (Hogg) and Julia (Mannion).

He entered the SMA Juniorate at Sacred Heart College, Ballinafad, Co Mayo in 1932 and the SMA Senior Classical College at Wilton where took the Intermediate Certificate in 1935 with Honours in every subject including 100% in Latin.  He matriculated in 1936 and began studies at University College Cork taking First Arts in 1937 with First Class Honours in four subjects that included two first places and two second places in the University and was awarded an Exhibition but was unable to avail of it as he entered the SMA Novitiate at Cloughballymore, Kilcolgan, Co Galway. He continued his university studies at University College, Galway and he graduated with BA in 1939 with First Class Honours and a post-graduate scholarship. With this scholarship he specialised in Philosophy and took his MA with First Class Honours in 1941 with a thesis “The Philosophy of Personalism” which was adjudged the best of the seven theses presented that year to the NUI.  For this he was awarded The Travelling Studentship in Philosophy.  He entered the SMA Theological College at Dromantine, Newry, Co Down in 1941.

He became a temporary member of the Society of African Missions on 2 July 1939 and a permanent member on 12 June 1943.  He was ordained to the priesthood on 17 December 1944.  In 2004 he had the honour of celebrating the Diamond Jubilee of his ordination.

After ordination he was appointed to the staff of the SMA House, Cloughballymore, Co Galway as Professor of Philosphy.  From 1949 to 1952 he studied at Cambridge University and was conferred with PhD in 1956.

He retired from active ministry in 2007 at the age of 89 and took up residence at the SMA House, Claregalway.  Due to failing health he transferred to SMA House, Blackrock Road, Cork in 2008.

After reposing at the SMA Community Chapel, Blackrock Road, Cork, Fr John’s remains were removed on Thursday evening, 4 December, to the nearby St Joseph’s SMA Parish Church, Blackrock Road, Cork where they were received by the Parish Priest, Fr Tommy Wade SMA.  The concelebrated Funeral Mass took place on Friday, 5 December.  Bishop Martin Drennan, Bishop of Galway, was the main concelebrant and was assisted at the altar by the Provincial Leader, Fr Fachtna O’Driscoll SMA, who preached the homily.  They were joined by numerous SMA priests and priests from the Diocese of Galway.  Fr Colum O’Shea was the MC and Fr Angelo Lafferty led the singing. Following the Mass interment took place at the SMA Cemetery, Wilton, Cork.

He is sadly mourned by his brother-in-law, Seán Mannion, and his many nieces and nephews, relatives and friends.